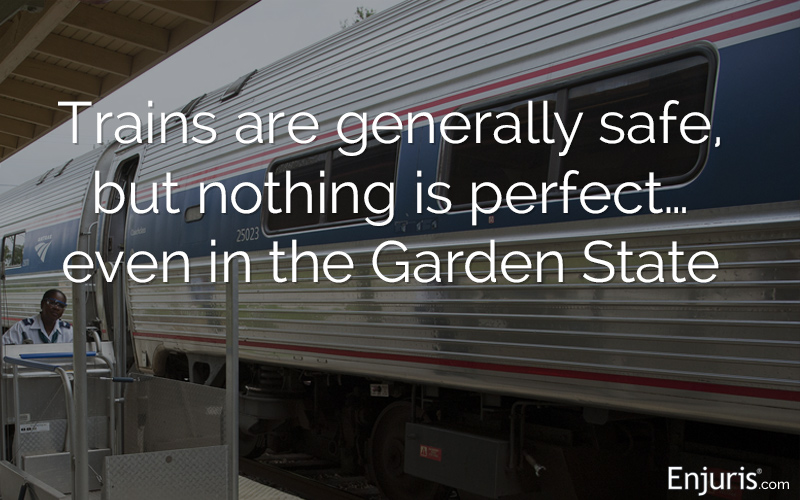 The answer: It depends. There could be several factors that affect liability in a train crash.

Table of Contents + show
The answer: It depends. There could be several factors that affect liability in a train crash.
New Jersey train travel
Types of railroad accidents
6 most common causes of train accidents:
Who’s liable for a train accident?
How you can avoid a train crossing accident
Railroad employee injuries
What to do after a New Jersey train accident injury
Statistically, trains are a very safe form of transportation. But when an accident happens, there can be a variety of legal questions about liability — whether it’s on the train operator, the company or agency that maintains the railway, or the driver who caused a collision on the tracks.

On September 29, 2016, commuters left their homes and headed for work. Train #1614 on the Pascack Valley Line left the Spring Valley station in New York at 7:23 a.m. bound for Hoboken, New Jersey. At 8:45 a.m., the train entered the Hoboken Terminal, a major transportation hub for the New York metropolitan area. It was then that the train went over the bumper block and through the rail concourse, finally stopping just before the station’s waiting area. There were 114 injuries and 1 fatality.

Twenty years earlier, in 1996, 2 New Jersey Transit commuter trains crashed at what used to be Bergen Junction in Secaucus. That was also a morning rush hour collision, and there were 3 fatalities and 162 injuries. The fatalities were both trains’ engineers and 1 passenger.

Overall, train travel is exceedingly safe, despite these memorable stories. Nationally, there were more than 700 railroad-related deaths in 2014, but only 5 were the result of a train accident. The majority were people trespassing on train tracks.

Facing factsMore than 300,000 New Jerseyans use the commuter rail lines on the average weekday.

Not all train travel is for commuters. Many people also prefer trains as a convenient and stress-free form of transportation for longer-distance travel between cities. Amtrak offers service from Newark, New Jersey to New York, Washington, Philadelphia, and connections along the East Coast.

6 most common causes of train accidents:

Who’s liable for a train accident?

Any transportation company that carries people or property from one location to another is called a common carrier. That means railroad companies like Amtrak and NJ Transit are both common carriers, and they have a duty of care to keep passengers safe.

What are a railroad company’s responsibilities to its passengers?

Among these federal regulations are limits on the number of hours a train engineer or operator may work without a break. It’s crucial that train personnel get adequate sleep between shifts in order to perform at their best capacity when driving the train. However, fatigue is still a big problem in the train industry.

In some circumstances, a train driver is required to turn a train around and return it to a starting point for a new run before the driver can take a break — and that can mean a very long shift. And, not every train operator follows the rules. Train engineers do occasionally fall asleep on the job.

How you can avoid a train crossing accident

Stay clear of a moving train.

Most trains aren’t filled with passengers — they might be cargo or freight trains and could be carrying hazardous material like toxic chemicals, flammable gases, or fluids. There’s always a risk that something could happen that would cause chemical leakage. Even if you’re certain you’re too far away to be hit by the train, you should maintain enough distance to be safe from any kind of substance that might be leaking.

You don’t know the train schedule (even if you think you do)!

Don’t assume you know exactly when the train will come. Even if you routinely cross tracks on your way to work or you can hear a train whistle from your home every day at a specific time and you’re “sure” you know when to expect it — you don’t. There are lots of reasons why a train schedule might change; weather, loading issues, personnel, etc., could all cause delays or changes. Always take the same level of precautions when approaching or crossing tracks, even if you think the train has already passed.

A train is heavy and large. Think of the size and weight of a train as compared to your car. No contest.

Consider the amount of time it takes your car to come to a full stop. If you’ve ever had to brake suddenly, you know that passenger cars, while very responsive, don’t stop on a dime. A train takes even more time to stop, in part because the engine has hundreds of thousands of additional pounds behind it. By the time the conductor sees a car or person on the train tracks, it’s likely already too late to stop a moving train before a collision.

A locomotive can be 10 feet wide and 17 feet high. They’re streamlined, which gives the appearance of being farther away down the track than they actually are. If you hear or see a train, stay off the tracks until it has passed, even if it looks or sounds like it’s far away.

Railroad tracks aren’t intended for walking, hiking, biking, motorcycling, photography, or other activities. Railroad fatalities often happen because people use train tracks for these kinds of purposes and they don’t see or hear a train approaching.

Almost every person in this country who’s employed by another person or business is covered under workers’ compensation insurance.

Workers’ compensation insurance is a system of benefits to compensate for medical treatment and lost wages for a person who’s injured while performing their job. When a person covered under workers’ compensation is injured at work, they don’t need to prove (or even claim) fault or negligence. You only need the injury to have happened during the course of your job.

Railroad employees are an exception.

If you’re a railroad employee who has been hurt on the job, you’d file a lawsuit under FELA. Unlike a workers’ compensation claim, though, a FELA lawsuit requires the injured worker to show that the railroad worker was negligent and that their negligence caused your injury.

What to do after a New Jersey train accident injury

If you’re involved in a train accident, there are 3 legal questions that you need to ask before pursuing a claim:

If you were injured and your injuries resulted in medical costs or lost wages, you’re entitled to make a claim.

Because of the size and shape of a train, it’s possible for a train to be involved in an accident — even a serious one — and most passengers won’t be injured. Or, you could suffer minor injuries like small bruises that don’t require medical treatment.

If you were a passenger on a train that was involved in an accident but you were not injured (or your injury was very minor and required no medical treatment), you cannot make a claim. You can’t recover damages unless you had an actual injury and that injury cost you money.

After a personal injury accident, you can seek damages for:

In a wrongful death case, you can recover expenses related to the deceased person’s medical expenses, funeral and burial costs, loss of wages, and sometimes punitive damages.

Liability issues, federal and state regulations, and other complex questions surrounding a train accident usually mean that you’ll need an experienced lawyer to handle your claim.

What if a lawyer comes to me after a train accident and offers to take my case?

Legal ethics prohibit a lawyer from soliciting your business if you don’t have a preexisting relationship. In all likelihood, a train accident will be newsworthy because it’s unusual. A lawyer might seek out people who were involved in the accident (either because a news outlet published your name, you were interviewed, or by receiving information from other involved individuals) and come to your home (or even the hospital) and offer their services.

This practice is not permitted. You shouldn’t retain the services of a lawyer who approaches you for business because they became aware that you were in an accident. For one thing, they’re already breaking the legal code of ethics, so that gives you one indicator that they’re not the most trustworthy.

Second, you should take time and find the lawyer who’s the best fit for you — which might not be the one who gives you an unsolicited call.

If you’re looking for a New Jersey train accident lawyer, you can begin with the Enjuris law firm directory. You can also use these helpful resources: