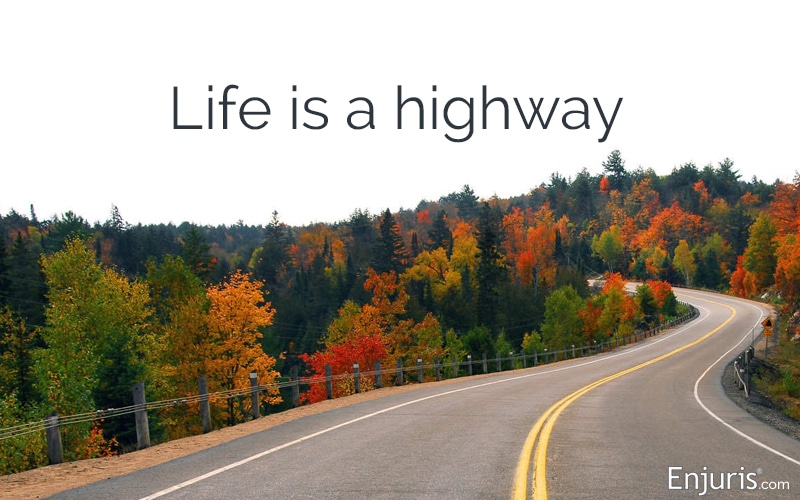 According to the Centers for Disease Control & Prevention, the leading cause of death in recent years for individuals between the age of 1 and 44 is unintentional injury. Unintentional injury includes falls, poisoning, drowning, car accidents, and any other accidental injury. Even in 2020 when the pandemic dominated the news, unintentional accident fatalities outnumbered deaths from COVID-19, heart attacks, and other medical conditions.

The pandemic has changed a lot of things for many people, but unfortunately the high rate of car crashes and fatal wrecks wasn’t one of them. It might have seemed like there were fewer people on the roads, especially during the early months of the pandemic in 2020, and you might think that would lead to fewer crashes and fatalities.

However, that’s not what actually happened.

Even though drivers traveled fewer miles, there were more car accident fatalities in 2020.

Table of Contents + show
Even though drivers traveled fewer miles, there were more car accident fatalities in 2020.
If people drove fewer miles, why did traffic fatalities spike?
What happens next?
What can you do to stay safe on the roads?

The National Safety Council (NSC) reported that motor vehicle fatalities rose 8% in 2020, which amounted to more than 42,000 vehicle crash deaths. As compared to the number of miles driven in previous years, the fatality rate rose 24%. The NSC said it’s the highest spike in nearly a century.

Car accident deaths rose sharply in 2020, despite the pandemic. It was the highest spike in nearly a century.  Tweet this 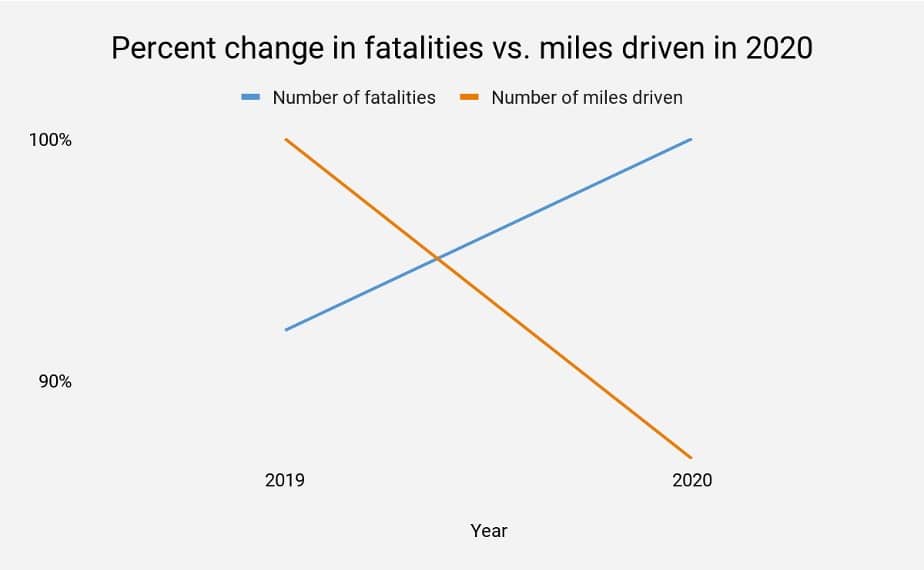 If people drove fewer miles, why did traffic fatalities spike?

One possible reason is that the people who are traveling by car are driving in a riskier, more dangerous way. For some people, emptier roads mean faster speeds. They feel empowered to speed, use mobile phones while driving, and engage in other behaviors that would make driving more dangerous.

In addition, while commuter traffic has decreased because of the percentage of the workforce working from home during the pandemic, many people who are reporting to work on-site have begun driving personal vehicles because they don’t want to use public transportation like buses or trains.

Unfortunately, now that more drivers are returning to the roads and more areas around the country are beginning to see morning and afternoon rush hours again, drivers are continuing to speed. And it’s not “minor” speeding, like doing 45 mph in a 40 mph zone. The number of drivers traveling at speeds higher than 80 mph increased during 2020. (source)

However, not every state saw an increase in fatality accidents.

Here’s a look at the states with the highest and lowest changes in car accident fatalities in 2020:

Facing facts:In addition to fatalities, there were an estimated 4.8 million serious injuries from traffic accidents in 2020. That’s an 8% increase from about 39,000 in 2019. (source)

People talk about the “new normal”. While the phrase is cliché, it’s not wrong. How we work and live moving forward will likely be different from how we were before, for better or for worse.

Experts say that the increased speeds are likely to continue because there will still be fewer cars on the road, at least for a while. Many large (and small) companies are moving to full- or partial-remote work, and commuting might never return to pre-pandemic levels.

One study that highlighted the increases in road fatalities says that the incidences of fatalities and injuries could be reduced by lowering speed limits and creating additional safe spaces for pedestrians and bicyclists.

The NSC recommends that as people begin to return to workplaces outside their homes, employers remain sensitive to issues like employees driving while under “unusual stress or exhaustion” or that they might be out of practice driving if they’ve not done it often during the past year.

What can you do to stay safe on the roads?

First (and most importantly), remember that just because the road seems uncrowded, it doesn’t mean you can drive as fast as you want. You still need to follow speed limits and road rules — for your own safety and the safety of others.

If you’re in an accident or if you’ve tragically lost a loved one in a car accident, find help. A qualified, experienced personal injury lawyer can advise you of your rights to financial recovery and how to get there.

If you need an attorney, you can use the free Enjuris law firm directory to find a lawyer in your state who’s ready to take your case.