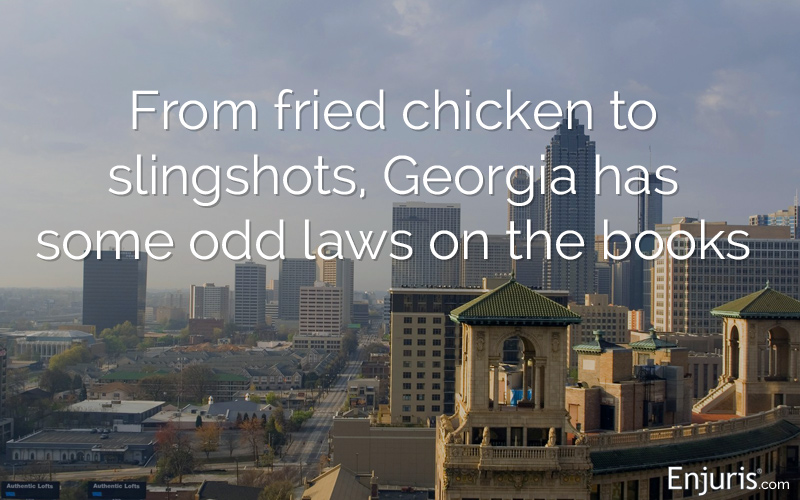 As the late English novelist Arnold Bennett once said: “It’s a jolly strange world.” And though Bennet was referring to his marriage, he could just as easily have been referring to the Georgia legal code.

Regardless of the reason, Georgia has its fair share of strange laws. Let’s take a look at some of the strangest.

The 10 weirdest laws in Georgia

Table of Contents + show
The 10 weirdest laws in Georgia
Are strange laws enforced?
Bonus law: Though it’s not a strange law, many Georgians don’t realize that when approaching a stationary emergency vehicle with flashing lights, Georgia law requires drivers to make a lane change into a lane not adjacent to the emergency vehicle if possible.

The law, commonly called the “move-over law” is common courtesy, but it may also protect you from liability should you sideswipe the emergency vehicle or, even worse, collide with emergency personnel.

If a law is on the books, it can be enforced. With that being said, many strange laws are outdated or passed as publicity stunts and stand little to no chance of being enforced.

In 2018, a 91-year-old woman was “arrested” at the Longstreet Cafe for violating the ordinance, but she was quickly pardoned by the mayor who was present in the cafe. The arrest was a practical joke intended to promote the town’s annual Spring Chicken Festival.

Have you violated any of these ordinances? Tell us about your experiences below.