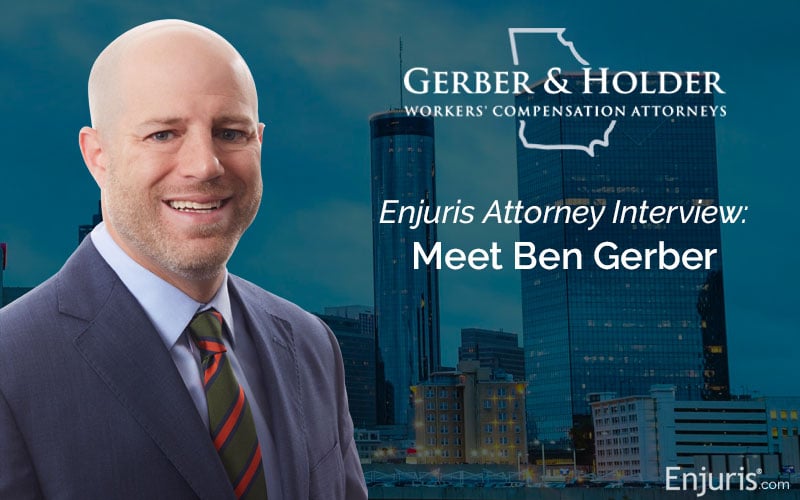 Table of Contents + show
Fighting the good fight: father, lawyer, courtroom referee, hero
Attending law school
Seeing both sides
Hanging a shingle
Advice to future lawyers
Advice to those looking for an attorney
Out of the courtroom

When asked why he became an attorney, Ben Gerber thought immediately of his father.

“He was my hero and he was a lawyer and it was all I ever wanted to be,” Ben said. “When I was a little kid, he used to come home with case files in his briefcase and work at night. It was the highlight of my day to watch him work out problems.”

“I had a family law professor,” Ben recalled. “While studying a certain law, she could see that I was bothered by it. I felt the law was unfair and quite possibly unconstitutional. Her advice to me was: do something about it.”

He went on to say:

“I’ve always taken that approach to the field of workers’ compensation in Georgia. If you don’t like something, don’t just complaint – be proactive.”

While attending law school, Ben helped individuals stand up to large corporations by participating in the law school’s Consumer Affairs Clinic. He also held internships at the Department of Justice and the United States District Court for the District of Columbia.

After law school, Ben returned to Georgia and began practicing insurance defense. The time was invaluable, as he learned the ins and outs of workers’ compensation from an insurance perspective.

But Ben has always been troubled by the obstacles facing injured employees.

“There are times I just want to scream at some of the inherent disadvantages injured workers have in the current system,” he said.

And so—harkening back to the advice he received from his family law professor—Ben decided to be proactive and make the move to represent plaintiffs in workers’ compensation cases.

“It was the best move I ever made.”

After spending several years at private law firms helping plaintiffs, Ben opened his own office. “It allowed me to focus solely on helping those who have been injured on the job,” he reflected.

Founding his own law firm has given Ben some insight on hiring young lawyers. “Be the attorney that you would want to hire,” Ben advised when asked what advice he would give to new lawyers.

“In looking for an attorney, you want someone who knows what they’re talking about and can handle all the unexpected events that inevitably arise. People are smart, they can tell if you have no idea what you’re talking about. Spend a year just researching the area of law you want to practice so you can speak intelligently about the field.”

Advice to those looking for an attorney

Ben also has some advice for those thinking about hiring an attorney, whether it’s him or someone else:

“The first thing a person should look for is somebody who listens,” Ben said. “Each case is special and has a distinct set of facts; make sure you have an attorney who understands that.”

A good start is to look for an attorney who spends most of their time practicing in the field that is relevant to your issue. “An attorney who is a jack of all trades may not be aware of all the nuances in a specific area of law,” Ben said. “This is particularly true in the workers’ compensation arena.”

And once you’ve found an attorney, Ben implores you to be patient.

“Workers’ compensation is a process. It requires a lot of work to develop evidence, get medical treatment, and depose witnesses. Even though [a client] might be completely right, and they should be receiving weekly benefits and medical treatment, it requires a fight. The wheels of justice grind slowly sometimes, but with some patience, we can get the proper result.”

Out of the courtroom

Ben spends a great deal of time working for his clients, and that’s okay with him. “The hardest part of my job is creating time. My days seem to fly by.”

But when he does find extra time, Ben enjoys spending it with his family.

“I have three children ages 13, 11, and 9. The two oldest play academy soccer so we are usually traveling to soccer matches on weekends.”

If Ben wasn’t an attorney, his life might closely resemble his free time.

“I think if I wasn’t a lawyer, I would be a referee in a professional league. I played sports growing up and I would love to still be around the game. Being a referee would allow me to do that and see our great country by travelling to games.”

As it is, Ben spends his mornings helping his children get ready for school. Then, after a day spent talking with clients, handling depositions, attending court hearings, going to mediations, and solving problems, he heads home in the evening—usually with a briefcase full of case files.

It seems Ben has become his father. And we strongly suspect, a hero to his own children.