Accident Help (Home) » Injury Blog » The Power to Do Good 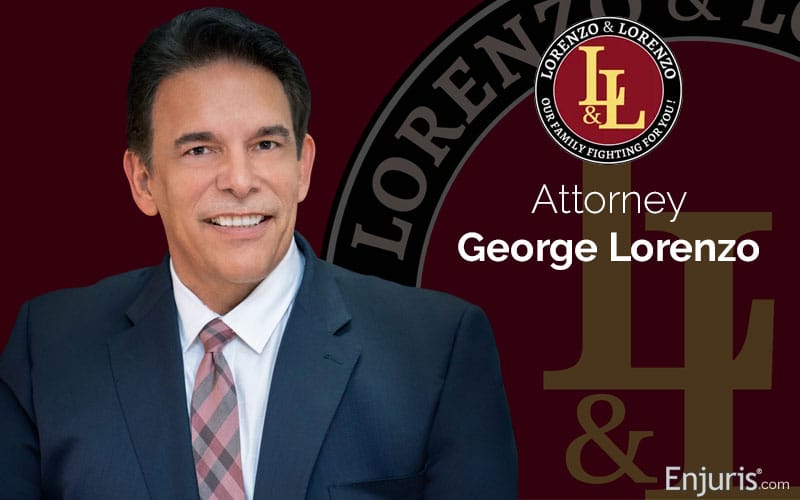 Table of Contents + show
George Lorenzo on the U.S. Army, Repping Soldiers and Prosecuting High Crimes
Early years, law school and then the Army
Desert Storm – and an incident involving a camel
Prosecuting and defending high crimes, and an ethical dilemma that cost a case
From public work to private law practice

The busiest week of George Lorenzo's life was probably when he became a U.S. citizen.

In Texas, students are allowed to take the bar exam during their last semester as long as they have a certain number of credit hours. Lorenzo said, "I graduated from law school, I got licensed, and I became a U.S. citizen the same week."

"I graduated from law school, I got licensed, and I became a U.S. citizen the same week."

To put it in perspective, he laughed and said, "It was kind of weird because I graduated today, then tomorrow I got sworn in by a federal judge as a lawyer, then that week I went and took my test for citizenship. … A lot of stuff happened for me in that week. It was a very happy time in my life."

Then shortly after that he took the Florida bar as well, where he practices today.

Early years, law school and then the Army

Lorenzo has always been busy. After coming to the United States from Cuba at the age of three (his uncle, a professional baseball player, had been bringing over as many members of the family as he could), he plunged into his studies, eventually ending up at the South Texas College of Law, where he set his sights on becoming a lawyer. That vision never changed or wavered.

"I was one of those kids," he said. "I never did any of that crazy stuff," he said, meaning parties or drugs. Anything that threatened his future as an attorney was out of the question.

He took on a lot of responsibility from a young age – he was signing all of his documents at school by the time he was nine – since his mother could not read English.

He couldn't quite pin down why he chose this career path – there were no other lawyers in his family.

"I like to say that I'm more American than Americans… [and] I always felt like I owed this country something," Lorenzo said. That was why he joined the Army after law school, becoming a lawyer within the Judge Advocate General Corps, colloquially known as the JAG Corps.

The JAG Corps is the legal branch of the Army, which at the time was technically the largest law firm in the world, handling literally every type of law – personal injury, contracts, compliance and environmental law.

"Frankly, my family was shocked," he said, "and my mother was really upset, not because I was going to serve my country, but because she thought something could happen to me. I said, 'Mom, we haven't had a war in 20 years!'

"Since we weren't in a war setting, I was reviewing Class I environmental site plans to make sure we were in compliance with environmental laws," Lorenzo said. "Commanders were personally responsible for failure to follow [them]." This was important because every time there were maneuvers or military fueling stations involved, there could be spills, and the Army was careful to minimize its environmental impact.

Desert Storm – and an incident involving a camel

Saddam Hussein shocked the world by invading Kuwait on August 2, 1990.

The invasion led to Iraq also threatening neighboring Saudi Arabia. If Saudi Arabia also fell, this would mean that one-fifth of the world's oil would be in the hands of Iraq and Saddam Hussein, who was already committing heinous war crimes in Kuwait. Saddam hadn't counted on nearby countries contacting the United States and NATO for help, but that's exactly what they did, with two-thirds of the Arab League condemning Iraq's act of aggression.

The Army spent the next few months preparing for their entry into the region. They gave Saddam until January 15, 1991, to exit Kuwait. That day came and went with no Iraqi response, so what had up until that point been Operation Desert Shield became Operation Desert Storm. Lorenzo went over in December of 1990 with Seventh Corps, which were the Army troops stationed in Germany at the time. By the end of February, it was mostly over. President H.W. Bush declared a ceasefire on February 28, 1991, and Saddam Hussein accepted the terms.

As chief of operational law during Desert Storm, Lorenzo's claim to fame was having his name in one of Tom Clancy's books

As chief of operational law during Desert Storm, Lorenzo's claim to fame was having his name in one of Tom Clancy's books, a biography of General Fred Franks. He was a three-star general who was an amputee from the Vietnam War who then became a four-star general after Desert Storm.

Lorenzo has other interesting stories from his time in Iraq as well, including an instance in which a soldier blew up a camel with a grenade launcher. At that point, Lorenzo had to be flown back to base so he could be sworn in as a Class A agent (as he was not allowed to carry cash prior to that). That way he could compensate the camel owner for the loss of his camel.

"You'd never think the military would be involved with a camel transaction," he said. "The Americans will always do the right thing. You file a claim against the military, and we will adjudicate it and pay it if it's just."

When Lorenzo returned to the United States ("I came home in July after Desert Storm so my mom could see I was in one piece"), the state attorney's office in Florida said that he had a job waiting for him whenever he wanted it.

"I never intended to make the military my career..." He ended up remaining in the Reserves for 11 years, all the way through 9/11.

"I never intended to make the military my career. I did it because I wanted to," he said. "I just joined. I volunteered." He ended up remaining in the Reserves for 11 years, all the way through 9/11.

Prosecuting and defending high crimes, and an ethical dilemma that cost a case

When he came back from Afghanistan, Lorenzo worked with the state attorney's office from 1992 to 1994, specializing in the prosecution of sex crimes against children.

Judge Dick Greco of the Thirteenth Judicial Circuit was overseeing one of his cases when Lorenzo realized that a star witness was being less than truthful on the stand. This put him in a quandary – let the witness perjure himself and win the case, which was an ethical violation of the utmost degree, or refuse to let the witness testify entirely and thus lose the case?

In 1994, he switched sides entirely when he was asked to become the bureau chief of the major crimes unit, supervising approximately 60 attorneys in the public defenders' office. He worked there for four years before starting his private personal injury practice in Tampa, FL, Lorenzo and Lorenzo, in 1998.

Prosecuting crimes was a great passion of his – "If I went to trial against you, I was going to convict you" – but Lorenzo put equal vigor into defending clients with the public defenders' office as well.

From clients who were robbing banks with AK-47s ("We have a Constitution! You don't get to violate it just because he's a bad person!") to those who were innocent of the crimes against them, he defended them all.

But the innocent clients were the ones who burdened him the most. "If you do your job, that person should go free. That aspect of it is very, very weighing on you," he said.

1998 was a busy year for George Lorenzo, much like the rest of his life. He went on active reserve duty for six months and lived in Miami to assist Colombia with the establishment of a JAG corps, which they did not previously have. Then, he and his wife Nancy, whom he'd met at a conference in the Alps, opened their own personal injury firm, Lorenzo and Lorenzo, which mainly focuses on personal injury and criminal defense, with perhaps 1% of immigration.

"The most complex case we had was where a gentleman was killed in a trucking accident and one of his heirs was a 12-year-old child in Cuba," Lorenzo said.

"The most complex case we had was where a gentleman was killed in a trucking accident and one of his heirs was a 12-year-old child in Cuba," Lorenzo said. At the time (around 2009), Cuba was not open to travel from the United States. This meant they had to convince the Cuban government to allow document signing, depositions and travel for both the child and his mother for the duration of the trial, as well as pre-trial motions and discovery.

Then they had to try the case in the most conservative county in Florida.

Another client was paralyzed in an accident, and Lorenzo helped him get a TrackChair to his house in Ecuador. Without it, the client had absolutely no independence and no way of making a living at his fishing camp in the Amazon. With the TrackChair, he has mobility and freedom.

"I still have a relationship with him!" Lorenzo said with a smile. "That case was from 2003."

The law is very satisfying for Lorenzo, and he plans to hand over the practice to his daughter when he retires – though that won't be for a while. She is due to graduate from law school this year.

Right now, however, he is content to find what time he can for boating and fishing when he's not in the office or spending time with his family.