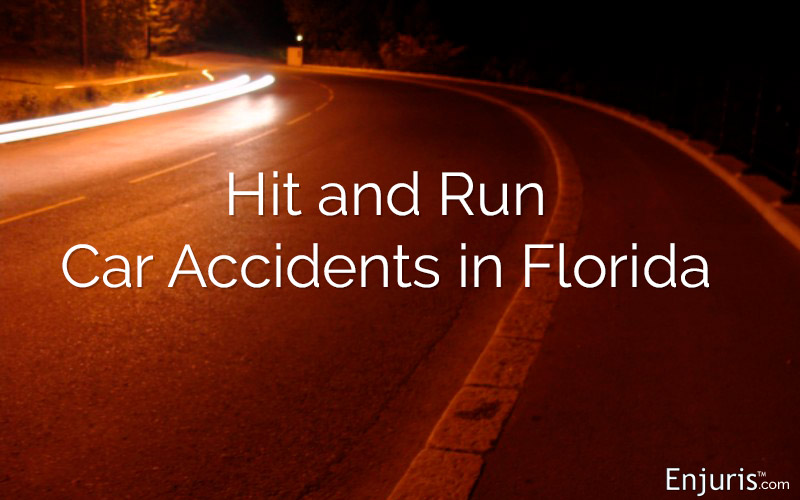 When a driver flees the scene of a car crash

Table of Contents + show
When a driver flees the scene of a car crash
Why would a driver leave the scene?
What should you do if you were injured in a hit and run in Florida?
Talk to a Florida lawyer who handles hit-and-run accidents

In Florida, after a car accident, drivers involved in the crash are expected to stay at the scene. Drivers should help anyone who is hurt if they can. If necessary, they should call medical professionals. Calling the police is also required by law.

A hit and run is when one of the drivers leaves the accident scene instead. Usually it’s the driver at fault.

It’s also considered a hit and run if the driver hit another car with no one in it. The driver responsible should make reasonable attempts to find the owner. If the owner can’t be found, then the driver must leave identifying information on the vehicle – a note with contact information will do – and then notify the closest police department.

Florida has some hefty penalties for hit-and-run drivers.

In Florida, one quarter of car accidents involve hit and runs, which prompted a change to laws in 2012 that enacted stricter punishments and fines. Now drivers can expect to see penalties such as the below if they leave the scene of a car crash they were involved in.

Why would a driver leave the scene?

There are many reasons why someone would flee the scene of a crime and run the risk of such heavy penalties.

The driver might have had a suspended license (or not had one at all). He might have had outstanding arrest warrants, or things he did not want authorities finding in his car. The car might not have been his to begin with; it might have been a company car, and his boss would not have been pleased to find it involved in an accident. Maybe he didn’t have insurance and worried he couldn’t pay for the damage.

What should you do if you were injured in a hit and run in Florida?

First of all, do not panic.

Second of all, do not try to follow the driver.

Not only will you probably not catch him, but you will also likely be cited for speeding yourself. Instead, close your eyes and try to envision what the other driver’s car looked like. Information like that could help police officers identify a vehicle from a hit and run. Even a few numbers off a license plate can narrow down a suspect list. It will also help them to preserve the official record.

Other identifiers, like rust or a cracked window, could be helpful. The car’s make, model, color, etc., could also enable authorities to catch the driver. Think of whether there were red light cameras or shops nearby with security cameras. Anything of this nature can be of use.

Talk to a Florida lawyer who handles hit-and-run accidents

Being involved in a hit-and-run accident can be very stressful, and we want to make the legal process as smooth as possible for you. You can call or email me at my Tampa office and I will talk with you about your options.