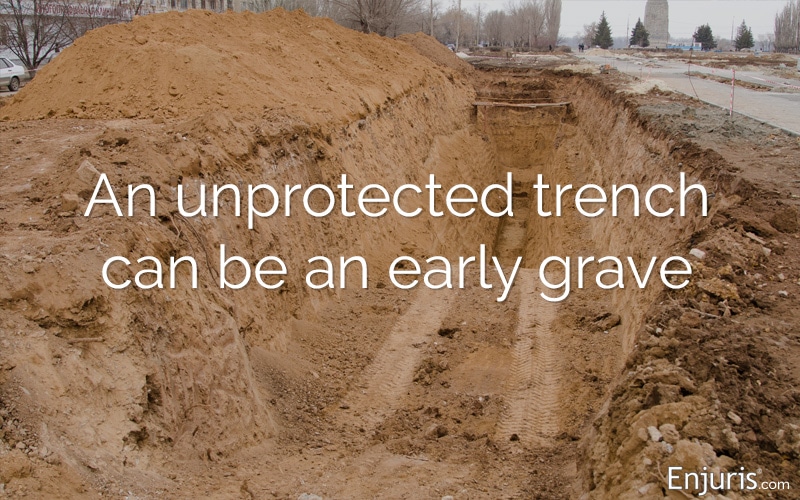 When things go wrong on a construction site, as they often do, and a worker is injured, the construction company may face civil liability.

But a recent Colorado case made clear that when things go very wrong, the owner of the construction company may also face criminal liability.

Rosario Martinez was hired by ContractOne, a general contracting construction company owned by Bryan Johnson and based in Avon, Colorado.

On June 14, 2018, Rosario was killed when a trench collapsed while he was installing a water line on a residential site in Granby.

A subsequent investigation conducted by the U.S. Department of Labor’s Occupational Safety and Health Administration (OSHA) found that Rosario was hired by ContractOne to install drywall and do carpentry work, but the company used him to do trench work even though he was not trained to do trench work.

“Trenching is one of the most dangerous activities in the construction industry and Bryan Johnson failed to take any affirmative steps to protect employees, despite repeated warnings that work activities at the job site were hazardous,” said OSHA Regional Administrator Nancy Hauter.

Rosario’s son, who was also working on-site, assisted firefighters in digging his father’s body out of the trench.

On July 15, 2021, the Grand County Court sentenced Bryan Johnson to 10 months in jail for 2 counts of reckless endangerment and 1 count of third-degree assault. Bryan pleaded guilty to the charges on June 16, 2021.

The court also ordered Bryan to:

The dangers of trench collapse

Trenching and excavation hazards result in approximately 54 fatalities every year in the U.S., according to the Centers for Disease Control and Prevention (CDC).

Despite the fact that OSHA standards are mandatory for most employers, OSHA cites numerous contractors for infractions every month. One of the most common citations is for the lack of a proper trench protective system.

The lack of a trench protective system was partially responsible for Rosario’s death, but he’s far from the only victim.

Real Life Example: In 2019, 2 Colorado workers were killed when a trench they were working in collapsed. A subsequent OSHA investigation found that the Colorado construction company, Backhoe Excavating, was aware that water was accumulating in the trench but still failed to put a trench protective system in place. OSHA issued 5 citations and a $31,446 fine against Backhoe Excavating.

Liability after a trench collapse

If a worker is killed in a trench accident, their family members may be able to receive workers’ compensation death benefits or recover damages by filing a wrongful death lawsuit.

Although less common, state and local prosecutors may also choose to prosecute employers under state criminal statutes when workers are injured or killed. The prosecution of employers within the community in which they live and work is believed to have a strong deterrent effect among other construction companies in the area. However, it’s important to keep in mind that, even if a prosecutor goes after your employer, you’ll still need to pursue civil remedies if you want to recover damages.

If you’ve been injured in a trench collapse, your best option is to contact an experienced personal injury lawyer to discuss your legal options as soon as possible.

When you’re up against a corporation or insurance company with a workers’ compensation claim, insurance dispute or personal injury matter, you can be confident in the Colorado accident attorney representing you at The Babcock Law Firm. We’re well versed in the tactics big companies use to try to prevent you from receiving the settlement or benefits you deserve, and we are fully committed to helping people just like you fight and win cases. View our profile and visit our website today.