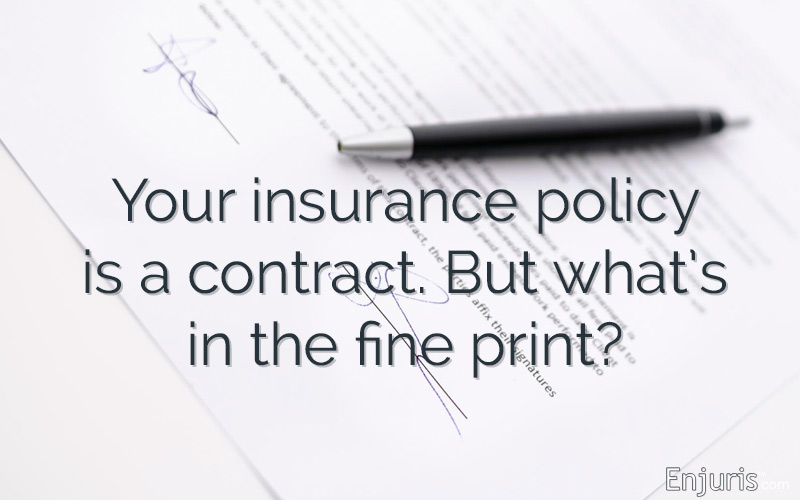 What is “bad faith,” exactly? How do you prove it, and how do you file a lawsuit? Top questions, answered by experts.

Most people are paying an insurance company for some kind of coverage almost their entire lives—medical, homeowners, or automotive. If you're a business owner or have some other specialized skill or property, you might need to carry more insurance coverage than the average person.

In some circumstances, insurance coverage isn't optional. Your mortgage holder likely requires homeowners insurance on your house. You're also required in most states to have car insurance in order to keep your vehicle registered. Other than the premium being yet another bill to pay, you probably don't think much about it unless you need to use your coverage.

Your policy is a contract between you and the insurance company, which says that in exchange for your paying the premium, it will pay to cover your losses as set forth in the policy.

But sometimes it doesn't work as smoothly as it should, and even insurance companies can fail to hold up their end of the agreement. If that happens, you might need to file a lawsuit for insurance bad faith.

Here are FAQs about insurance bad faith—including what it is, how to file a claim, and what to do next.

There's not a specific definition of bad faith, but it's typically when the insurance company is unreasonable or unfair to its policyholders.

Your insurance company is required to provide your legal defense in this scenario — that's part of what you've been paying for as part of your policy. If the insurance company refuses to defend you, it could be acting in bad faith.

Be aware that there are some actions that aren't covered in your policy.

For instance, in many states and situations, the insurer isn't required to cover you if you intentionally put yourself in a position to cause an accident. The most frequent occurrence is if you were driving while under the influence (DUI) of drugs or alcohol.

3. What do I do if my insurance company is acting in bad faith?

Before you file a claim for bad faith, you must demonstrate that you've done everything possible to work with the insurance company before resorting to a lawsuit. Keep records of conversations, emails, and other correspondence so that there's proof that you made a good faith effort to come to an agreement.

Here are a few steps to take before you file a claim for bad faith:

Step 1: Review your insurance contract. This is one reason why it's important to keep your personal documents in order. You need to see whether what you want covered is actually provided for under the contract. Read the fine print, because there could be exemptions or exceptions that you weren't aware of. If you no longer have a copy of your contract, the insurance company should be able to provide it. There might also be a digital copy in your account that's accessible online.

Step 2: Maintain a paper trail. In other words, keep a log of all of your correspondence with the insurer following a claim. From your first call to the insurer to report a loss, keep records of who you spoke with, the date, and the nature of the discussion. Also keep records of any documents you sent to the insurance company, including photos, receipts, estimates, or other evidence.

Step 3: Appeal the denial of your claim. If you received notice that your claim was denied, you can request that it be reviewed by a supervisor. The insurance adjuster follows a strict set of rules and procedures when making a settlement offer or denial. You might need to push a little to be heard — sometimes it takes a few levels of review in order to reach satisfaction.

Step 4: Write a demand letter. A demand letter puts your insurance company on notice that you're not going to accept the denial (or the settlement offer if you think it's too low) of your claim and that you'll pursue legal action if it continues to deny your claim in bad faith.

Enjuris tip: See how to write a strong demand letter.

If you've followed this process and still don't receive adequate resolution, you can initiate a bad faith lawsuit.

4. How do I file an insurance bad faith lawsuit?

Your lawyer will advise you on whether your case should be filed in federal or state court. This might depend on where the insurance company is incorporated and whether it has enough of a “link” to the state where you live for you both to be considered residents of the state.

You might be filing a lawsuit for “bad faith” but the elements involved will likely be fraud, breach of contract, negligence, or others. Your lawyer will evaluate your claim and determine which causes of action are appropriate for your case.

In a case of insurance bad faith, even if the insurer eventually settles your claim, you might still have a valid lawsuit. Tweet this

5. What damages can be recovered in an insurance bad faith lawsuit?

A plaintiff in an insurance bad faith lawsuit can recover compensation for:

In most personal injury lawsuits, damages are calculated based on the amount of the plaintiff's actual losses. This could be economic damages like medical treatments, the cost of replacing lost property, or the amount of money at issue in a contract dispute.

It can also include non-economic damages like pain and suffering or emotional distress.

There are some instances when a court will award punitive damages. Punitive damages are meant to punish a defendant, rather than compensate a plaintiff for their losses. This is only a remedy where the defendant's conduct is determined to be especially outrageous, grossly negligent, intended to cause harm, or otherwise reckless or extreme. Generally, there's a high standard for when a plaintiff can recover punitive damages.

Bad faith lawsuits are one instance when the courts will look at more than just the amount of the plaintiff's losses. The court will take into consideration the wealth of the insurance company (in other words, corporate “deep pockets”) to adequately punish for its wrongdoing. Punitive damages are also intended to serve as a deterrent to the company (and others like it) so that they won't engage in bad faith in the future.

6. When is the insurance company allowed to deny a claim?

Not every denial of a claim is bad faith.

An insurance company can deny a claim when:

You and the insurance company might disagree on what your claim is worth, but the insurer giving you a lowball settlement offer might not necessarily mean it's acting in bad faith.

If you're able to demonstrate that the value of your car is significantly higher than what the insurance company is offering, or if there are other injury costs that it's refusing to pay, it might be acting in bad faith.

If you're unsure if what you're facing is bad faith insurance, or if something just doesn't seem right in your negotiations, contact a personal injury lawyer immediately. Your lawyer will read every word of your contract and determine whether they believe your insurance company is acting in bad faith.

Even if your lawyer doesn't think the insurance company is acting in bad faith, there might be other reasons why a personal injury lawsuit is necessary to get the compensation you need to recover from an accident.

Our free Personal Injury Law Firm Directory can guide you to an attorney specializing in insurance bad faith in your state.