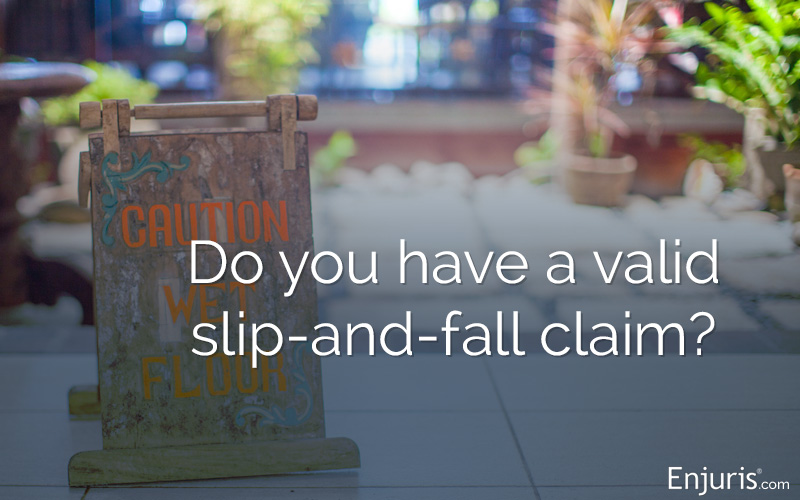 A quick quiz: What is the leading cause of injury-related deaths among people over the age of 65?

The answer is: none of the above.

Every year, more than 8 million people of all ages are treated in emergency rooms for serious injuries caused by slip-and-fall accidents.

In Alabama, you may be able to recover damages from a property owner or occupant after a slip-and-fall.

In the legal world, the term “slip-and-fall” refers to a personal injury case in which an individual is injured on someone else’s property as a result of a slip (or trip) and fall. These cases fall under the broader category of cases known as premises liability cases.

Slip-and-fall accidents can occur anywhere, but most often occur at the following places:

According to UC San Diego Health, there are 3 forces at work in a slip-and-fall case:

There are all sorts of factors that contribute to slip-and-fall accidents. Some common factors include:

If you’re injured in a slip-and-fall accident on someone else’s property, you may be able to hold the owner or occupant of the property liable.

To establish liability in Alabama, you typically need to prove the 3 elements of negligence:

The specific duty owed by a property owner or occupant depends on your legal status at the time of your slip-and-fall. Consider the following chart:

Mrs. Terrell slipped and fell on some tracked-in rainwater while shopping at Warehouse Groceries. She sued the grocery store for her injuries.

The court acknowledged that Mrs. Terrell was an invitee and the store had a duty to use “reasonable care and diligence” to keep the premises in a safe condition.

However, in ruling in favor of Warehouse Groceries, the court explained that “where the foreign substance is rainwater tracked in by customers and in the absence of unusual accumulations, due care doesn’t require that a storekeeper keep the floor completely free of water.”

The court reasoned that “to require a storekeeper to keep a floor completely dry during a rainstorm or to hold him responsible for every slick place due to tracked-in rainwater would impose an unreasonable standard of care and would, in effect, make him an insurer of the customer's safety.”

Evidence presented at the trial showed there were no large puddles or unusual accumulations of water on the floor. What’s more, Warehouse Groceries had mats inside and outside the entrance as well as an awning over the entrance to reduce the amount of rainwater being tracked into the store.

What happens when you slip and fall at work?

If you’re injured as a result of a slip-and-fall accident at work, you can generally file a workers’ compensation claim.

Workers’ compensation is a form of insurance that provides financial benefits to employees who are injured on the job. Unlike a personal injury lawsuit, the employee doesn’t need to prove that someone was at fault for the accident in order to receive benefits. Rather, the employee simply needs to prove that the injury occurred while they were completing a work-related task.

Facing factsAccording to the National Floor Safety Institute (NFSI), slip-and-falls are the leading cause of workers’ compensation claims among people 55 and older.

What if you’re partially at fault for your accident?

Alabama has one of the strictest shared fault rules in the country.

Under Alabama’s pure contributory negligence rule, an injured party is barred from recovering ANY DAMAGES if they’re even 1 percent at fault for their accident.

George enters a Winn-Dixie in Bessemer, Alabama. He’s looking for ground beef, and he’s in a hurry. He starts running down the pasta aisle to reach the meat counter at the back of the store.

While running down the pasta aisle, George slips on a spilled can of pasta sauce. He injures his back and sues Winn-Dixie for $100,000.

Security footage presented at trial shows that the spilled pasta had been on the ground for 6 hours before George entered the store.

Under Alabama’s pure contributory negligence rule, George is prohibited from recovering any damages from Winn-Dixie.

Slip-and-fall injuries range from minor bumps and bruises to traumatic brain injuries and even death.

Fortunately, slip-and-fall victims can recover 3 types of damages in Alabama:

Facing factsAccording to the Centers for Disease Control and Prevention (CDC), approximately $50 billion is spent on medical costs related to non-fatal fall injuries and $754 million is spent on fatal falls among adults age 65 and older.

Most homeowner’s insurance liability policies will cover slip-and-fall accidents that are the result of a homeowner’s negligence.

Common slip-and-fall accidents that occur in and around residential homes include:

If you slip and fall at someone’s home, you should ask the homeowner for the name of their insurer and report the claim as soon as possible. If you suffered a serious injury, we strongly recommend meeting with an Alabama slip-and-fall lawyer before accepting any settlement offers from the insurer.

Slip-and-fall statute of limitations in Alabama

Alabama has a 2-year statute of limitations for most slip-and-fall claims. In other words, you have 2 years from the date of your fall to file a lawsuit.

If you fail to file a lawsuit within the statute of limitations, you will (with very few exceptions) be forever barred from filing a lawsuit based on the accident.

There are some exceptions to the 2-year deadline. For this reason, it’s important you consult with a personal injury attorney as soon as possible to protect your legal rights.

To meet with an Alabama personal injury attorney near you, visit our free online directory.