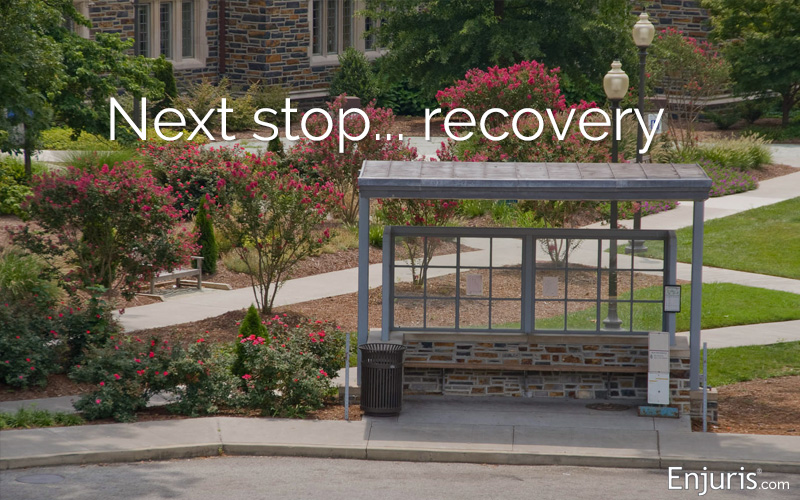 There are roughly 66,000 bus accidents every year in the United States, according to the Federal Motor Carrier Safety Administration (FMCSA). While that might sound like a lot, it’s actually only a small fraction of total crashes. To put this number in perspective, there are more than 6 million car accidents every year.

Of course, the fact that bus accidents are less common than car accidents serves as little consolation for those who are injured in a bus crash—or if you’ve lost a loved one in a fatal bus wreck.

In this article, we do our best to clear up any confusion and ease any anxiety you may have following a bus accident in Alabama.

The term “bus” refers to large private and public vehicles that transport passengers for a fee. In Alabama, this includes:

Buses crash for many of the same reasons as other motor vehicles accidents. For example, common causes of bus accidents include:

In addition, there are several factors that are more common in bus crashes than other motor vehicle crashes, such as:

Bus drivers are typically experienced, heavily screened, and aware that a single mistake could cost them their job. As a result, it’s uncommon (although certainly not impossible) for a bus accident to be caused by a bus driver’s reckless actions.

You’re about 10 times more likely to be injured in a car crash than a bus accident, according to a report issued by the American Public Transportation Association (APTA).

Despite often not having seat belts, buses are generally safer than cars because:

Although it’s statistically quite safe to be a passenger on a bus, injuries and even fatalities can (and do) occur. The most common serious injuries caused by bus accidents include:

A bus carrying children from the Tallapoosa County Girls Ranch, a ranch that provides a home for abused children, was involved in an 18-car pileup on Interstate 65 in Butler County, Alabama.

The accident, which occurred as Tropical Storm Claudette swept through the state in June 2021, is believed to have been caused when the bus hydroplaned and became sandwiched between 2 tractor-trailers.

Eight children riding the bus, ranging in age from 4 to 17, were killed.

The only person on the bus who survived the crash was the ranch director, who had been driving. The director lost 2 of her own children in the crash and she was taken to the hospital in serious but stable condition.

Additionally, a 29-year-old father and his 9-month old daughter were killed while riding in another vehicle involved in the crash.

In most cases, to recover damages after a bus accident, you need to prove that someone else was at fault for the accident.

How you establish fault depends on the nature of the accident. Most bus accidents fall into 1 of 4 categories:

1. Bus accidents caused by other drivers

The majority of bus accidents are caused by other drivers on the road.

If you’re a passenger injured in a bus accident caused by another driver on the road, you need to prove that the other driver was negligent in order to recover damages. To do this, you must establish 3 things:

Real Life Example:On November 20, 2006, a school bus carrying 40 students from Lee High School in Huntsville, Alabama was traveling on I-565. A Toyota Celica attempted to overtake the bus but lost control and struck the right front tire of the bus. In an attempt to avoid a serious collision, the bus driver swerved to the right and nose-dived 30 feet off the I-565 overpass.

Four students were killed and 24 were injured.

A report published by the National Transportation Safety Board (NTSB) determined that the driver of the Toyota Celica caused the accident when they lost control while attempting a dangerous passing maneuver around a curve.

The families of the 4 students killed in the accident filed lawsuits against the bus company, the bus driver, and the driver of the Toyota Celica. The lawsuits were settled in 2008.

If you’re injured in a bus accident caused by a bus driver, you’ll need to establish that the bus driver was negligent in order to recover damages.

Whereas most drivers have a duty to exercise “reasonable care” to avoid harming others on the road, bus drivers must exercise extraordinary care.

An injured passenger can file an insurance claim against the bus driver’s insurance company or file a personal injury lawsuit against the bus company. Bus companies are typically liable for the actions of their employees under the doctrine of respondeat superior.

Buses in Alabama are typically equipped to carry between 40 and 80 people. In rare instances, 1 or more of these passengers may cause a bus accident. For example, 2 passengers may get into a fight that spills to the front of the bus and interferes with the driver’s ability to drive the bus.

Similarly, you may sustain an injury on a bus caused by a passenger. For example, a passenger may carelessly leave their belongings in the aisle for you to trip over.

If a passenger causes your injury, you can sue the passenger for negligence. What’s more, you may be able to sue the bus driver.

Remember, bus drivers are common carriers, which means they have a duty to exercise extraordinary care to prevent harm to their passengers. Some courts have ruled that this includes making a reasonable effort to protect passengers from assaults by fellow passengers so long as the bus driver knew or should have known of the potential assault.

If a bus accident is caused by a defect, the manufacturer of the defective product can be held liable. This type of lawsuit is called a product liability lawsuit.

In Alabama, product liability lawsuits are based on either negligence or strict liability.

A bus driver who is injured on the job can typically file a workers’ compensation claim.

However, if a third party (someone other than your employer or colleague) caused your accident, you can sue them for any damages not covered by your workers’ compensation claim. For example, you might be able to sue the at-fault driver.

How long do I have to file a bus accident claim in Alabama?

The statute of limitations for most personal injury claims in Alabama is 2 years.

In other words, you have 2 years from the date of the accident to file a personal injury lawsuit or your claim is forever barred.

There are a few exceptions to the 2-year statute of limitations, so it’s a good idea to talk to a personal injury attorney as soon as possible after a bus accident in order to protect your legal rights.

Here are 5 things you can do to increase your chances of recovering the damages you deserve:

Enjuris tip:Keep track of the expenses caused by your accident, as well as the day-to-day impact of your injuries on your life, by downloading these free forms:

Ready to take the necessary steps to recover the damages you deserve following an Alabama bus accident? Reach out to an Alabama personal injury attorney using our free online lawyer directory today.