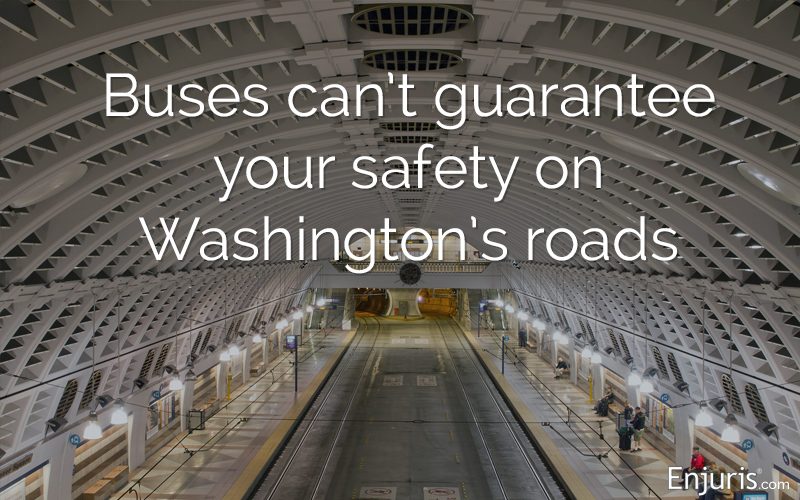 Whether it’s the King County Metro line in Seattle or the intercity lines that connect rural communities around Washington to urban centers, millions of Washingtonians depend on public and private buses to get around the state.

Fortunately, traveling by bus is 10 times safer per mile than traveling by automobile, according to the American Public Transportation Association.

But just because bus travel is safer than car travel, doesn’t mean it’s impossible to get into a serious accident in the Evergreen State.

In this article, we’ll take a look at the legal issues surrounding Washington bus accidents, including who may be liable for a bus crash and what damages you may be able to recover.

Types of buses in Washington

The term “bus” refers to large public and private vehicles that transport passengers for a fee. In Washington, this includes:

Facing factsMany Washingtonians recognize the benefits of taking public transportation. According to the Washington State Department of Transportation (WSDOT), public buses made 239.8 million passenger trips in 2019.

Additionally, there are some other factors that contribute to bus accidents more than car accidents. For example:

Facing factsAn analysis of almost 10,000 bus accidents conducted by the Federal Transit Administration found that the overall number of crashes was highest in winter months, older buses were overrepresented in injury and fatal crashes compared to newer buses, and neither bus driver age nor gender was related to accident involvement.

The average city bus weighs 32,000 pounds and is just under 40 feet long, 9 feet wide, and 10 feet high. Although the large size helps keep passengers safe, there are a couple of bus-specific features that put passengers at risk:

The crash occurred when the driver, Elmer Schuman of Pasco, changed from the right lane into the left lane on Interstate 90. The bus forced a Hyundai Elantra off the road, where it overturned and came to a stop. The bus then veered back into the right lane, striking a disabled pickup truck, which caused the bus to roll over.

The truck’s driver, Jeffrey Irmer of Spokane, was standing outside the truck when the bus slammed into it. The accident broke Irmer’s leg and he was flown to Harborview Medical Center in Seattle.

Who’s liable (at fault) for a bus accident in Washington?

To receive compensation following a Washington bus accident, you must identify the person or entity responsible for the accident.

Determining who’s liable for a bus accident and how liability is established depends on the nature of the accident. Most bus accidents fall into 1 of 3 situations:

Let’s take a look at who to sue and how to establish fault in each situation:

Bus accidents caused by other drivers

A majority of bus accidents are caused by other drivers on the road.

To establish liability in these cases, you need to prove that the other driver was negligent. To do this, you must establish 3 things:

In Washington, bus drivers are considered “common carriers.” Common carriers are held to an extremely high standard of care. Whereas most drivers have a duty to exercise reasonable care to avoid harming others, bus drivers must exercise extraordinary care.

To establish liability against a bus driver, an injured passenger still has to prove the elements of negligence. However, the heightened duty makes this task a little easier.

An injured passenger can file an insurance claim against the bus driver’s insurance company or file a personal injury lawsuit against the bus company. Bus companies are liable for the actions of their employees under the doctrine of respondeat superior.

“I look out through the windshield and I see our headlights illuminating the snow,” said band member Alexia Brown. “We’re moving at a 45-degree angle towards the fence. We’re just sliding towards it.”

The bus was carrying 56 people, including members of the marching band and staff. A total of 47 people were taken to the hospital for non-life-threatening injuries.

The driver of the bus, Nancy Aguilar, was cited for driving too fast for the snowy conditions.

A lawsuit, which is still pending, was filed against the bus driver and the bus company.

If a bus accident is caused by a defect (for example, a defective tire), the manufacturer of the defective product can be held liable. This type of lawsuit is called a product liability lawsuit.

In Washington, product liability lawsuits are based on negligence or strict liability.

What happens if a bus driver is injured in an accident?

A bus driver who is injured on the job can file a workers’ compensation claim.

Most buses are owned or operated by government entities, such as school districts and public transportation departments. This means that if you’re injured in a bus accident, you may be filing a lawsuit against the government.

For starters, before filing the lawsuit, you must file a notice of claim with the government. The notice must include several pieces of information, including a brief description of the accident and the amount of damages sought. The claim must be filed within 3 years of the accident.

Enjuris tip:The failure to file a notice of claim 60 days before filing your lawsuit against the government may result in your lawsuit being thrown out.

Although most states allow punitive damages to be awarded for the purpose of punishing defendants for malicious, intentional, or reckless conduct, Washington, with few exceptions, does NOT allow plaintiffs in personal injury cases to recover punitive damages.

An experienced Washington personal injury attorney can handle insurance companies, government agencies, and other parties that may suddenly become a part of your life following a bus accident, as well as build your case and help you obtain the damages you deserve.

To find an experienced Washington personal injury attorney near you, use our free online directory.