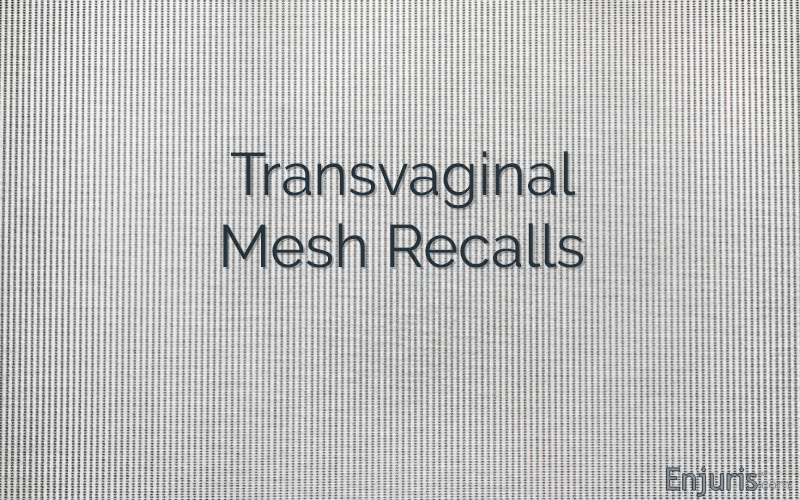 Vaginal mesh withdrawals, corrections and lawsuits - what you can do

Transvaginal mesh recalls are uncommon and always cause for concern.

The FDA (abbreviated from U.S. Food & Drug Administration) is a branch of the federal government that oversees regulation and safety concerns for prescription medications, medical devices, over-the-counter drugs, cosmetics and particular food items. Many individuals have been implanted with devices that were later recalled; some had no problems at all, while others required revision surgery to rectify the problem. (Learn more on how the FDA recalls medical devices.)

Enjuris tip: More than 100,000 women are suing surgically implanted gynecological mesh manufacturers like Boston Scientific in what is believed to be the largest multi-district litigation since asbestos. CBS News recently covered the story in a 60 Minutes special. See the interview with leading plastic expert Duane Priddy on the use of polypropylene in the human body.

Where does the FDA stand on vaginal mesh recalls?

The FDA places medical devices in one of three regulatory classes. The device must meet the FDA regulations for that class.

At first, transvaginal mesh was a Class 2 medical device, meaning that if it was "exempt," it did not need to go through premarket approval with the FDA to determine safety and efficacy.

However, in January 2016, the FDA strengthened its position in regard to this product. They issued a public safety announcement that had two final orders:

1) Transvaginal mesh would be reclassified to Class 3, which is the most stringent of all labels and is for medical devices that pose a high risk to health and safety; and

2) The products would need premarket approval prior to mass distribution.

The FDA took a while to get to this point. They issued public safety notifications in 2008 and 2011, but there were still significant numbers of patients experiencing post-surgical problems with their vaginal mesh. As such, they convened an advisory panel in 2011 and issued an order in 2012 that would make manufacturers conduct postmarket surveillance on their products.

Many manufacturers did whatever they could to avoid conducting this postmarket surveillance, including changing labeling, pulling it from the market or even claiming that the device was not, in fact, transvaginal mesh.

Enjuris tip: Just because your specific implant is the subject of a voluntary recall (or even an FDA recall) doesn't mean it must be removed.

However, they will not do more without additional research.

As Dr. William Maisel, deputy director of science and chief scientist for the FDA's Center for Devices and Radiological Health, says, "These stronger clinical requirements will help to address the significant risks associated with surgical mesh for repair of pelvic organ prolapse. We intend to continue monitoring how women with the device are faring months and years after surgery through continued postmarket surveillance measures."

Has the FDA ever recalled a transvaginal mesh device?

Technically, the FDA has never recalled a transvaginal mesh device.

There have been plenty of voluntary withdrawals on the part of manufacturers, and there have been market corrections. However, the federal government never took it upon themselves to recall a device. Below you can see what they did do.

Just because other people have had transvaginal mesh lawsuits and issues does not necessarily mean that you will, too. You should be concerned when your doctor informs you of a recall based on what he or she has learned from the FDA, and that the device must be removed immediately. Otherwise, wait until you start experiencing physical symptoms (if you ever do).

As noted, the FDA has only said that transvaginal mesh can cause serious health complications and that these complications are "not rare." However, they have not issued any recalls. Their stance is that, with enough clinical data from postmarket surveillance, they will be able to adjust existing products so that they are safer and more effective.

There have been plenty of voluntary recalls or product withdrawals by device manufacturers, though, most likely because of the numerous vaginal mesh lawsuits.

What does this mean for patients, especially those who already have a transvaginal mesh implant inside them?

Keep in mind that just because you have an implant that has been recalled does not mean it must be removed, even if the FDA or a manufacturer says there have been problems with that product. Those problems could be as small as a misprinted label or as large as the device breaking down.

Approximately 100,000 vaginal mesh lawsuits are pending before Judge Joseph Goodwin in West Virginia, though many have settled, gone to trial or have been dismissed.

The form of these cases looks like a class-action lawsuit, but they are actually called "multidistrict litigation," or MDLs.

There are a few key differences between the types of cases, such as MDLs only being consolidated for pretrial proceedings and discovery before being returned to the court in which it was originally filed. Then, your case can be viewed with the evidence and rulings provided by the MDL judge and completed in your original jurisdiction where you first filed.

There are thousands of pending lawsuits for transvaginal mesh – can you join one?
Tweet this

MDLs are only filed in federal court. The Judicial Panel on Multidistrict Litigation, or the JPML (seven federal judges who oversee all MDLs), can decide whether to bunch your individual case with hundreds or even thousands of similar cases that share a common question of fact.

This means you will hopefully avoid the duplicative presentation of evidence and streamline your case in the court system, since there are so many cases like yours. The JPML's idea is, why present the same case thousands of times if you only need to do it once?

How to start or join a transvaginal mesh lawsuit

If you think you have a case against a transvaginal mesh manufacturer, it is important to consider the following:

Yes, yes, and yes. Products liability lawsuits (also known as defective products) require expert testimony, lots of depositions and mountains of evidence. The manufacturer, meanwhile, has gobs of money at its disposal, with which they can throw up any number of roadblocks. An attorney with experience in this area knows how to play the game.

How can I join a vaginal mesh lawsuit?

There are two ways: either your lawyer files a motion to transfer your case into an existing MDL, which would save money on pretrial aspects of the case; or the JPML can order you to transfer into an MDL if there are common questions of fact.

What does joining a lawsuit really mean?

Put bluntly, you will be talking about your vagina to anyone who asks about it. It will likely take a few years to finish the case, and before then you will be deposed (put under oath and asked questions by opposing counsel about your health complications). If the case goes to trial, you might have to testify. Joining a lawsuit means having endless patience and understanding that you might have to discuss your private problems in open court. At the very least you will undergo independent medical examinations, which are doctors' appointments with a medical professional chosen by the defendant.

Do I have to pay to join a case?

If any lawyer asks for a retainer for a personal injury case, RUN. Lawyers should take a third of the proceeds, plus costs (filing, copying, etc.). That can increase if you go to trial (a normal number is 40% in that instance).

What can I expect to receive as compensation?

All legal fee agreements generally have a line that says "Past performance does not indicate future rewards." This means that even a rainmaker can't promise you anything. All an attorney can do is provide a range, telling you which clients got A and how many got B. Some cases go to trial and a jury awards damages; others settle prior to a verdict. Those settlements have reached $20 million for a single plaintiff, like the one against Ethicon. However, other plaintiffs have had their cases tossed out for lack of evidence. All of this means that nobody can predict anything and those who do are lying.

How will joining a lawsuit impact my doctor?

While you might feel that filing a case is a betrayal to your doctor, at the end of the day you have to take care of yourself. You need to do what's right for your body, and a good surgeon will support you in that decision (since really, it wasn't his fault; it's the device itself). The surgeon will almost certainly be called as a witness. If he is experienced, he will have played the game before.

How to hire a transvaginal mesh lawyer

If you are experiencing pain at your implant site or you hear that your implant was the subject of a transvaginal mesh recall, the first thing you do should be to speak with your surgeon. It is most important to address any immediate problems before going further.

Enjuris tip: If your surgeon says you are a candidate for mesh surgery, ask 1) how many times they've done the surgery, 2) how many patients had complications, 3) whether they have successfully removed mesh, and if so, 4) how many times?

Once you are physically under control, then get a lawyer. Many women feel more comfortable with a female attorney, as these cases involve intimate areas.

You can also start with a Google search along the lines of "Florida defective products vaginal mesh attorney," where you substitute Florida for your state. You can also get a specific as your city, such as "Tampa products liability vaginal mesh lawyer." This will help to narrow down your results, since just Googling "mesh implant attorney" will result in too many results to parse through.

How do you know if an attorney is up to snuff? Read online reviews to pick the best lawyers. Then, once you have about five options, speak with them in person. You can interview each one and decide if he or she is equipped for your needs. Only by talking in person will you be able to determine the best of the bunch.

Also, remember that each state has a statute of limitations (the time window in which you can file your case). Once that time has passed, you are barred from filing. A few states only offer one year for cases, so if you have to, get any attorney to file your paperwork and then choose a new lawyer for the more complicated aspects of the case.

Products liability law is specialized and difficult. You need a lawyer who has years of experience and knows how to work with pending multidistrict litigation cases. If you have not met with an attorney yet, try the Enjuris directory for someone in your state who can hold your hand along the way.