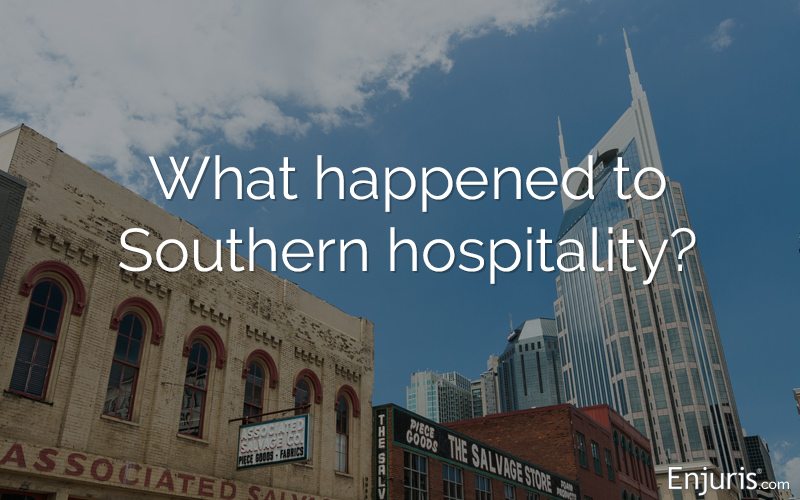 Leaving the scene of a crash results in a hit-and-run charge in Tennessee. Penalties range from Class C misdemeanor for minor property damage to a Class A misdemeanor, including jail time, fines and license suspension if a person is injured. This could include up to 11 months, 29 days in jail and a fine up to $2,500. If the victim dies, the charge could be upgraded to vehicular manslaughter, with a sentence of up to eight to 30 years in prison.

Tennessee law requires a driver to seek out the owner of the other vehicle or property if they’re not already available. If you can’t locate the owner, you must leave a note with information about the accident, how to contact you, and your driver’s license number.

A hit and run is an accident where the driver knowingly leaves the scene without providing contact information to the victim.

A hit and run is any crash — from minor to serious — whether it involves a car in motion or a parked vehicle.

The premise of personal injury law is that everyone has a duty to another person. Yes, you can have a duty to someone you don’t even know, and this duty changes from minute to minute depending on what’s going on around you and what activities you’re doing.

A pedestrian has a duty to look where they’re going in order to avoid causing injury to other pedestrians or people using the sidewalks or roads, and a driver has a duty to all other road users. That means following rules and laws, maintaining reasonable speed, properly signaling, and driving in a way that’s not dangerous or reckless.

But there’s another duty, too, which is the duty to stop.

Tennessee requirement to stop after a car accident

If you’ve caused an accident, you’re required to:

If someone was injured, you must provide reasonable assistance until first responders arrive.

There are 2 sides to a hit and run claim: The victim (injured person) and the driver who left the scene.

Does insurance cover a hit and run?

A driver who is more than 50% at fault cannot recover damages in a lawsuit.

Tennessee drivers, pay attention! You can only sue for a car accident if you were less than 50% at fault. Tweet this

Why would someone who wasn’t at fault flee the scene?

Every scenario is different, but there might be situations when a person doesn’t want to be connected to an accident, even if they’re not at fault.

For example, you could have a collision with someone who wasn’t at fault but:

There are plenty of reasons why a driver might not want to be included in a police report, even if they didn’t cause the accident.

Still, if you caused an accident, you need to file a police report even if the other driver isn’t available and you can’t exchange information with them directly. Filing a police report will protect you from being charged with a hit-and-run violation.

Uninsured motorist coverage doesn’t apply to vehicle damage but would cover expenses associated with your injuries if the driver who hit you can’t be identified or located.

4 steps to take after a hit and run accident

Never try to pursue a hit and run driver on your own. You have no idea if the person is armed, drunk, or dangerous. Make note of their appearance and identity, but don’t chase.

Law enforcement has ways of finding and identifying people. Even if they can’t figure out who it was, the accident report will be essential to your insurance claim.

Even if you don’t think you were injured, it’s important to get a medical evaluation after any accident, no matter how small (unless the hit and run involved your parked car and you weren’t inside). You can either see your primary care provider or go to a hospital or urgent care center.

Some injuries don’t show symptoms right away — conditions like whiplash, back and neck injuries, head injuries, and other conditions can take days or weeks to become noticeable. If your condition immediately after the accident isn’t documented, it will be difficult to prove that the injuries are related to the accident.

“Evidence” is any information that can be used to prove your claim. This might be witness statements, a police report, photos or video, or any other documents or details that can help demonstrate to the court how the accident happened.

The police report is important, but it’s the police’s job to document what they observe — not necessarily to determine who was liable and for what. You can take accident photos of the damage, the hit and run driver’s car, or anything else that might be relevant.

If you see the accident happen, take note of the driver’s license plate number, make and model of the vehicle, and maybe even the driver’s appearance if possible.

If there are other people present at the scene, take their names and contact information as witnesses. Also, if the hit and run happens in a parking lot or on the street involving a parked car, check with businesses nearby to see if there’s any surveillance footage that might’ve captured the accident.

What if YOU hit a parked car?

If you’re involved in any kind of Tennessee car accident, you must leave information so the owner of the damaged car or property can contact you. If you can’t identify the car’s owner immediately, you can leave a note.

Be sure to include the following:

You should also call the police to make a report.

It’s a good idea to keep some “supplies” in your car, just in case you do ever have a collision and the owner isn’t available. A waterproof marker, paper, and a plastic bag will do the trick. You can write a note and leave it under the car’s windshield wiper just so there are no questions about whether you followed your due diligence.

Are there defenses to a hit-and-run charge?

Depending on the circumstances, a criminal defense lawyer might be able to make the argument that you’re not guilty of a hit-and-run.

If the damage amount was less than $400

If the damage amount was more than $400

Class C misdemeanor: Up to 30 days in jail, $50 fine, and license suspension.

If the accident resulted in physical injury or death

Class A misdemeanor: Up to 1 year in jail, fines up to $2,500, and license suspension. If the court finds that you should’ve known the accident could result in death, you could be charged with a felony and sentenced to up to 1-6 years in prison.

When do I call a lawyer after a Tennessee hit and run accident?

If you hit another car or damaged property and you didn’t stop and provide information or file a police report, your first call should be to a criminal defense lawyer. Some people don’t intend to commit a crime, but they panic in the moment and leave the scene because they don’t know what to do. It happens. If that’s your situation, a criminal defense lawyer might be able to help you minimize charges.

If you’ve discovered that your car was hit and you don’t know by whom, or if you were hit and the driver left the scene, you can consult a personal injury lawyer. A Tennessee personal injury lawyer can work with the insurance companies, police department, and any other relevant parties to figure out how you can recover damages.

For any personal injury accident, you could recover damages to cover costs that include:

Enjuris tip: Find out how attorneys calculate the potential value of your personal injury claim.

Insurance might not be clear-cut in a hit and run accident if you’re not able to identify the driver. Even if you do identify the person, sometimes a driver leaves the scene because they don’t have insurance. If you don’t have uninsured motorist coverage on your own policy, your only recourse might be a lawsuit against the other driver. However, sometimes even that doesn’t work because it can happen that an uninsured driver also doesn’t have enough assets to cover a judgment in a lawsuit.

That’s why your lawyer’s advice will be the best tool you have to recover compensation after a Tennessee hit and run. Based on the specific facts of your case, they’ll advise you on what your legal options are and how to proceed.

You can use the Enjuris law firm directory to find a Tennessee attorney who’s skilled, experienced, and ready to take on your case.