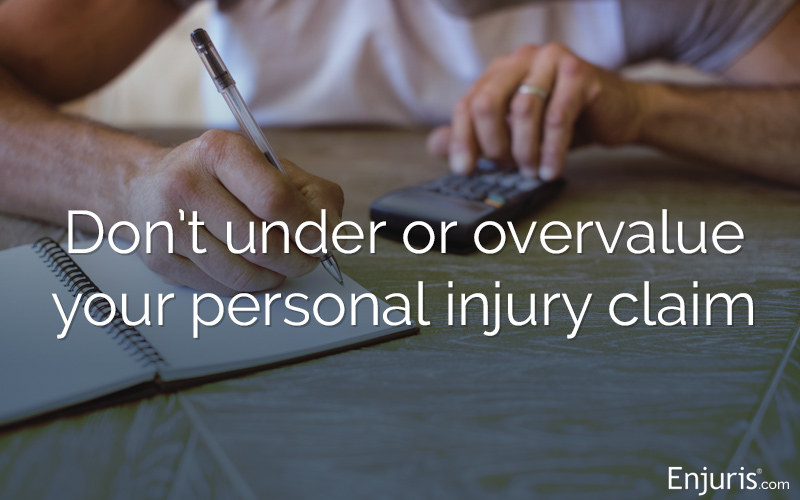 Learn how to calculate the value of your accident claim

You can estimate the value of your South Carolina personal injury claim by using the same formula attorneys and insurance companies use. Learn the formula, and find out what other factors might impact your claim value.

Nobody can tell you exactly what damages you’ll be awarded if you file a personal injury lawsuit. Nevertheless, it’s a good idea to have a general sense of the value of your claim so you can answer important questions such as:

With that in mind, let’s take a look at the formula attorneys and insurance companies use to estimate the value of a personal injury claim, as well as the major factors that can impact the value of your claim in South Carolina.

What types of damages are included in my South Carolina claim calculation?

In South Carolina, 3 types of damages must be considered when calculating the value of your claim:

Enjuris tip: Learn more about the different types of compensation available in personal injury cases, including detailed examples of each type.

The formula for calculating damages in South Carolina

Attorneys and insurance companies need a way to quickly assess the potential value of a claim. Here’s the formula they use:

Let’s look at an example so you can see how this formula works:

Dorothy was walking to the bathroom in a restaurant in Columbia, South Carolina, when she slipped on a spilled drink. Dorothy fell and sustained a serious brain injury.

As a result of her fall, Dorothy incurred $100,000 in medical expenses. What’s more, she’ll require future in-home care estimated at $500,000. Dorothy works part-time at a library making $1,000 per month. Though she planned to work for another year, she’s no longer able to work because of her injury and will miss out on $12,000.

Dorothy and her daughter meet with an attorney to discuss their case. The attorney takes out his notepad and uses the formula above to estimate the value of Dorothy’s claim. Here is what he jots down:

What about punitive damages?

Punitive damages are only available in cases where the plaintiff proves by clear and convincing evidence that their injury was the result of the defendant’s willful, wanton, or reckless conduct.

There’s no formula that South Carolina courts use to award punitive damages. However, the South Carolina Supreme Court has stated that the following factors are relevant when considering how much to award:

What factors can limit my damages in South Carolina?

When calculating your damages, keep in mind that there are 3 main factors that can significantly limit the amount of damages you receive.

Most states have damage caps that limit the amount of damages a plaintiff can receive in certain personal injury cases.

Jason is texting while driving home from a South Carolina Gamecocks basketball game. Because he’s texting, he doesn’t notice someone crossing the crosswalk until the last second. He slams on his breaks and the car behind him, driven by Mathew, rear-ends him.

Jason suffers a minor injury and sues Mathew for $10,000.

Under South Carolina’s modified comparative fault rule, Jason can only recover $6,000 (i.e., 60% of his damages).

Jennifer suffers a minor ankle injury in a bike accident caused by Adam.

Jennifer’s doctor tells her not to engage in any strenuous activity for 2 weeks. Against her doctor’s advice, Jennifer decided to participate in a bike race she had previously scheduled. During the race, she further injures her ankle and requires an extra 6 weeks of treatment.

In this example, Jennifer’s damages would be reduced due to her failure to mitigate (i.e., the cost of the additional 6 weeks of treatment would be subtracted).

What other factors can impact my claim?

One of the best ways to ensure that you receive all the damages you deserve is to keep track of the expenses associated with your injury as well as the day-to-day impact of the injury on your life.

How do I know whether to accept a settlement offer?

The first thing to keep in mind when deciding whether or not to accept a settlement offer is that it’s YOUR decision. Your attorney can provide advice, but the decision is ultimately yours.

Here are 3 factors to keep in mind when deciding whether to accept a settlement offer:

Ready to discuss the potential value of your case with an attorney? Use our free online directory to find a personal injury attorney near you.