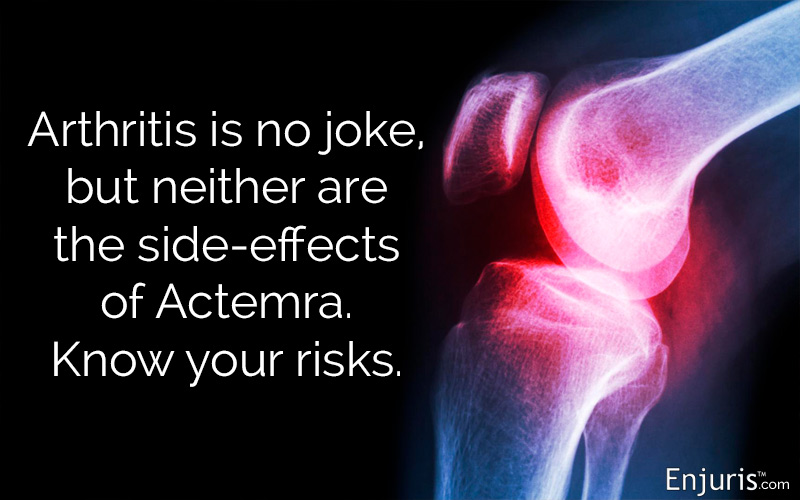 What is an autoimmune disorder?

An autoimmune disorder is when the body begins to attack itself because it treats its own tissue as a foreign substance. This leads to pain and inflammation of joint tissue. Some forms of autoimmune disorders are rarer than others, and Actemra has been shown to be an effective injectable treatment.

How do patients use Actemra?

Actemra fights inflammatory response. It's administered by IV infusion for juvenile arthritis, but adult patients with autoimmune conditions can take it at home using a pre-filled syringe. Actemra is within a category of drugs called IL-2 inhibitors (also included is Humira, Enbrel, and Remicade), and they each carry a black box warning about the risk of tuberculosis, invasive fungal infection, and other opportunistic infections.

The difference between Actemra and the other IL-2 inhibitors is that those medications include safety warnings about heart failure, lung disease, heart attack, stroke, and pancreatitis. Since Actemra doesn't include those warnings, consumers were led to believe that it was safer.

However, FDA researchers concluded that these conditions occurred just as much, or perhaps more frequently, to users of Actemra than to users of the related drugs.

There are a variety of common Actemra side-effects, some of which are immediately apparent and others that take a while to appear, including:

Actemra also reduces the body's ability to fight infection, which makes the user more susceptible to serious infections. Infections linked to Actemra include:

It also increases the likelihood of common illnesses like colds and flu. A recurring infection could require a longer and more severe course of antibiotics, which carry their own set of risks.

The FDA approved Actemra in 2010 for adults with moderate to severe RA. It was released by manufacturer Roche and subsidiary Genentech in 2010, along with advertising that Actemra was unique and could offer safer options to RA sufferers that other drugs didn't. But, a 2009 Wall Street Journal report said Actemra might have caused 15 deaths out of 5,000 people who took the drug in Japan before it went on the market in the US.

Over time, the FDA received more than half a million adverse event reports about Actemra side-effects, and research indicated it could be just as dangerous as other drugs for causing heart attacks and strokes.

As a result of these severe illnesses and fatalities linked to Actemra, lawsuits have been filed across the US for failure to warn based on a lack of information on Actemra packaging to notify patients about its most serious risks.

Failure to warn is a cause of action in personal injury lawsuits, often with respect to defective drugs. A manufacturer has a duty to inform medical providers and the public of risks related to any prescription or over-the-counter drug.

What to do if you've experienced Actemra side-effects

If you've experienced Actemra side-effects, you might be able to bring an Actemra lawsuit.

First, consult your physician to obtain the treatment you need to mitigate its effects. Second, the Enjuris online personal injury law firm directory is the ideal resource for finding a defective drug lawyer who's right for your case.

What's included in an Actemra lawsuit

If you bring a successful Actemra lawsuit, you might recover:

No one wants to be in a position where they need to file a lawsuit, but it's reassuring to know that it's an option if you've been injured. A product liability lawyer will be experienced and knowledgeable to handle a defective drug case.

First, you'll need to provide information to your lawyer about exactly what Actemra side-effects you experienced, when, and how. The lawyer will assemble a team of medical experts and other professionals to make your case.

Finding a lawyer with whom you're comfortable is similar to choosing a doctor. Enjuris offers a variety of resources including lawyer interview questions and a guide to preparing for your first meeting with your lawyer. With the right tools in hand, you're ready to recover damages for injuries sustained from Actemra side-effects.