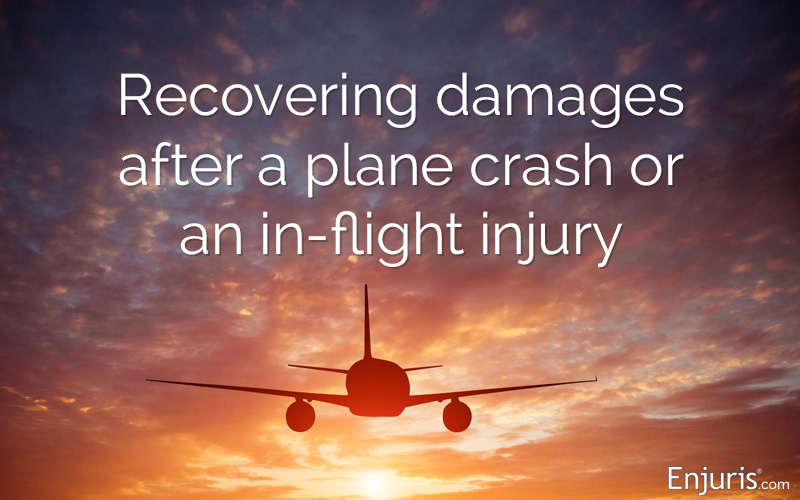 Table of Contents + show
Learn about plane crash lawsuits and programs designed to help families of plane crash victims
Why do airplanes crash?
Potential legal claims following a plane crash
Turbulence and in-flight injuries
Types of damages available after a plane crash
What is the Aviation Disaster Family Assistance Act of 1996?
Statute of limitations in Oregon
Passengers who survive plane crashes or suffer in-flight injuries may be able to sue the airline or the manufacturer of the aircraft.

As Buddy approached the Portland International Airport, he lowered the landing gear and felt an abnormal vibration. The indicator light didn’t show that the gear was lowered successfully and Buddy wasn’t sure if it was locked in place.

Buddy requested a holding pattern to diagnose the problem.

For the next hour, Buddy, his co-pilot, and the flight engineer circled the Portland International Airport trying to figure out if there was a problem with the landing gear. During this time, nobody bothered to check the plane’s fuel gauge, which showed the fuel was burning at an alarming rate.

When the crew finally realized they were out of fuel, the Douglas DC-8 lost 2 engines to flameout. Buddy instructed his co-pilot to declare a mayday.

“Portland tower, United 173, mayday. We’re—the engines are flaming out. We’re going down. We’re not going to be able to make it to the airport.”

Soon after mayday was declared, the plane crashed into a residential Portland neighborhood near East Burnside and 157th Avenue.

In all, 2 crew members and 8 passengers were killed in the crash. Many more suffered serious injuries.

Plane crashes are extremely rare. But, as the survivors of the United Airlines Flight 173 crash will tell you, they do happen. And when they do, they are often catastrophic.

Why do airplanes crash?

The National Transportation Safety Board (NTSB), which investigates the vast majority of plane crashes in the U.S., found that the most common causes of general aviation accidents include:

The most common causes of commercial aviation accidents include:

When a plane crashes, the occupants of the plane may be able to recover damages. There are 5 types of legal claims commonly filed following a plane crash:

Let’s take a closer look at each legal claim.

If your plane crash is caused by a human error, such as a pilot neglecting to monitor the fuel gauge, you may be able to file a personal injury lawsuit based on negligence.

Enjuris tip:Generally speaking, negligence is the failure to take proper care in doing something.

To prove negligence in Oregon, you must establish the following elements:

When someone is killed in a plane crash, certain members of their family (spouse, children, parents, stepchildren, and stepparents) may be able to recover damages by filing a wrongful death lawsuit.

A wrongful death lawsuit is similar to a personal injury lawsuit in the sense that the surviving family member will need to prove that the defendant was liable for the accident (just as the passenger would have had to prove had they survived).

If your wrongful death lawsuit is successful, you’ll receive compensation for the loss of your loved one.

When suing the federal government, plaintiffs must do so under the Federal Tort Claims Act (FTCA). The FTCA requires plaintiffs to follow special rules and procedures, so it’s a good idea to consult with an attorney in your area who specializes in federal cases.

The term “turbulence” simply refers to some sort of change in the air around your plane.

Things that cause turbulence include:

Pilots are often able to warn passengers when there’s going to be turbulence and even maneuver the plane to avoid really bad turbulence. However, sometimes turbulence is unexpected or unavoidable, or both.

In most cases, a passenger experiencing turbulence will feel nothing more than a small vibration. In extreme cases, however, turbulence can be enough to throw passengers around the cabin.

“More than 65% of severe injuries logged by U.S. accident investigators from 2017 through 2020 on airliners resulted from planes encountering bumpy skies, triggered by atmospheric conditions that could be worsening due to climate change.” - Bloomberg

Passengers who are injured during turbulence typically aren’t wearing a seatbelt. However, even belted passengers can be injured by falling luggage.

Facing factsA study published by the Flight Safety Foundation found that roughly 10,000 passengers were injured each year by falling luggage. These injuries ranged from bruises and lacerations to traumatic brain damage.

An injured passenger may be able to file a lawsuit against an airline for negligence if the turbulence could have been avoided or the impact limited. For example, if a pilot is aware that the plane will soon be experiencing significant turbulence but fails to instruct passengers to be seated and wear their seatbelts, the pilot may be liable if a passenger is injured.

Similarly, a passenger may be able to file a lawsuit against an airline if they were struck by luggage that was improperly secured by a flight attendant.

Types of damages available after a plane crash

Loved ones who file wrongful death lawsuits following a plane crash may recover the following damages:

What is the Aviation Disaster Family Assistance Act of 1996?

Under the Act, the National Transportation Safety Board (NTSB) must carry out a number of duties following a plane crash. For example, the NTSB must:

Statute of limitations in Oregon

The statute of limitations is the amount of time you have to file a lawsuit before your claim is permanently barred.

In Oregon, most plane crash lawsuits and in-flight injury lawsuits must be filed within 2 years of the plaintiff being injured. If the plaintiff is under the age of 18 when they’re injured, the 2-year clock won’t start ticking until they turn 18.

If your loved one was killed in an aviation accident and you wish to file a wrongful death claim, you have 3 years in which to file an action. The clock starts ticking from the moment the accident or crash occurs.