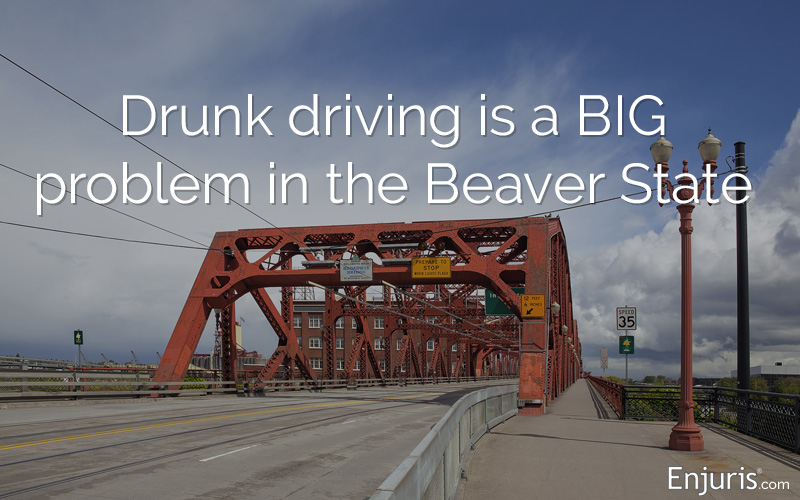 Find out what constitutes a “super DUII” in the Beaver State

Table of Contents + show
Find out what constitutes a “super DUII” in the Beaver State
Oregon drunk driving statistics
Blood alcohol concentration (BAC) limits in Oregon
Penalties for driving under the influence in Oregon
Tips to prevent drunk driving accidents
DUI-related accidents and personal injury lawsuits
Oregon’s dram shop law
Steps to take after a drunk driving accident
Someone is injured in a drunk driving crash every 2 minutes in the United States. Find out how Oregon is attempting to solve the drunk driving problem, and learn what steps you should take to recover damages if you’re involved in an accident with a drunk driver.

Roughly 30% of all fatal car accidents in Oregon are caused by intoxicated drivers, according to the National Highway Traffic Safety Administration (NHTSA). That’s nearly 1 in 3 deadly crashes.

Drunk drivers wreak havoc on the roads, but they also create all sorts of unwanted work for those in the judicial system.

The rates of fatal alcohol-related accidents have actually gone down over the years in Oregon. Nevertheless, the state still averages about 3.7 alcohol-impaired driving fatalities per 100,000 people (above the national average of 3.2).

In Oregon, you can be charged with driving under the influence of intoxicants (DUII) if you operate a vehicle with a blood alcohol concentration (BAC) of 0.08% or more.

How much is too much?

While it depends on many factors (such as your biological gender, your weight, how much you’ve eaten that day, etc.), the state of Oregon provides this helpful chart below. Cells highlighted in dark orange indicate being over the legal limit.

Operating a motor vehicle with a BAC of 0.08% or more is considered a “per se violation,” which means no further evidence of intoxication or impairment is needed to be charged with a DUII. However, drivers in Oregon can be charged with an impairment DUII even if their BAC falls under 0.08%.

To be charged with an impairment DUII, you must be “affected” by alcohol or drugs while operating a motor vehicle.

Evidence often used to support a decision that a person is affected by alcohol or drugs includes:

Do I have to agree to take a BAC or field sobriety test?

Oregon’s implied consent law requires that you submit to a sobriety test if you’re stopped by a law enforcement officer who has reasonable grounds to believe you’re driving while under the influence of alcohol or drugs.

If you refuse to submit to a test, your license will be suspended for 1-3 years and evidence of your refusal can be used against you in a criminal trial.

Notably, sobriety checkpoints are NOT allowed in Oregon.

Penalties for driving under the influence in Oregon

Most 1st time DUII convictions are misdemeanors. However, you can be charged with a felony DUII if you receive 3 convictions within a 10-year period.

On top of that, if your BAC is higher than 0.15%, you can be charged with a “super DUII” (also called a “high BAC”) which carries enhanced penalties.

Here’s a closer look at the penalties for driving while under the influence of intoxicants in Oregon:

Despite the known dangers of drunk driving, people sadly continue to drink and then get behind the wheel.

Facing factsAccording to Mothers Against Drunk Driving (MADD), 2 out of 3 people will be impacted by a drunk driving crash in their lifetime.

Being a responsible driver is simple: don’t drink and drive.

If you’re injured in a motor vehicle accident caused by an intoxicated driver, you can file an insurance claim like you would in any other car accident.

Keep in mind that in order to recover damages, you’ll need to prove that the intoxicated driver caused your accident. You can’t, for example, recover damages if YOU caused an accident and the other driver involved happened to be intoxicated.

Be sure to call the police after an accident with an intoxicated driver. The police can conduct a field sobriety test and draft a report that may help support your claim down the road.

Oregon’s dram shop law can be found in Oregon Revised Statute 471.565. The law states that an establishment may be held liable for damages caused by an intoxicated patron if the following conditions are met:

Steps to take after a drunk driving accident

Once you have taken care of your immediate health concerns, call the police so they can investigate the accident and draft a police report. Be sure to let the responding office know if you suspect the other driver is intoxicated. Your statement (and any evidence you can provide) may help the officer establish the necessary reasonable grounds to administer a field sobriety test.

In addition to calling the police, look around for witnesses and collect their contact information. Witnesses are notoriously difficult to track down days or weeks after a crash. You should also take photographs of the scene, including anything that might support your claim that the other driver was intoxicated.

Be sure to attend all of the follow up appointments with your doctor. Insurance companies and defense attorneys will look for any reason to pay you less by claiming you failed to “mitigate your damages” by not listening to your doctor or not attending medical appointments.

Finally, stay off of social media! Although it may seem harmless, social media posts about your accident or health can be used against you.

Enjuris tip:Learn more about the dangers of using social media after a car accident.

Are you ready to receive the compensation you deserve? Use our free online directory to contact an Oregon drunk driving injury attorney near you.