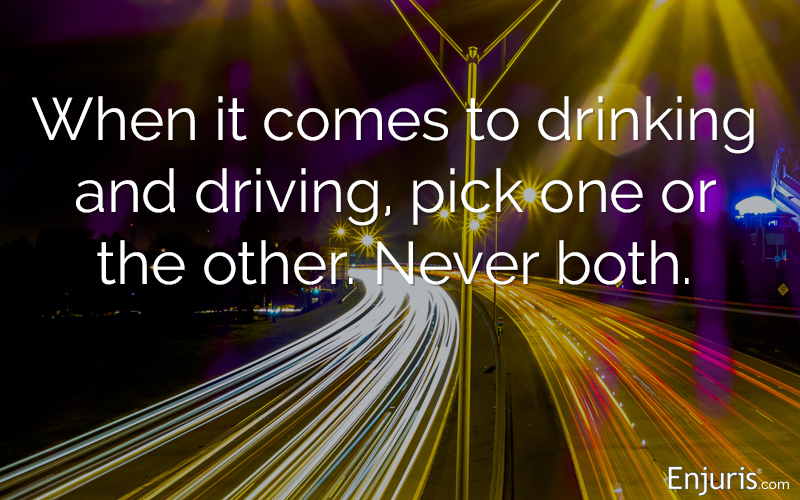 Understand the facts and your legal rights when it comes to North Carolina drunk driving accidents.

In a recent year, approximately 1 in 6 children involved in a drunk driving accident died from their injuries. On top of that, it was the child's own driver who was drunk in more than half of these fatalities.

The U.S. Department of Transportation National Highway Traffic Safety Administration (NHTSA) reports that 1 person dies about every 50 minutes in this country in a drunk driving crash — that's nearly 30 people every day. In 2018, there were 10,511 deaths from drunk driving crashes nationwide. In other words, nearly one-third (29%) of traffic fatalities in the U.S. were caused by drunk driving.

The Centers for Disease Control and Prevention (CDC) reports that 4,102 people were killed in crashes involving a drunk driver in North Carolina from 2003-2012, which is the most recent period for which data are available.

Facing factsThe rate of death in North Carolina is higher among women compared to men when it comes to drunk driving crashes. This is consistent with national data. The highest fatality rate is for the 21-34 age group.

What is drunk driving?

Drunk driving, also called impaired driving, is when a driver gets behind the wheel after consuming alcohol. The National Safety Council says that alcohol is the biggest drug problem in this country — and that there are more alcohol-related crashes than any related to cocaine, heroin, or every other illegal drug combined.

Drunk driving is so dangerous because alcohol is a sedative. Its effects can impair a driver's ability to make decisions, reduce coordination, and even restrict your ability to perform routine driving maneuvers.

When you drink and drive, you're endangering yourself, your passengers, other drivers, pedestrians, bicyclists, and anyone else who shares the road.

The legal limit for alcohol consumption is a blood alcohol concentration (BAC) of 0.08%. However, there's no “formula” or method to know your BAC because it's affected by several factors. The only ways to accurately test BAC are using a breath test (commonly called a Breathalyzer, which is usually used by law enforcement), or a urine or blood test.

Your BAC can be affected by:

Enjuris tip: You can't determine your BAC based on a chart or calculator. You also can't judge your own BAC based on your friend's BAC, or even your own BAC on a different day or at a different time. Many of the factors that affect BAC are variable (food, level of stress, medications, etc.), so the only way to guarantee that you're within the legal BAC limit is not to drink any alcohol before you drive.

There are standard drink sizes in the U.S., and you might be able to somewhat predict your BAC based on the number of drinks consumed. The CDC says 14 grams of pure alcohol is the approximate amount a 160-pound man would need to drink in an hour in order to reach the BACs listed below.

A standard drink is:

The chart below shows the number of drinks that might result in the noted BAC, the effects on your body, and how it could affect your driving.

The best prevention for drunk driving is NOT to drink and drive. Period.

Plan before you go. Have a designated driver or an alternate ride home if you plan to drink. If you end up drinking but didn't plan on it, find another way to get home. Rideshare services, a sober friend or family member, or a taxi are always better options than driving drunk.

Drunk driving is a criminal offense. However, you cannot charge someone with a crime. Only the government can do that.

What you can do, however, is file a claim for civil damages. If you're involved in an accident with a drunk driver, you become the plaintiff and the drunk driver is the defendant in a civil lawsuit. The only remedy in a civil lawsuit is for you to receive damages in the form of money. In other words, you can recover costs from the accident so you're restored to the financial condition you'd be in if the accident had never happened.

It's important to cooperate with law enforcement and prosecutors if you're asked for a statement, to be a witness, or for other evidence or information related to the criminal case. Not only does it help to provide evidence that could be important for a conviction or sentencing, but a drunk driving conviction might also be helpful to prove fault in your civil claim.

Enjuris tip: There are several steps to take after any car crash that's not your fault, and there are additional considerations if the other driver appears drunk.

For starters, never try to apprehend a drunk driver. If you're in an accident, call 911. You don't know if the person is dangerous, and someone might be more likely to cause harm when drunk than they would if sober. If the person attempts to flee, try to get as much information as possible about the vehicle (make, model, color, license plate) so the police can track them down.

There are a few things to watch for at the scene of an accident that might provide clues as to whether the other driver was drinking. Tell an officer if you observe the following:

Again, don't confront the driver with your suspicions. Wait until the police arrive and share the information with them. Law enforcement is trained to handle these situations, so let them do their job.

Filing a lawsuit against a drunk driver in North Carolina

North Carolina is an at-fault insurance state. If you're in a car crash in North Carolina, compensation for medical treatment and other costs should be covered by the insurance policy of the person who caused the accident.

An insurance settlement can only be up to the amount of the driver's policy limits.

In a serious accident, the minimum coverage might not cover the extent of your injuries. If that happens, your next option would be to file a personal injury lawsuit.

An insurance settlement should cover your medical expenses and property damage. It won't cover non-economic damages like emotional distress (for example, pain and suffering or loss of consortium) or punitive damages.

Punitive damages are in addition to the damages you recover in a personal injury lawsuit. These are intended to punish a defendant for behavior that's considered malicious or otherwise especially risky or reckless. Some courts will award punitive damages in a drunk driving case as a deterrent for other drivers in the community to discourage future drunk driving.

Enjuris tip: You might have heard of “double jeopardy,” which means a defendant can't be tried twice for the same crime. However, you can sue a defendant for damages for your injuries in a drunk driving case even if there are already criminal charges pending or if they were convicted of a drunk driving-related offense.

The other way to file a personal injury lawsuit is a “cause of action” under North Carolina's dram shop or social host laws. Dram shop and social host laws allow a plaintiff to sue a bar, restaurant, or property owner that served alcohol to a drunk driver.

A person or business that serves alcohol can be responsible for a drunk driving accident if:

In many states, dram shop laws apply to patrons of any age, but North Carolina laws are only with respect to underage drunk driving. Tweet this

Social host laws involve drinking at private parties or on private property. A host who over-serves alcohol to a driver who is already intoxicated or who is underage can be held responsible for a plaintiff's injuries in a crash.

Evidence in a drunk driving crash

If you're in a crash and suspect that the driver is drunk, it's imperative that evidence is gathered quickly. The drunk driver is going to become sober as time passes, and then it might be impossible to prove fault on that basis.

Here's what your lawyer will look for as evidence:

North Carolina has 5 tiers of misdemeanor DWI, with Level I being the most serious and Level V being the least severe.

The state also allows law enforcement officers to order chemical tests for drugs. If a police officer suspects that a driver is impaired by a substance other than alcohol, they are permitted to perform drug testing. A driver's license can be revoked if they refuse to take a test.

Here are the different levels of North Carolina DWI convictions and penalties, starting with the least serious:

In The News: Laura's Law added Aggravated Level I to the sentencing guidelines for North Carolina DWI in 2011. Laura Fortenberry was a 17-year-old girl from Gaston County who was killed in 2010 when she was a passenger in a car struck by a drunk driver who had multiple previous DWI convictions. Laura's Law is specifically intended for repeat DWI offenders.

What are Level I and Level II DWI offenses?

All impaired drivers must complete a substance abuse assessment and comply with recommended treatment in order to have their license restored after the revocation period.

If a driver has 3 prior DWI convictions within 7 years, they fall under the Habitual DWI offender statute. This law mandates a minimum active jail term of 1 year and the sentence cannot be suspended.

A repeat DWI offender will no longer have the means to drive. Law enforcement officers may seize a car if the driver is charged with DWI and the driver was driving with a revoked license because of a previous impaired driving offense. Law enforcement may seize the vehicle immediately, and not after trial or conviction.

If convicted, the judge offers the vehicle forfeited. That means the local school board may sell the vehicle and share the proceeds with any school system in the county, or it can keep the car for its own use. The only way the owner can get the car back is by convincing the court that they are not the person convicted of DWI or that they are otherwise innocent.

There is zero tolerance for DWI for commercial motor vehicle drivers and offenders under age 21.

A person under 21 may not drive with any alcohol or illegally-used drugs in their system. If an underage driver refuses a BAC test, they can be convicted if law enforcement detects the smell of alcohol on their breath. An offender's driver's license is revoked for 1 year but they could be granted limited driving privileges if they're at least 18 years old and have no prior convictions.

North Carolina has a zero tolerance policy when it comes to #drunkdriving for underage and commercial drivers. Tweet this

Whether you're the victim in a North Carolina drunk driving-related crash, you lost a loved one to a drunk driver, or you've been charged with a DWI offense, you need a lawyer.

A lawyer can help you when it comes to receiving compensation for your losses or handling the legal system. The Enjuris law firm directory offers a listing of North Carolina personal injury law firms that are qualified and experienced to handle your compensation claim.