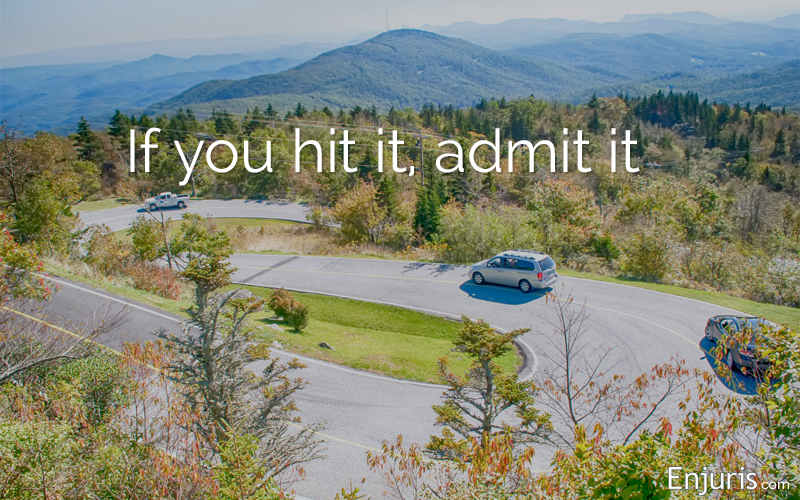 You’re sitting at a red light when you feel a thump from behind. As you turn to see what happened, the driver who hit the back of your car suddenly swerves around you, makes a U-turn, and heads away in the opposite direction before you get a good look.

The collision caused damage to your vehicle and you require a few doctor visits for some whiplash injuries as a result of the impact — not to mention that your neck pain prevents you from going to work for a few days.

What can you do?

You’re the victim of a hit-and-run crash.

A hit-and-run is a crime where a driver leaves the scene of an accident.

North Carolina law requires all drivers to remain at the scene of an accident until police arrive.

You have 2 priorities after a crash. First, receive medical treatment if necessary. Second, obtain compensation for your injuries and damage to your vehicle.

The following are steps you should take after a hit-and-run crash:

Enjuris tip: Never try to pursue a fleeing hit-and-run driver. You don’t know if the person is armed, drunk or high, or dangerous for any other reason. Make as many observations as you can about their appearance and identity, but don’t give chase. It’s the police’s job to apprehend them, not yours.

North Carolina requires uninsured motorist coverage (UM). Most insurance policies include it with your other required coverage, so you probably don’t need to worry about adding it separately. The purpose of UM coverage is if you’re in an accident with a driver who doesn’t have insurance. It also provides coverage in a hit-and-run where the other driver isn’t identified.

Enjuris tip: You can only recover an insurance settlement up to the limit of the uninsured motorist portion of your policy. No one can predict when or how much insurance they need. When you purchase or review your policy, be sure that you have ample coverage in case you need it.

What to do if YOU hit a parked car

You’re required to report the collision to the owner of the vehicle. If you’re able to find the owner immediately, a verbal admission would satisfy this requirement. If the driver isn’t available or identifiable right away, you must make a written report (in other words, leave a note).

Your note must include the following information:

If you don’t leave a note on the vehicle at the accident scene, you must send it to the owner by certified mail within 48 hours after the accident and a copy must also be sent to the North Carolina DMV.

If the collision isn’t with a car, but with an object like a mailbox, telephone pole, building or other structure, you must call the police or the North Carolina DMV.

What is a reportable accident?

A “reportable” accident in North Carolina is any crash that results in:

A hit-and-run in North Carolina can either be a misdemeanor or a felony, depending on how seriously the victim is injured.

Are there defenses to a hit-and-run charge?

Depending on the circumstances, a criminal defense lawyer might be able to make the argument that you’re not guilty of a hit-and-run.

Your rights as a victim of a hit-and-run

If you’re hit by a driver who fled the accident scene, you may be able to file a claim with your own insurance company under your UM policy for injuries and property damage. However, if your injuries are severe and exceed the limits of your policy, you may need to sue the at-fault driver for your damages.

There are a couple of important factors you should know about that can affect the outcome of your hit and run case:

1. You might never learn the identity of the driver who caused your injury.

If that’s the situation, then the case will be between you and your insurance company. Compensations for your damages and injuries would fall squarely into your uninsured motorist insurance because there’s no question of fault (since you don’t know the identity of the at-fault driver).

2. If the driver is identified, a criminal case is separate from your personal injury claim.

You (a private person) cannot charge a person with a crime — only law enforcement can do that. Identifying a hit-and-run driver can, however, allow you to file a claim against their insurance company since the hit-and-run driver is the at-fault party.

Criminal attorneys (both the prosecutor and defense) might come to you or your lawyer to seek evidence of your injuries or damage. It’s often in your best interest to cooperate if you’re asked for a statement, to be a witness, or for other information that might be important evidence. Consult with your injury attorney first.

Enjuris tip: What’s the difference between criminal and civil law? Find out here.

Do you need a lawyer for a North Carolina hit-and-run accident?

Your insurance company’s objective is to pay out the least amount in settlements and minimize its own exposure.

North Carolina is a pure contributory negligence state, which means a plaintiff can’t recover any damages for an accident if they’re found to bear any part of the liability. When a person flees the scene after a crash, it doesn’t necessarily mean that they bear all the fault for the crash. Your insurance company might suggest that you had some percentage of fault. Without both sides of a story, each is hard to prove.

Even if your insurance company finds that you’re not liable for the accident, it still might not offer a settlement that covers the full extent of your accident-related costs. The amount of your settlement or payout from the insurance company should cover every expense you incurred as a result of the accident — that includes medical treatment (both current and ongoing), lost wages, property damage, and any other costs that you paid for the crash.

If the settlement offered by your insurance company doesn’t cover those expenses to the full extent, you should call a personal injury lawyer immediately.