Accident Help (Home) » Injury Blog » Should You Sue an Uninsured Driver After an Accident? 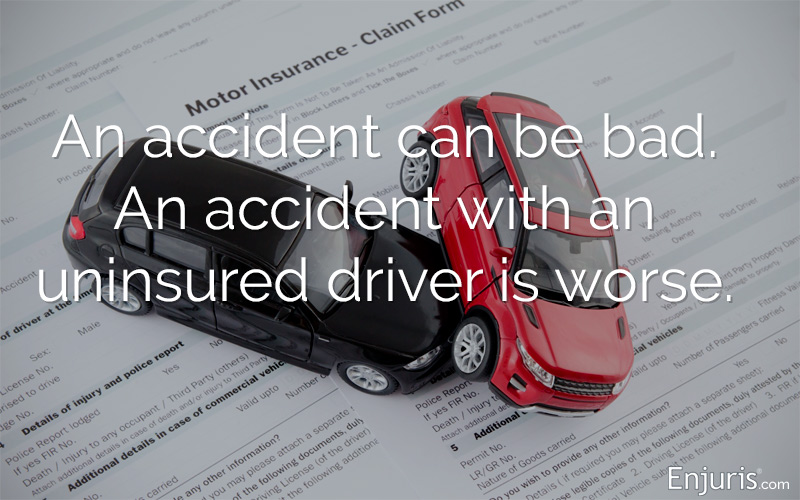 The legal system is designed to restore a plaintiff (accident victim) to the financial condition they were in before an accident or injury occurred.

In theory, if you were injured or experienced a loss of property as a result of someone else’s negligence, you should be able to recover the amount you need to cover your expenses. When the accident is a motor vehicle collision, the at-fault party’s insurance should cover your costs.

But what if the other driver was uninsured?

The process becomes more complicated if the at-fault driver didn’t have insurance. Or, they might have some insurance, but a basic liability plan might not include sufficient coverage for your losses.

If you don’t have uninsured motorist coverage on your own insurance policy, you cannot make a claim or recover damages against an uninsured driver.

Your insurance company might decide to subrogate the claim.

In other words, it might sue the other driver or make a claim against their insurance company (if they had some insurance, but not enough).

Fortunately, that’s between your insurance company and the other driver’s, and it doesn’t affect you.

By the same token, if you don’t have uninsured motorist insurance, and the at-fault driver doesn’t have insurance, you only have one option: to file a personal injury claim against the driver.

Notify your insurance company right away if you’re planning to file an uninsured motorist claim.

Some insurance policies have strict deadlines and won’t cover you if you don’t notify in time. If you believe that the other driver is uninsured, or if they won’t provide insurance information at the time of the accident, call your insurance company immediately.

If your insurance company is representing you against another insurance company, the 2 companies will negotiate with one another to reach a settlement. If the settlement isn’t what you believe you deserve, and if you can’t reach resolution on appeal, you’d hire a personal injury lawyer to file a lawsuit.

It’s slightly different if you can’t reach agreement in an uninsured motorist claim against your own insurance company. In that situation, you’d go to binding arbitration. Arbitration is less formal than litigation, but “binding” arbitration means you need to stick with the outcome.

In this scenario, both parties would appear for a hearing before an arbitrator or panel of arbitrators who act like judges. Each party would present their arguments and the arbitrator would make a decision.

When to file a personal injury lawsuit against an uninsured driver

If the world (and the legal system) worked perfectly, here’s how a legal proceeding would play out after an accident. 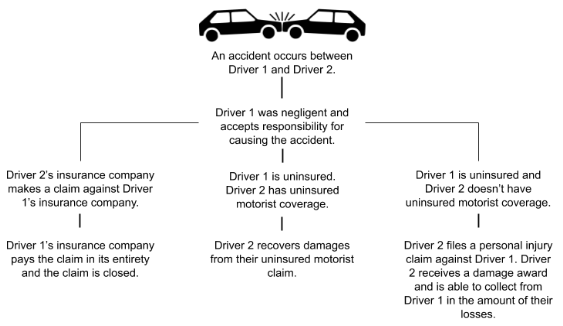 But the reality is that the aftermath of an accident is rarely this easy to navigate.

First, if there are questions about who was at fault, or if you share liability, that’s going to affect how you proceed.

Second, even if you’re certain the other driver was 100% at fault, there’s still a question of whether they have the assets to pay a judgment for damages if your claim is successful.

We can’t generalize that every uninsured driver has no assets, but if they’re driving a car without insurance, the reality is that they might not have the money to pay a personal injury judgment.

If you’re granted a judgment against a defendant who has no assets, they might declare bankruptcy. Bankruptcy means they’re no longer responsible for paying the judgment, and you won’t recover any compensation.

However, there are good reasons to file a personal injury lawsuit.

For example, say the cost of your injuries came to $400,000. If your uninsured motorist coverage maximum is $200,000, you might be able to recover the remaining $200,000 through a personal injury lawsuit.

What if you don’t have uninsured motorist insurance AND the other driver has no money to pay a judgment?

This is a good reason why you should get uninsured motorist coverage.

When you’re in an accident with an uninsured driver, you have two options:

If you don’t have coverage, a lawsuit is your only option.

If the driver doesn’t have money to pay a judgment, you’re probably never going to see any of the money. That’s why uninsured motorist coverage is your best bet to receive any compensation following an accident with an uninsured driver.

What to do if the defendant doesn’t pay damages

If you win a judgment against a defendant who can’t or won’t pay, you can return to court and apply for an order that requires payment. However, the court might not require payment when it’s aware that the defendant legitimately has no money to pay.

Enjuris tip: You might have a hard time finding a lawyer who will file a lawsuit against a defendant who has no money. It’s a waste of the lawyer’s time to pursue a lawsuit when their client (you) will probably never receive any money, anyway. Your lawyer will probably run a credit and asset check on the driver before filing a lawsuit.

But there are 2 ways to recover money from a defendant who won’t pay a judgment:

Should you file a personal injury lawsuit against an uninsured driver?

Primarily, it depends on the uninsured driver’s ability to pay. Your personal injury lawyer can advise you about whether the defendant has assets that would cover your injuries, either partially or wholly. But, the best-case scenario is still to use your own uninsured motorist insurance as your first resource for compensation against an uninsured motorist.

A lawsuit is meant to make the plaintiff “whole” — in other words, the purpose is to restore you to the condition you were in before the accident. Most personal injury lawyers work on a contingency basis, which means they don’t get paid until you recover damages. When you recover, they receive a percentage of those damages.

But money isn’t the last deciding factor. A lawsuit requires time and could be stressful for all parties involved. A lawyer likely won’t take a case to court unless they believe they have at least a 50/50 chance of winning. So even if you “win,” you haven’t really won anything if the defendant can’t pay your damages.

You might have to pay court costs, fees for expert witnesses, administrative costs for your lawyer to do asset checks or background checks on the defendant, or other legal expenses. If the defendant can’t pay for the damages, you’ll have lost all of the money you spent on a lawsuit.

Is it worth it?

You can ask a lawyer. Begin by using the Enjuris Personal Injury Law Firm Directory to find a lawyer in your area who can advise you of how to proceed to receive recovery damages.