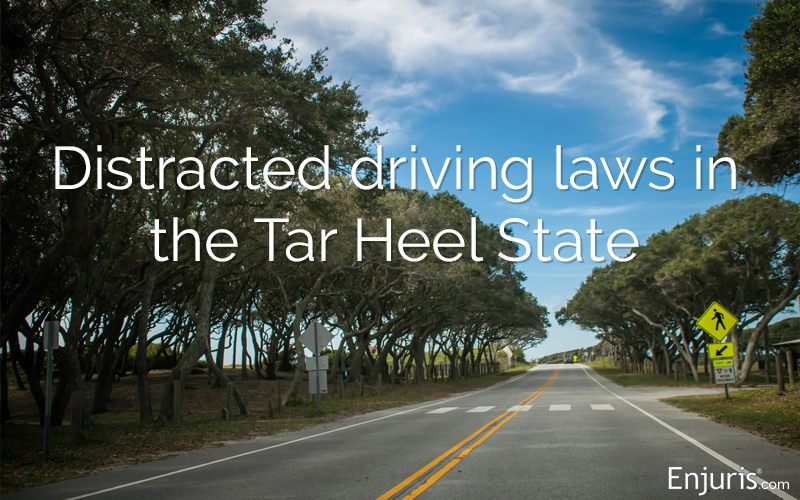 Distracted driving is a big problem in North Carolina. From the Outer Banks to the Appalachian Mountains, people across the state often make the mistake of not making driving their number one priority when behind the wheel.

This problem isn’t just restricted to the Tar Heel State though.

There are 21 states that prohibit all drivers from using hand-held mobile phones while driving. Forty-eight states ban text messaging for all drivers.

Distracted driving is any action that meets one of these 3 criteria:

Examples of distracted driving behavior could include (but isn’t limited to):

How big a problem is distracted driving?

Anyone who drives a car, rides as a passenger, or uses the roads as a bicyclist or pedestrian should be concerned about distracted drivers. Fortune describes distracted driving as an “epidemic” in the U.S.

An insurance company survey conducted a few years ago asked 2,300 drivers about their driving habits. Ninety-six percent of respondents said that they believe they’re safe drivers, but more than half of those people (56 percent) admitted that they’d used their phone while driving.

Data from the company’s app, which can track users’ phone use, indicated that 96 percent of drivers used their phones at least once a month while driving, and that most drivers average 1 call per trip. However, the app cannot track a conversation on speakerphone or Bluetooth (because the user doesn’t pick up the handset). This means the recorded usage was either texting or hand-held conversations, which suggests that the actual amount of time spent on phones is likely even higher than what’s reflected by this data.

The National Highway Traffic Safety Administration (NHTSA) reported that 3,166 people were killed by distracted drivers in 2017, the most recent year for which data is available.

The NHTSA Fatality Analysis Reporting System (FARS) reported that there were 93 fatalities in North Carolina in 2018 attributed to the driver being distracted at the time of the crash. These distraction-related crashes were 8 percent of all North Carolina traffic fatalities. 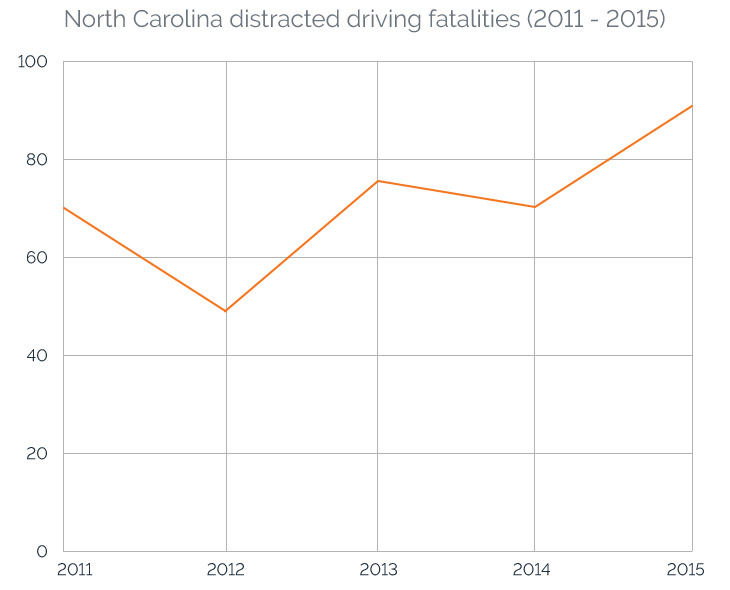 The NHTSA provides this data for North Carolina distracted driving fatalities from 2011-2015: 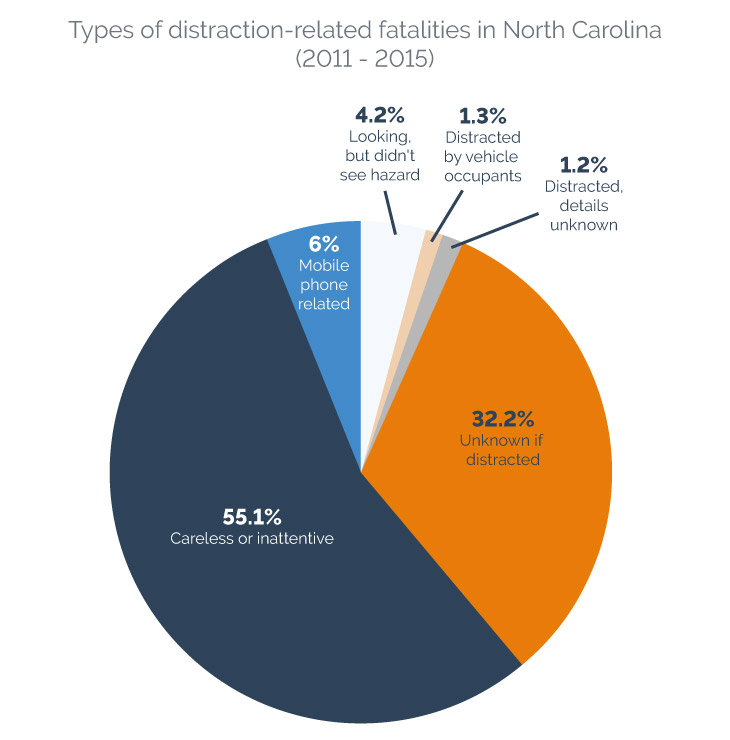 These figures represent fatalities, meaning an accident where a person (or more than one person) died. There are far more crashes where people survive and the injuries can be devastating.

Research indicates that reading and writing text messages slows reaction time just as much (if not more) than driving drunk.
Tweet this

The NHTSA has said that sending or reading a single text takes an average of 5 seconds. In those 5 seconds, a person driving 55 miles per hour can travel the entire length of a football field. In essence, you’ve driven the length of that football field with your eyes closed.

Is that a risk you want to take?

And yet lots of people do. Although officials continue to promote distracted driving awareness campaigns, it continues to be a problem.

North Carolina allows talking on a mobile phone while driving, but the law does prohibit texting and emailing when behind the wheel.

North Carolina doesn’t ban hand-held mobile phones for all drivers, but the devices are banned for school bus drivers and drivers under 18 (also called “Novice Drivers”). All drivers are prohibited from texting while driving in North Carolina.

Enjuris tip: Even if some distracted driving behaviors may not technically be illegal, you should still avoid them because they greatly increase your risk of being in an accident.

Under current law, distracted driving penalties in North Carolina are:

Are there exceptions to North Carolina’s texting driving law?

Texting is permitted in North Carolina only when:

We’ve talked a lot about how you can be affected by someone else’s distracted driving, but there are also things you can do to make sure that you are not distracted behind the wheel. Here are some actionable tips to avoid causing a distracted driving accident:

There must be clear evidence of negligence after an accident in order to receive a settlement or award in North Carolina. In other words, if you were injured in a North Carolina car accident, the claim will settle in your favor only if the other driver was 100% negligent (at fault for the accident).

An addition to distracted driving, a driver can be negligent in a variety of ways:

You can recover these compensatory damages after a North Carolina car accident:

If the driver is found to be grossly negligent, the court might award punitive damages in addition to the regular damages that are awarded to cover your medical and other costs from an accident. Punitive damages are awarded when the defendant’s behavior is so egregious or malicious that the court determines that it warrants punishment.

If the court awards punitive damages, this amount is capped at 3 times the amount of the compensatory damages. These damages might be awarded if the defendant is found to be grossly negligent. Gross negligence could include drag racing, road rage, distracted driving, or drunk driving.

Do you need a lawyer after a North Carolina distracted driving accident?

One exception is gross negligence. If you’re the plaintiff in a car accident where another driver was distracted, you still might not be able to recover damages if you had any amount of liability, no matter how small. This could mean that the court determines you could’ve braked a moment sooner, been more alert to the possibility of a crash... anything.

Enjuris tip: If your lawyer can make a successful argument that the other driver was texting or involved in another activity that was undeniably distracting to the point of gross negligence, they might be able to persuade the court to make an exception to the pure contributory negligence rule.

Distracted driving can also be difficult to prove. Phone records might show if a person was actually sending a text at the time of the crash, but they can’t show if the driver was reading a text or using their phone in some other way. And remember — using a phone for a spoken conversation isn’t illegal in North Carolina. So if phone records show that the device was engaged in a call, that might not affect your claim.

For all of these reasons, a lawyer is typically your best bet for attempting to recover damages. Most personal injury lawyers offer a free initial consultation, which means they’ll meet with you in person to review the facts of your case and advise about your best strategy for success. They’ll also tell you whether they think you have a case and what they can do for you.

The Enjuris law firm directory is a great source for finding a North Carolina car accident lawyer near you who has experience, knows local and state laws, and can help you get the compensation you need after your accident.