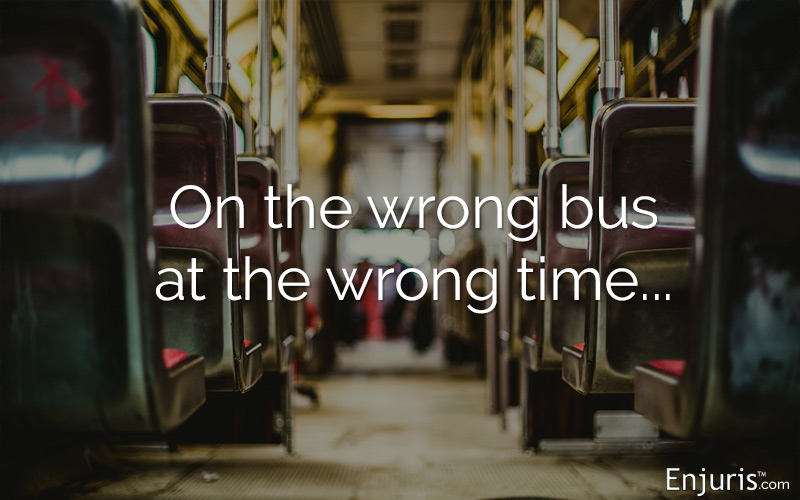 Understanding the causes, liability, and recovery for bus accidents in Montana

In the winter of 1984, a bus carrying members of the Whitefish High School wrestling team home through a late-night snowstorm collided with a fuel tanker on U.S. Highway 2. Though the bus became engulfed in flames almost immediately, the wrestlers worked together to lift and carry injured passengers to a nearby café.

“There was just a ball of fire with the outline of the bus in it,” said café owner Clint Catheart.

So what happens when passengers or drivers are injured in bus accidents like the one on U.S. Highway 2? This article looks at bus accident liability in Montana, including the common causes of such accidents, the legal remedies available to injured parties, potential damages, and the unique procedural rules that must be followed should you decide to make a claim or file a lawsuit after a bus accident.

The term “bus accident” is used to describe accidents involving a variety of modes of transportation. These include:

The laws and regulations, as well as the method of recovery, differ depending on the type of bus involved in the accident.

Causes of bus accidents and who can be sued

Just like regular car accidents, many different factors can lead to bus collisions. These include:

In most cases, bus accidents are caused by the negligence of the bus driver or another person on the road (such as a motor vehicle driver, bicyclist, or pedestrian). In these cases, any person injured in the bus accident can file an insurance claim or file a negligence lawsuit against the person responsible for causing the bus accident.

In order to prove negligence, the plaintiff must usually show that the defendant failed to exercise a “reasonable degree of care” to avoid harming the plaintiff.

However, Montana has adopted the “common carrier doctrine.” This doctrine requires bus drivers to exercise the “highest degree of care,” rather than the usual “reasonable degree of care” with respect to its passengers.

For example, while it might not be considered negligent for a motor vehicle driver to talk to a passenger while driving, it may very well be negligent for a bus driver to do the same under this heightened standard.

Common carriers, including bus drivers, owe their passengers the highest degree of care. Tweet this

What if the bus is owned by a government agency?

Some buses are owned by private companies, but others are owned by state or municipal agencies. Special rules apply when claims are brought against the government. Most notably, a “notice of claim” must be filed with the government agency before any lawsuit can be filed.

Due to the large size of buses and the low speed at which they generally travel, serious injuries and fatalities are rare. On the other hand, the fact that buses are generally not equipped with seatbelts and rollovers are more common than with smaller vehicles, means that injuries certainly can happen when an accident does occur.

In Montana, there are three types of damages available to plaintiffs injured in a bus accident:

Finally, in Montana, the amount of damages you can recover is reduced by a percentage that reflects your degree of fault – so long as you're not more than 50% at fault, in which case you can't recover any damages. This is called the “modified comparative fault” theory.

What to do if you're involved in a bus accident

If you're injured in a bus accident, first get the medical attention you need. Then, consider contacting an experienced Montana personal injury attorney as soon as possible. Your attorney can help you sort out the details of your accident, calculate the potential value of your injury case, and make sure you receive all the compensation you deserve.