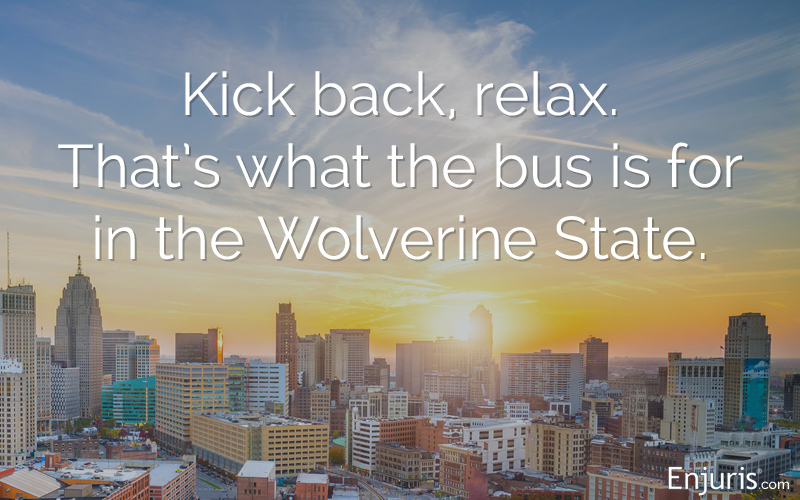 If you’ve been injured in a bus wreck in the Wolverine State, it’s important to know who’s at fault and why that matters.

Do you know why Michigan is called “The Wolverine State”?

Some say it’s because of the population of wolverines that once roamed the Toledo strip (the land along the border of Ohio and Michigan). And though wolverines would wander the state lands long ago, humans have found much more efficient means of transportation since then... like buses.

The Michigan Department of Transportation estimated that 78 public transit agencies transported 80 million passengers in 2019. The state has 5 intercity bus routes that carried 30,108  passengers in 2020, and there are 165 private bus regular routes and charter carriers licensed in the state.

There are also more than 60 local transit agencies.

Michigan bus accidents in the news

Fortunately, no children were on board when a car collided with a Jackson Public Schools bus in Blackman Township. A 51-year-old Jackson man was driving a sedan on W. North Street when he failed to yield to the school bus, which was traveling south on N. Brown Street. The bus hit the passenger side of the car, which rolled over.

An SUV and Flint Metro Transportation Authority bus collided at the intersection of Saginaw and 3rd Streets at about 2 p.m., resulting in the bus crashing into the side of the downtown Flint Paterson Building. Witnesses said that the SUV had been speeding and ran a red light before it struck the bus. Injuries were reported following the accident. (source)

A 23-year-old driver caused a crash that resulted in injuries to a DDOT bus driver at the intersection of Dequindre Street and East Outer Drive in Detroit. The car was speeding and broadsided the bus, which caused the bus to hit several poles and eventually crash into a retail store. The driver was ejected from the bus and hospitalized. The driver of the car was also hospitalized for his injuries. (source)

From these examples and the chart below, you can see that although bus accidents happen, fatalities are rare.

Most bus accidents are caused by the same factors that cause other types of collisions between passenger cars and trucks.

There are a few factors that make a bus accident more likely to result in serious injuries. For instance, a bus has more height and lower weight distribution than a passenger car, which makes it more likely to have a rollover or tip-over accident.

In addition, bus passengers usually don’t wear seatbelts like they do in cars, which means that they are more likely to experience serious injuries in an accident.

There are also bus accidents that happen for reasons other than collisions, and these might include a slip-and-fall when boarding or leaving a bus, or crosswalk or other pedestrian accidents.

Any traffic accident can result in a range of injuries, from very mild to very severe or fatal.

Some serious injuries you might suffer after a bus accident include:

If you’ve been injured in a bus accident, you can make a claim for the expenses related to the accident. These costs can include:

Liability for a Michigan bus accident

If you’re injured in a bus accident, the first question is... who pays?

The question of who pays depends on who’s liable for the accident and if someone was negligent. In the legal world, you often hear the words “liability” and “negligence” used interchangeably, but they are not technically the same.

In a car accident, the question of liability is often between 2 or more drivers. In Michigan, the court will determine each party’s percentage of fault in order to award damages. When an accident happens that involves more than 1 driver, the insurance companies will determine who’s at fault. In many situations, while 1 driver might have caused the accident, there are ways that the other driver might have avoided it and therefore they may be held partially responsible.

This is the “51% Rule” of modified comparative fault.

If you’re a passenger on a bus that’s involved in an accident, you likely don’t have any liability because the operation of the bus was outside of your control.

The exception would be if your behavior was unsafe and you had a role in causing your own injury. For instance, if you were standing or not sitting properly but could have been, and the bus came to a sudden stop and you were injured, you might bear some of the liability.

But if you were without fault for the accident, you need to determine who was negligent if you’re going to recover damages. And that might not be easy.

State and federal regulations include common carrier laws. A common carrier is any individual or business licensed to transport passengers for a fee.

If a common carrier bus company doesn’t do what’s required in order to ensure a safe ride for passengers, the bus company is negligent.

A charter bus or other private transportation motorcoach that’s in an accident is going to be handled differently from a public bus, which is one owned and operated by the city or state.

In many situations, an employer is liable for the negligence of an employee on the job. This applies to bus accidents, too. Even if the driver made a mistake, the bus company could be the liable party.

That doesn’t mean you can’t get the compensation you deserve, though.

Some courts interpret sovereign immunity as inapplicable to school districts, cities, municipalities, and counties — which are likely the operators of the bus system. However, you’d file a claim differently against a government than you do against a private person or company.

10 tips for staying safe before, during, and after your bus ride

When to call a Michigan bus accident lawyer

If you’ve been in a Michigan bus accident, you should call an injury lawyer right away.

Michigan follows a no-fault system of insurance, so your own auto insurance might cover some of your medical expenses.

Enjuris tip:If you don’t have auto insurance, you can receive benefits from the Michigan Department of State Assigned Claims Facility. This is a “last resort” benefits system for auto accident victims who have no other source of insurance and benefits are capped at $250,000. However, if your injuries are severe and exceed the $250,000 maximum, you might need to file a personal injury lawsuit.

It’s important to consult a lawyer as soon as possible following your accident because if you need to file a lawsuit against a government agency that operates the bus system, you might need to provide notice within 6 months of the accident. The statute of limitations (filing deadline) in a lawsuit against a private party would be 2 years from the date of the injury.

The Enjuris personal injury law firm directory is a free resource you can use to find a Michigan bus accident lawyer near you who can help you receive the compensation you deserve.