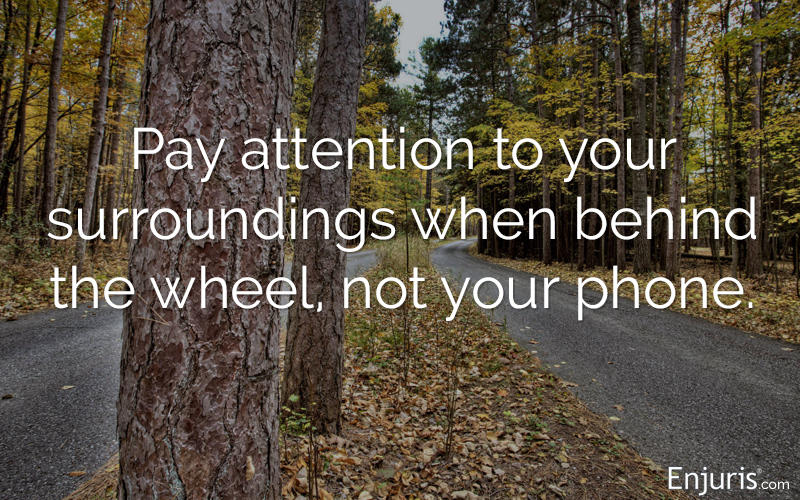 Cell phones aren’t the only distraction you face behind the wheel.

Texting while driving has been prohibited by law in Michigan since 2010. If you’re caught texting and driving, you can be fined $100 for a first offense and $200 for subsequent offenses.

But texting isn’t the only way you can be distracted while driving.

There are 3 types of distractions:

Visual: Any activity that takes your eyes off the road.

Manual: Any activity that requires you to take your hands off the steering wheel.

Cognitive: Any activity that takes your mind off the task of driving.

Even the most careful driver occasionally does something that’s considered a distraction — and more important than it the fact that it’s against the law is the reality that distracted driving is dangerous.

What activities cause distraction while driving?

Certainly, this is not a complete list of distractions you could experience, but they’re the most common.

The science behind texting and driving

The National Highway Traffic Safety Administration (NHTSA) reported that 3,166 people were killed by distracted drivers in 2017, the most recent year for which data is available.

Real Life Example:Example: 17-year-old Kelsey Raffaele of Sault Ste. Marie was killed on January 24, 2010. Kelsey was driving on a 2-lane road and her best friend Stacey Hough was in her own car, following from behind. The teen tried to pass a slower-moving vehicle, but an SUV was headed in her direction in the oncoming lane. Kelsey crossed the center line, but she then hit a snowbank and crossed back across the centerline, when she was hit by the SUV.

Kelsey and Stacey were on the phone with each other at the time of the accident. Stacey died in a separate car accident in April 2019.

Kelsey Raffaele’s mom, Bonnie, was a strong advocate for what became known as Kelsey’s Law, which makes it illegal for teen drivers to use a cell phone while behind the wheel, but allows a phone connected to Bluetooth or otherwise integrated into the vehicle.

Specifically, Michigan state law says that teen drivers with a Level 1 or Level 2 driver license are prohibited from:

The only exceptions are:

It’s true that drivers under 20 years old have the highest rates of distraction-related fatalities, but distracted driving isn’t just a teenage problem. For one thing, it affects everyone — not just the driver, but any person who shares the road as a driver, pedestrian, or bicyclist.

In a survey by the Centers for Disease Control and Prevention (CDC), 42% of high school students reported sending texts or emails while driving within the month prior to the survey.

The students who reported frequent texting while driving were also less likely to wear a seatbelt, more likely to ride with a driver who had been drinking, and more likely to drink and drive.

However, two-thirds of adults have admitted to reading texts at a red light and more than a quarter of drivers have sent texts while driving. But texting and driving is just as dangerous as driving drunk.

Many adults would never drink and drive, but they think it’s fine to send a quick text or eat a sandwich while behind the wheel. #DistractedDriving kills. Tweet this

Texting and driving is a primary offense in Michigan

Penalties for a Michigan texting and driving accident

If a driver is texting while driving and causes an accident, there are different criminal penalties than an accident where there’s no texting involved.

Liability in a Michigan texting and driving accident

Criminal penalties for texting and driving can affect the driver involved in a crash. But a criminal sentence for a guilty driver doesn’t financially help the person who was injured.

Michigan is a no-fault insurance state, which means an insurance company covers its own policyholder for their injuries, regardless of who is at fault.

However, in a texting and driving accident, you can sue the texting driver for your injuries or for the wrongful death of a family member. This can include damages for pain and suffering and other expenses.

When an accident happens that involves more than 1 driver, the insurance companies will determine who’s at fault. In many situations, while 1 driver might have caused the accident, there are ways that the other driver might have avoided it and therefore they may be held partially responsible.

If you were injured in a car accident and can prove that the other driver was distracted, it would likely increase their percentage of liability.

Often, texting is the easiest type of distraction to prove because a lawyer can subpoena cell phone records that show exactly what time calls were made, texts were sent, and other functions used, which means they have a better picture of what the driver was doing at the time of the crash. Other types of distractions like eating, passenger behavior, or other activities would be more difficult to prove absent witness testimony.

What if the driver is texting as part of their job?

If a person is texting or reading texts related to their job, and if the employer knows or should know that the person is driving while texting, both the driver and the employer could be sued for negligence.

Employers should make it clear to employees that texting and driving is not acceptable and not permitted.

We’ve talked a lot about how you can be affected by someone else’s distracted driving, but there are also things you can do to make sure that you are not distracted behind the wheel. Here are some actionable tips to avoid causing a distracted driving accident:

As a driver, you have a duty to every other person who shares the road — other drivers, passengers, pedestrians, and bicyclists. That means you have a legal duty to each of those people, as well, which is to avoid behaving in any way that would cause them harm or injury.

Enjuris tip:Mobile phones have become commonplace, and nearly every driver has one, whether you’re 16 or 86. But your duty extends beyond the steering wheel and brakes... often, it’s your mind that’s the most compromised if you become distracted, and that’s when accidents happen.

Along those same lines, if you’re the victim of distracted driving, you deserve to receive financial compensation.

The purpose of the personal injury law system is to make an injured person whole. While no court or lawsuit can heal your physical injuries, the legal system is designed to restore you to the financial condition you’d be in if the accident hadn’t happened.

In that effort, you may be able to recover damages for:

Michigan also awards exemplary damages, which are added compensation awarded to the plaintiff if the defendant’s behavior is especially egregious or if they had a chance to avoid harm and didn’t do so.

For these reasons, it’s important to seek the advice of a qualified attorney. Your attorney will minimize your liability for the accident and maximize the amount of damages you can recover.

If you’re searching for an experienced Michigan car accident attorney, we invite you to browse the free Enjuris law firm directory.

Just don’t call them while you’re driving — even the most important phone calls can wait until you’ve arrived at your destination.