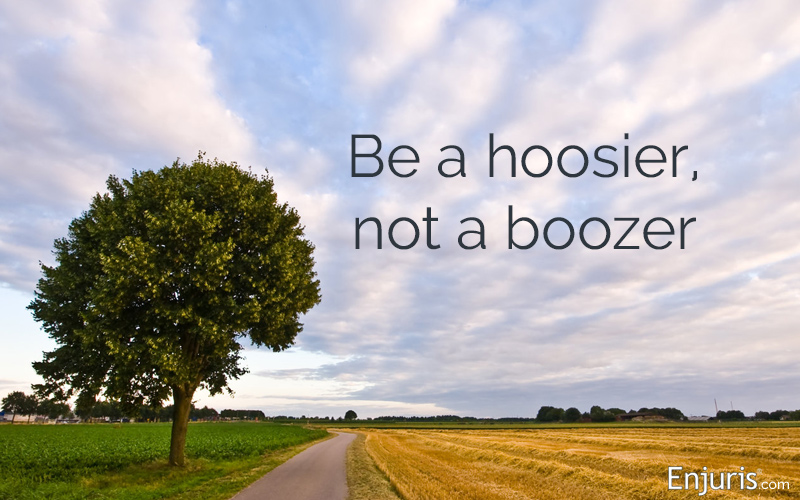 A little after 9 o’clock on a spring evening in Southern Indiana, the frantic calls started coming into 9-1-1.

“Oh my God, there’s somebody on the highway and they’re driving the wrong way and they just smashed somebody. Oh my God, those people are dead. There’s no way they survived that.”

The wrong-way driver, 31-year-old Taylor Barefoot, had left a work party at the Sazerac Distillery in Albany, Indiana, where a subsequent investigation found that she had been visibly intoxicated. She drove her SUV eastbound on Interstate 265 and struck a Chevrolet Cavalier head-on.

The 2 women and the child in the Chevy Cavalier were killed instantly. Taylor Barefoot survived.

This is a tragic story, and one that happens all the time in Indiana — from South Bend to Indianapolis to Evansville.

In this article we’ll take a look at the laws concerning driving under the influence in Indiana, as well as the steps you should take if you or a loved one are involved in an accident with a drunk driver.

Operating a vehicle while intoxicated (OVWI) in Indiana

In Indiana, you’re guilty of OVWI if you’re operating a vehicle and:

Raymond decided to drive home after having 2 beers at a bar in Bloomington. On the way home, a police officer noticed that Raymond was swerving over the centerline. The officer pulled Raymond over. During the traffic stop, Raymond slurred his words and appeared confused. The officer administered a breathalyzer which showed that Raymond’s BAC was .05%.

Because Raymond’s BAC isn’t .08% or higher, he’s not per se guilty of OVWI. However, the officer can still arrest Raymond for OVWI because his thoughts and actions appear impaired by alcohol.

Indiana (along with most other states) has something called an “implied consent law,” which requires anyone who operates a vehicle to submit to a chemical sobriety test (blood test, urine test, or breathalyzer) if asked to by law enforcement.

If you’re pulled over and refuse to submit to a chemical test, your license will automatically be suspended for 1 year and you could face additional penalties.

Are checkpoints legal in Indiana?

Some states prohibit law enforcement from using sobriety checkpoints. In these states, checkpoints are thought to violate state constitutions because vehicles are being stopped even though the police have no reason to believe a crime or traffic violation has been committed.

In Indiana, however, sobriety checkpoints are perfectly legal so long as the locations are random and the duration is temporary.

Penalties for operating a vehicle under the influence in Indiana

If you’re convicted of OVWI in Indiana, you’ll face strict penalties. But, there are two consequences you’ll face just for being arrested:

Once convicted, the penalties will depend on whether or not it’s your first offense:

Dram shop laws (named for shops where alcohol was traditionally sold by a small unit of liquid called a “dram”) address whether an employee or owner of an establishment (usually a restaurant or bar) can be held liable for a crash caused by a drunk driver who was served by the establishment.

What’s more, dram shop laws extend to social hosts in Indiana. In other words, if you throw a party at your house and serve alcohol to a visibly intoxicated guest, you’ll be liable if the guest leaves your party and crashes.

Real Life Example: A 27-year-old woman, Adre’Onna Milligan, died in a crash on Production Road in Fort Wayne, Indiana. Her parents filed a wrongful death lawsuit against the Cover Girls night club, alleging that the establishment continued to serve Milligan despite knowing she was intoxicated. The family is hoping to recover burial and funeral expenses, as well as the loss of Milligan’s love and companionship.

If you’re injured in a car accident caused by an intoxicated driver, you can file an insurance claim. If, however, the driver is uninsured, the insurance company doesn’t offer you enough money to settle your claim, or your damages exceed the applicable policy limits, you’ll need to file a personal injury lawsuit against the intoxicated driver.

Facing factsAccording to the Indiana University Public Policy Institute, there were 3,990 alcohol-impaired collisions in 2018. Of these collisions, 63 claimed at least 1 life. The good news is that the number of fatal car crashes involving impaired drivers has fallen every year since 2014 when there were 101 fatal crashes.

In Indiana, you can recover the following damages through a personal injury lawsuit:

Additionally, because the driver was intoxicated, you may be able to recover punitive damages.

Enjuris tip: When it comes to drunk driving cases, liability is generally not an issue. Instead, cases tend to focus on the appropriate amount of damages. Before accepting a settlement offer, talk with an attorney to make sure the offer is fair. Attorneys are often able to identify damages you haven’t considered. In the meantime, you can find out more about how much your injury claim is worth.

Just like any other accident, your health should be your first priority. Call an ambulance or have someone call one for you if you’re hurt.

Once you’ve taken care of your immediate health concerns, call the police so they can come out to the scene of the accident and draft a police report. Be sure to let the responding officer know that you suspect the other driver is intoxicated. Your statement may help the officer establish the necessary reasonable grounds to administer a field sobriety test.

In addition to calling the police, look around for witnesses and collect their contact information. You should also take photographs of the scene, including anything that might support your claim that the other driver was intoxicated (empty beer bottles on the side of the road, for example).

Drunk driving accidents can be traumatic and can result in significant damages. If you or a loved one has been involved in a drunk driving accident, use our free online directory to reach out to an Indiana personal injury attorney in your area. An attorney can help you navigate the aftermath of the accident and recover the damages you deserve.