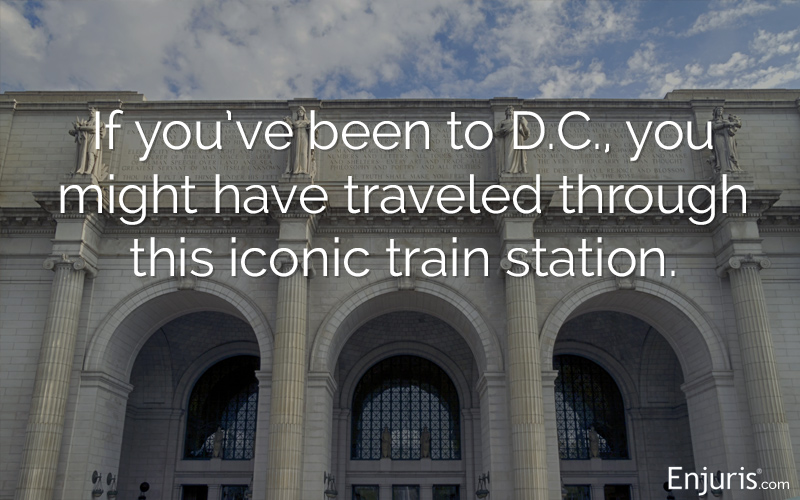 Lots of people ride the rails in our nation’s capital, either as commuters or tourists

It would be unusual to be injured because of a train derailment or crash. Railroads are highly regulated and extremely safe. The more likely way you could be injured in a train accident is if you have a slip-and-fall on a train or on the platform; or if you’re injured as a driver, pedestrian, or bicyclist crossing the train tracks. You also could experience a train-related injury if you’re a railroad employee.

Washington, D.C. is unique because the jurisdiction is only the city itself. Jurisdiction (the court that handles injury claims) usually lies in the location where the accident happened.

This could make cases complicated in places like Washington, D.C. or New York City, which both have commuters who cross state lines daily. Many New York City commuters come into the state daily from the tri-state area (which includes New Jersey and Connecticut), and Washington is the same — much of the D.C. workforce is traveling into the jurisdiction from Maryland and Virginia. If you’re in a train accident, where the accident was located will have a big impact on your claim.

Riding the train in Washington, D.C.

There are 2 primary commuter rail services in Washington, D.C.: Virginia Railway Express (VRE) and Maryland Area Regional Commuter (MARC). The combined average weekday ridership was about 60,000 people prior to the pandemic.

The Metrorail is another D.C. transit service that transports more than 600,000 people a day throughout the metro area and has 91 stations in D.C., Virginia, and Maryland.

If you’re traveling from another city, you can take the Amtrak rail system. Amtrak is an extensive network of trains that run throughout the U.S., and there’s a hub at Union Station in D.C.

The common theme among these accidents is that in each, the victim was not a train passenger. They each were killed because they were hit on the tracks.

However, there have been a few incidents where trains actually did crash.

For instance, a Metro operator was killed during the Blizzard of 1996 because the train where he worked failed to stop at the Shady Grove station. It overran the platform and struck another train, which was unoccupied. The crash resulted from a failure in the train’s braking system.

In an incident in 2019, 2 train operators were injured after their respective trains collided between Foggy Bottom and Farragut West while moving toward their rail yards.

There were also 2 train collisions in 2009, in June and November. In the June incident, 2 Red Line trains collided, killing 9 people and injuring more than 70 others. The November accident resulted in 3 Metro employees suffering minor injuries.

There are a few ways you could experience a train accident:

The majority of train-related fatalities involve a person being killed as they walk along or cross a train track in the path of an oncoming train.

Any transportation company that carries people or property from one location to another is called a common carrier. That means railroads like Amtrak and the Metro are both common carriers, and they have a duty of care to keep passengers safe.

What are a railroad company’s responsibilities to its passengers?

Among these federal regulations are limits on the number of hours a train engineer or operator may work without a break. It’s crucial that train personnel get adequate sleep between shifts in order to perform at their best capacity when driving the train. However, fatigue is still a big problem in the train industry.

In some circumstances, a train driver is required to turn a train around and return it to a starting point for a new run before the driver can take a break — and that can mean a very long shift. And, not every train operator follows the rules. Train engineers do occasionally fall asleep on the job.

There are other potential defendants after a train accident, including the track owner (which could be a private company or government agency), car or truck driver who caused the accident, or the manufacturer of a part that failed.

However, an injured railroad employee — unlike any other type of worker — doesn’t file a workers’ compensation claim. Instead, they file a lawsuit under the Federal Employers Liability Act (FELA) to receive benefits for their injuries.

Under workers’ compensation, you don’t need to prove negligence in order to receive benefits. FELA is a little different because the injured worker does need to show that the railroad was negligent in order to be compensated for their work-related injury costs.

Enjuris tip:Learn more about the difference between FELA and workers’ compensation.

The District of Columbia follows a pure contributory negligence standard, which means if the plaintiff shares any degree of fault, they can’t recover damages for an accident.

Most of the time, a passenger who is injured in a train accident is not negligent. You can’t control the train, obviously, and if a collision happens, there’s nothing you could have done to prevent it.

But in other kinds of train accidents, you could be partially at fault and that can derail your ability to receive compensation.

Rider Rihanna needs to get a train from Union Station to New York. She has an important meeting in the afternoon, and the next train will get her there on time. But she’s running late. Still, Rihanna is determined to get on the train and she’s dashing through the station as fast as she can in order to make it.

Just before Rihanna gets to the platform, Careless Calvin spills a “big gulp”-sized drink on the platform, right where the door to the train is located. Calvin isn’t too concerned, but a station employee sees the spill. There are hazard cones nearby (and a mop in the closet), but Employee Edward is about to go on break. He sees the mess on the ground, but he figures someone else will take care of it. He tells Coworker Carrie that there’s a spill, and he vaguely describes where it is, but she’s doing something else and says she will get to it later.

Rihanna is just about to make the train, but as she runs for the door she doesn’t notice the spill. She slips and falls and is badly injured as she steps onto the train.

Can Rihanna claim that she was injured because of the railroad’s negligence?

Yes, the railroad station was negligent since both Edward and Carrie were aware of the spill and neither cleaned it up or made sure that someone else would take care of it. But Rihanna could be negligent, too, since she was running.

Although the spill wasn’t her fault, the station company could argue that if she had been walking at a normal pace and using her senses reasonably, she would have known it was unsafe to run on a train platform and she would have seen the spill and gone around it so as not to fall.

Under Washington, D.C. negligence laws, Rihanna would not be able to recover compensation if she had any fault for her own injury.

Whether you’re a driver, cyclist or pedestrian, it’s important that you’re always aware of where a railroad crossing is and how to avoid an accident.

Here are 5 tips for avoiding a train accident as a driver or pedestrian:

The majority of trains carry cargo or freight that might include toxic chemicals or flammable gases or fluids. Even if there isn’t a large collision, there’s always a possibility of a chemical leak. Even if you’re certain that you’re far enough away from the train to avoid being physically hit, it’s important to keep ample distance in order to stay safe from exposure to toxic substances in the event of a leak.

It might be tempting to walk, bike, jog, walk your dog, ride a motorcycle, take photographs or engage in other activities near train tracks because, for the most part, there aren’t other people around. But this is a mistake.

If you are in the vicinity of a train track, remove your earbuds or headphones. A train can be loud, but when coupled with other ambient noise you can miss hearing it, especially if you’re listening to something else and distracted. Many railroad fatalities happen because of people using train tracks for these reasons and they don’t see or hear the train approaching.

Consider the size and weight of a train as opposed to your car. There’s no question that the train would fare better in a collision than a passenger car or truck.

Next, think about the amount of time it takes your car to stop. The typical car traveling at 55 miles per hour would require about 300 feet to come to a full stop. A train, on the other hand, takes far more time and a much longer distance to stop, in part because the engine has hundreds of thousands of additional pounds behind it.

By the time the conductor sees a car or person on the train tracks, it’s likely already too late to stop a moving train before a collision.

4. Don’t rely on how far away you think the train is.

Visual distance indicators might be misleading. A locomotive is designed to be streamlined, which means it gives the appearance of being farther down the track than it actually is. If you see or hear a train, stay away from the tracks until it has passed, even if you believe it’s far enough away that you could cross in time.

Maybe your home is near the train tracks and you hear the whistle reliably each day at 3 pm. Or perhaps you routinely cross the tracks as you head to work and you’re certain you know when to expect the train.

While the train schedule might be fairly regular, there are a variety of reasons why it might change — weather, loading issues, personnel changes, etc. Always be cautious and check for a train approaching, even if you don’t think it’s the right time.

If you or a loved one were seriously injured in a train accident, you can claim damages to recover costs for items that include:

If you were involved in a train accident, you should contact a Washington, D.C. personal injury lawyer to get help navigating the legal system, determining liability, and understanding regulations and laws specific to railroads and railroad-related injuries.