A “hit-and-run” is a traffic accident in which one of the drivers involved in the crash flees the scene without stopping to provide their information or assist the other people involved in the accident.

Hit-and-run accidents happen for all kinds of reasons. A driver might flee the scene of a crash because they’re scared, uninsured, or they simply don’t realize they hit something.

Unfortunately, hit-and-run accidents can be particularly devastating because the victims may be left with little or no recourse for recovering damages.

In this article, we’ll answer all of the questions you may have about hit-and-run accidents in Connecticut.

How common are hit-and-run accidents in Connecticut?

A hit-and-run crash happens somewhere in the United States every 43 seconds, according to the National Highway Traffic Safety Administration (NHTSA).

In Connecticut, there are roughly 4.8 hit-and-run crashes involving at least one fatality every year. What’s more, hit-and-run accidents are on the rise.

James and Barbara Tamborras were leaving a funeral on December 10, 2021, when they were struck by an Acura SUV on Bank Street in Seymour, Connecticut. James died at the scene, while Barbara died several days later.

Following the crash, Jair Irigoyen-Flores fled the scene and hid his Acura SUV. Jair’s brother was interviewed by the police after the accident as a result of an anonymous tip, but he lied to the police about the car his brother was driving on the night of the accident.

Jair booked a one-way trip to Mexico but was apprehended outside his West Haven home the morning his flight was scheduled to leave.

Police charged Jair with two counts of second-degree manslaughter, Class C felonies punishable by up to 10 years in jail.

Jair’s brother was also charged with helping to cover up Jair’s involvement in the crash.

What is considered a hit-and-run in Connecticut?

The law requires you to take 3 steps if you’re involved in an accident that causes an injury, death, or property damage:

If you collide with an unoccupied vehicle, you must:

If you fail to take these steps, the police can charge you with a hit-and-run.

What are the penalties for committing a hit-and-run in Connecticut?

The penalties for a hit-and-run accident depend on the damages that you cause.

Fleeing the scene of an accident is never the right decision, but sometimes people panic.

If you fled the scene of an accident, you should immediately call the nearest police station and provide notice of the accident, along with your contact information. Doing so might not save you from a hit-and-run conviction, but it’s the right thing to do, and it may result in you receiving a lesser sentence than if law enforcement tracks you down.

What should I do if I’m the victim of a hit-and-run crash in Connecticut?

If you’re involved in a hit-and-run accident, your first step should be to pull safely to the side of the road and take a deep breath. Chasing a fleeing driver puts you and everyone else on the road in danger.

Once you’ve calmed down (as much as possible), call the police and provide them with any information you have about the hit-and-run vehicle (make, model, color, license plate, distinguishing features, physical description of the driver).

It’s also a good idea to take time-stamped photos of the damage to your vehicle and to visit your doctor to document any injuries you sustained. 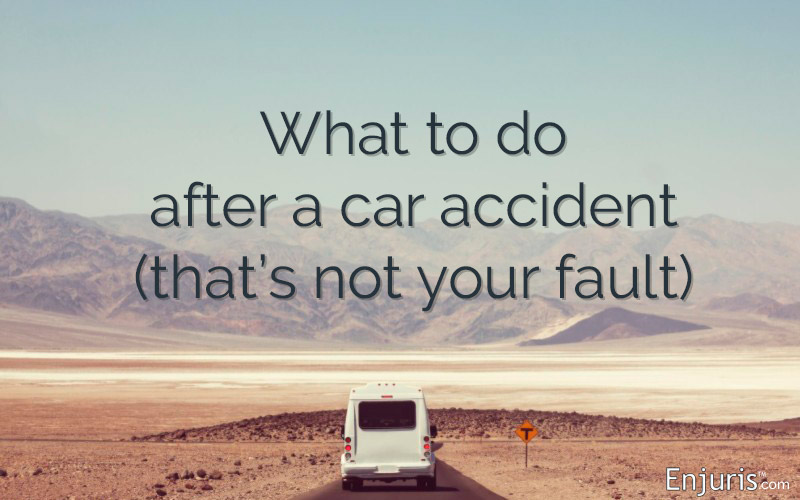 Steps to take after a severe car crash or minor fender bender when you’re not to blame.

How do I recover damages after a hit-and-run accident in Connecticut?

If you or the police are able to identify the hit-and-run driver, you can make a claim against their insurance or file a personal injury lawsuit against them.

If you’re unable to identify the hit-and-run driver, the following insurance policies may provide coverage:

How does a hit-and-run accident impact your insurance?

Hit-and-run accidents can be scary and frustrating, but you have legal options. Consider meeting with an experienced attorney following a hit-and-run crash. In the meantime, these additional resources may help: