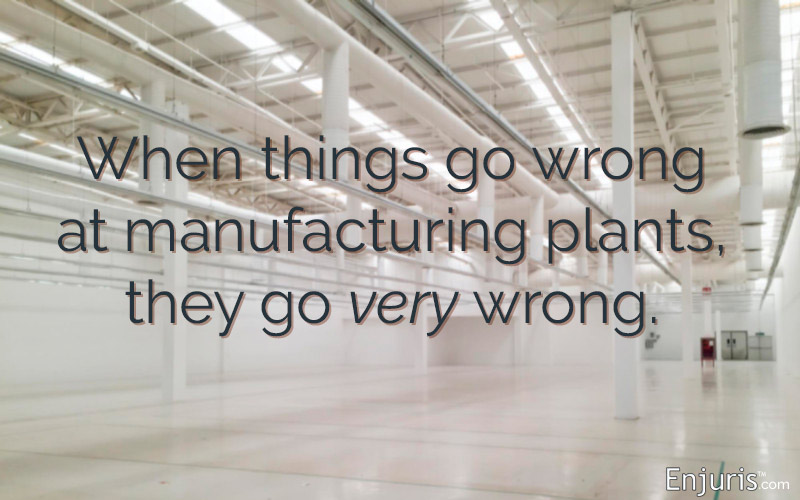 Remedies under the law for industrial injuries in Colorado

Table of Contents + show
Remedies under the law for industrial injuries in Colorado
OSHA and federal regulations
Colorado’s workers’ compensation system
Claims against third parties
Suits for wrongful death
Manufacturing plants can cause catastrophic injuries and even kill their workers. Because of this, laborers need to know the types of lawsuits available and how they can collect damages to cover their medical bills, should an accident occur.

Safety codes are becoming much stricter as time goes on, but somehow these tragedies still manage to occur. One man died after being impaled by a steel beam near Fort Collins. Another worker was caught in an aluminum slitter at a Denver plant. Yet another man was crushed against a train by a forklift at a Colorado factory. This worker was crushed by 4,000 pounds of glass at an Aurora, CO, company, which had a history of repeated violations with the Occupational Safety and Health Administration.

Colorado has attracted a wide variety of manufacturers, from nuclear weapons to dynamite. While there are no longer quite as many errant explosions, manufacturing plants are still dangerous areas that can decimate employees and render them unable to work.

After experiencing a devastating injury, that employee may not be sure how to proceed. He might not even know what kind of lawsuit is available to him. Let’s discuss what remedies are available.

OSHA has the final word over manufacturing plants. They enact regulations intended to protect workers, but injuries and deaths still happen. These are the most common injuries that occur on manufacturing job sites:

OSHA will investigate when someone is injured on a job site and see if the circumstances indicate that the employer was cutting corners or using shoddy practices.

While this might indicate that OSHA is on the worker’s side, it actually does not. OSHA operates as an independent entity and maintains that the employee might also have been contributed to the accident as well.

If a worker isn’t employed as an independent contractor and is hurt while on the job, his claim will most likely be directed through the workers’ compensation system. Colorado made a “comparative fault” insurance structure that helps employees who were hurt in the scope of their employment; therefore, it doesn’t matter who or what injured the worker – he’s still covered by insurance.

However, in Colorado, benefits may be reduced up to 50% if it’s found that the worker contributed in some way to his injury by violating a known safety regulation – for example, drinking on the job or taking drugs. Something like this would need to be hashed out in front of a judge.

Enjuris tip: In Colorado, because of the comparative fault system, workers’ compensation benefits may be reduced by up to 50% if it’s discovered that the worker’s injury was caused by a known violation of a safety regulation. (However, this is in very rare circumstances. Even if a worker contributed to his or her own injury, that person might still be entitled to full benefits.)

However, unless there was an intentional injury on the part of his employer, supervisor or co-workers, he cannot sue any of them for negligence. Additionally, those benefits don’t compensate for vocational rehabilitation or pain and suffering.

However, unless there was an intentional injury on the part of his employer, supervisor or co-workers, he cannot sue any of them for negligence. Additionally, those benefits don’t compensate for vocational rehabilitation or pain and suffering.

The separate case would take the form of a personal injury negligence suit, which would be a traditional case against the worker’s employer, supervisor, co-workers or other parties present at the manufacturing site:

A third party could also be sued for product liability, if there were a defective piece of machinery that caused injuries.

For instance, the aluminum slitter that caused the death of a worker might have had a piece in its rollers and knives that an attorney could look at and say, “That’s a product defect waiting to happen.” It might also be found that the worker contributed to his own death by tripping and falling into the machine. The truth is, we don’t know.

Colorado is slightly different from other states in terms of wrongful death suits. Should the worst happen to a worker, his or her family can bring a suit against the employer – but only within two years, and only according to specific rules. The surviving spouse can file within the first year after the decedent’s death. This restriction is lifted during the second year, and then the decedent’s children are allowed to file a suit as well.

Enjuris tip: Colorado has a two-year statute of limitations for wrongful death suits. See Colorado’s statutes of limitation for other types of cases also.

If there are no spouse and children, the decedent’s parents can file at any time during the two-year period. Additionally, the decedent’s estate representative can file a survival action to recover damages for final injury and illness expenses, as well as funeral expenses, at any time. This action can be brought in tandem with the wrongful death suits that the family brings.

Damages for wrongful death can include the value of lost wages that the decedent would have earned during his or her lifetime; the value of other benefits lost (for example, life insurance or other benefits); loss of love and affection; and sometimes, the family members can attempt to seek punitive damages to punish the defendant.

Untangling all of these threads can be very difficult and heartbreaking. Having the help of an attorney who is well versed in these areas can help with a great deal of this burden. Consider speaking with Enjuris’ Colorado law firm partner.