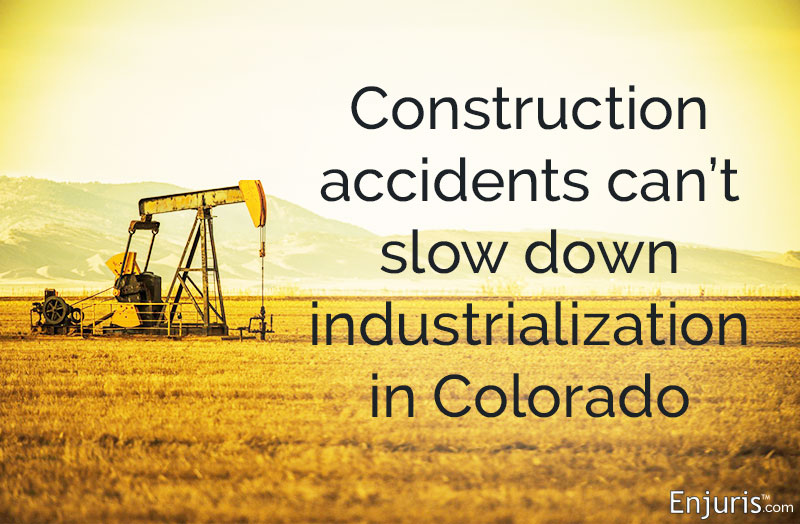 What to do when construction becomes destruction

Colorado is known for far more than its booming tourism industry.

It’s also a hotspot for agriculture, mining and manufacturing. Although manufacturing isn’t in the top three industries, it still brings in a significant portion of the state’s annual revenue.

These are also very, very dangerous professions that result in many accidents every day. How so, you might ask? Let’s take a closer look.

Agriculture: Farmers, much to everyone’s surprise, have one of the most hazardous jobs in the world. Much of it is because of the equipment used – combines, tractors and other slow-moving, unforgiving pieces of machinery. If a piece of clothing gets caught in a combine or a tractor rolls over, there is little to no chance of escape.

Additionally, this is one of the few industries in which family members are also at risk of fatal or nonfatal injuries, simply because they live on the premises.

Among the injuries that farmers can sustain are physical injuries from equipment, amputation, pesticide exposure, pulmonary disease, hearing loss, stress, disc herniations and musculoskeletal disorders. Tractor overturns are still the leading cause of death on farms. However, many die because of motor vehicle accidents or drowning (such as drowning in agricultural waste, for example).

Mining: You might know that miners used to bring canaries down into the mines with them. This was so that if they came across a danger they could not see – methane gas, for example, or carbon monoxide – the canary’s lack of singing or eventual death would alert them and hasten their exit. These days, miners wear emergency air packs. Even these sometimes fail.

Miners have to deal with noxious gases, explosions, cave-ins, floods and fires. They can become trapped underground in pitch blackness, waiting for help that may never come. Sometimes the fires underground never go out – in Centralia, Pennsylvania, for instance, the mines’ underground fires have been burning for more than 50 years.

In Colorado, mining has focused a lot on fracking, or hydraulic fracturing. This is a drilling technique used for extracting oil and natural gas from underground by fracturing rock deep beneath the surface. It is a very touchy subject because environmental activists claim it contaminates the air, poisons drinking water and contributes to greenhouse gases.

Fracking has also been determined to release silica dust, which causes silicosis among miners. Silicosis is a chronic disease that causes inflammation and scarring in the lungs, decreasing their ability to take in oxygen. Silica is also linked to lung cancer, tuberculosis, chronic obstructive pulmonary disease, and kidney and autoimmune disease.

Manufacturing: This is a job in which you create products from raw components. This sounds innocuous, but then you start thinking about what “raw components” might mean, and then the problems start arising. Here are just a few issues that pop up around manufacturing jobs:

What if I get hurt on the job?

If you are hurt on the job in Colorado, you will likely have to deal with the workers’ compensation system. Colorado created a “no fault” insurance system that helps employees injured in the scope of their employment. Therefore, it doesn’t matter who or what injured that employee – the worker is still covered by insurance. However, the worker can’t sue the employer unless there was an intentional injury by that employer.

The employee could, however, sue an independent third party for injuries he or she sustained while working. This could take the form of a personal injury negligence claim or even a product liability claim for a defective piece of machinery that caused harm.

Enjuris tip: Always speak with a workers’ compensation lawyer. Only a skilled attorney will be able to look at the facts and determine whether a third-party claim exists. If you don’t, you could potentially miss out on thousands of dollars in compensation.

Additionally, if the worst happens and a worker dies while on the job, his or her family can bring a wrongful death suit against the employer.

One of the other tradeoffs is that in Colorado, workers’ compensation benefits may be reduced by 50% if a worker’s injury was caused by a knowing violation of a known safety regulation. This would also be the case if the worker was consuming drugs or alcohol at the time of the injury. This would need to be argued in front of a judge in order to be contested.

There are far more types of injuries than the ones listed above, and they can truly be anything because a job site contains endless possibilities for accidents.

Here are a few examples:

The Occupational Health and Safety Administration, as mentioned above, stated that more than half of private sector workers’ deaths were caused by the “Fatal Four”, which are the most common types of injuries: falls, struck by objects, electrocution, and caught in/between. If these were eliminated, 545 lives would be saved on an annual basis.

An industrial or construction accident can change your life in an instant. If you need an attorney and you’re not sure where to begin, visit our Colorado law firm directory!