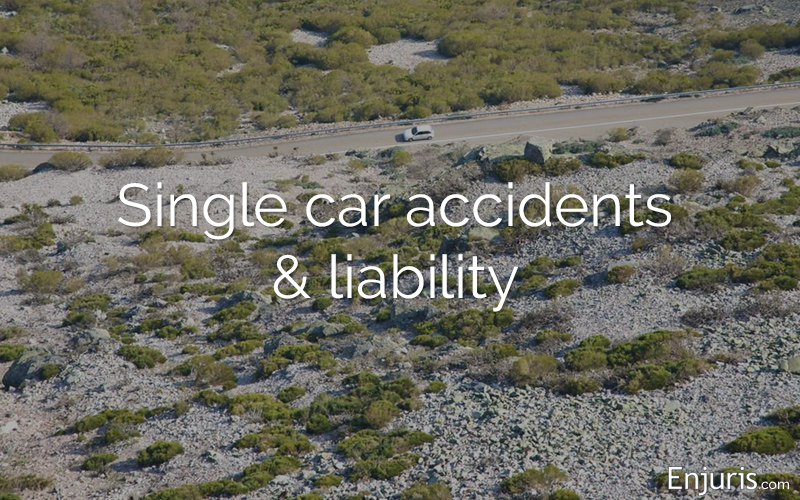 Can you recover damages if you’re the only vehicle involved in a crash?

Table of Contents + show
Can you recover damages if you’re the only vehicle involved in a crash?
Common causes of single-vehicle car accidents
Single-vehicle accident statistics
Can you receive compensation after a car crash if no other vehicles were involved?
Do I need to hire an attorney?
Connect to top-rated lawyers in seconds using our comprehensive national directory
Just because there were no other vehicles involved, doesn’t necessarily mean you can’t receive compensation following a car accident. Learn the common causes of single-vehicle car crashes and find out who can be held liable.

Facing factsRollover rates of SUVs are roughly 3 times those of passenger cars due to their high centers of gravity. Research shows that electronic stability control (ESC) reduces single-vehicle crashes, many of which are rollovers, by roughly 41%.

The National Highway Traffic Safety Administration (NHTSA) looked at 15 years worth of single-vehicle collision data and found that most of the time at least one of the following factors contributed to the crash:

Other factors that commonly contribute to single-vehicle crashes include:

Real Life Example:Tiger Woods was seriously injured in a single-vehicle crash on February 23, 2021, in Ranchos Palos Verdes, California. While the cause of the wreck is not known for sure, speeding seems to have played a role.

On average, there are roughly 6 million car crashes every year in the United States. The NHTSA reviewed crash data from across the country and estimated that approximately 30% of all car crashes are single-vehicle crashes.

Can you receive compensation after a car crash if no other vehicles were involved?

Whether or not you can receive compensation for a car crash in which no other vehicles were involved depends largely on whether the accident was your fault or someone else's fault.

Let’s take a closer look at both scenarios.

Single-vehicle crash that was your fault

Generally speaking, the person who causes a car accident is responsible for paying the damages caused by the car accident. Most single-vehicle crashes are the fault of the party behind the wheel.

Joe was driving his Subaru Forester down Highway 12 in Utah. Because he was texting while driving, he failed to notice a sudden turn in the road and his car left the roadway. Joe’s vehicle was damaged and he suffered minor injuries.

Examples of auto insurance coverage that might pay for your damages in a single-vehicle accident in which you were at fault include:

Enjuris tip:Most states only require liability insurance, which means that you’ll have to purchase optional coverage if you want insurance coverage for the accidents that you cause.

Keep in mind that when a single-vehicle accident is your fault, you (or your insurer) will be responsible for any damages that you cause. In addition to damages to your car and your person, this includes damages to anything you collide with (such as a fence or sign) and even any harm you might cause to a roadway or piece of property.

Single-vehicle crash caused by someone else

The driver of the vehicle that crashes isn’t always responsible for the single-vehicle accident. Other parties who may be responsible include:

Do I need to hire an attorney?

If you’re involved in a single-vehicle crash and you don’t think the crash was your fault, it’s a good idea to sit down with an experienced personal injury attorney. Most initial consultations are free and the attorney will be able to explain your recovery options.

You can find an experienced car accident attorney near you using our free online directory.