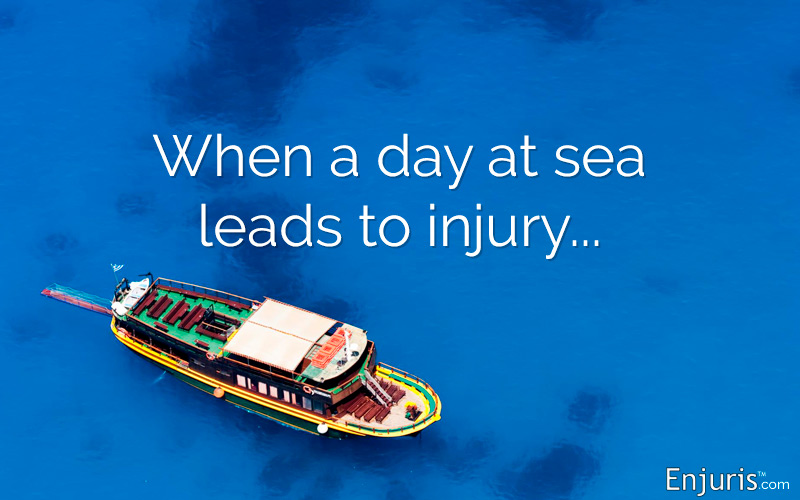 If someone’s negligence caused you to be injured while on a boat, you can file a lawsuit for damages.

The California coastline is 840 miles long. It’s the fifth-longest coastline in the U.S., after Alaska, Florida, Louisiana, and Maine.

The marine and maritime industry draws a lot of Californians, both as recreational boaters and in oceangoing occupations like longshoring, drilling, sailing and others.

According to the National Marine Manufacturers Association, there are over 40,000 jobs associated with recreational boating in California, and boating-related activities and services contribute around $13 billion to the state’s economy.

It’s no surprise that some boaters are more experienced than others, and — like driving a car — operating a boat requires skill, practice, and common sense in order to stay safe.

Every boat operator in California must pass a state-approved boater safety education exam given by the National Association of State Boating Law Administrators. After you’ve passed the test, the California State Parks Division of Boating and Waterways (DBW) issues you a California Boater Card.

Facing factsIn 2015, there were 724 accidents reported involving California recreational boats, and 49 boaters died. There were 232 reported boater injuries that were severe enough to require more than basic first aid treatment.

The requirement for all boaters to have a California Boater Card is being implemented gradually based on the boater’s age. As of January 1, 2019, every boater age 25 or younger is required to have one.

Here’s the schedule for when you’ll need to have a California boater card based on your age:

The best way to prevent a boat accident is to understand why they happen. Here are 10 of the most common reasons why boat accidents occur:

There are other hazards associated with boating that you might not have considered. While less common, they can be equally dangerous.

Every boat operator in California must follow both state and federal laws.

California maritime law prohibits operation of any vessel in a way that’s reckless or negligent, or that endangers life, limb, or property of any person.

A boat operator is also required to drive the boat at a speed that’s reasonable based on traffic, weather, visibility, and the presence of other hazards. You may not endanger swimmers, occupants of your boat, or the occupants of any other boat.

Determining liability in a boating accident

When someone is injured in a car crash, it’s usually because at least one of the drivers (if not both) could’ve done something differently that might have avoided the accident. Boating is different because there are often forces of nature involved — more than you’d typically have during a car crash that’s not weather-related.

If you or a passenger are injured because your boat hits another boat’s wake, is hit by a wave, or hits a submerged object like a rock or land mass, who’s at fault?

In general, you need to establish a party’s negligence in order to recover damages for a boating injury.

But an injury, alone, doesn’t mean that someone was negligent. To be considered negligent, a person must have acted without reasonable care, and that action or failure to act was the cause of the injury.

If you’re injured in a car accident, your first step is probably to try to settle your claim with the negligent driver’s insurance company. In California, though, it’s not required to have insurance for a boat. Therefore, if you’ve been injured by a boat operator’s negligence, the only way to pursue your costs for medical treatment, property damage, or other losses is through the legal system.

Collisions with another boat

If you’ve suffered an injury in a collision with another boat, you’d establish negligence the same way you might after a car accident. If one boat operator is at fault for the collision, they could be found negligent and responsible for paying damages to the injured person.

Enjuris tip: A motorboat operator is more likely to be at fault in a collision between a motorboat and a sailboat because sailboats have the right of way.

Injury caused by another boat’s wake

Boat passengers can be injured when a jolt from a wave or wake knocks them down, throws them out of a seat, or even tosses them overboard. Although boating regulations require that the operator needs to keep a lookout for any hazard, there are other factors like:

If the boat operator failed to consider any of these factors, they could be held negligent. In addition, if the wake was created by another boat, that operator could be negligent if they were operating in a no-wake zone or violating boating safety regulations.

If an injury or accident happens because the boat hits a wave, it’s possible that no one is negligent.

Jurisdiction for a boat accident

If you’re considering a personal injury lawsuit after a boat accident, it’s important to determine which court has jurisdiction (in other words, where to file your lawsuit).

Most personal injury cases begin in state trial courts and only go to federal court if there’s an appeal.

However, Article III of the U.S. Constitution says that the federal court system has original jurisdiction over admiralty and maritime cases. This means your boating accident case would likely first originate in the federal court and doesn’t need to go through the state court. All damages or injuries, including property damage, caused by vessels on the high seas or navigable waters is usually resolved in federal court.

The “high seas” is beyond the jurisdiction of any country, and navigable waters are those in interstate or foreign commerce.

The only scenario where a state court might have jurisdiction in a boating accident is if it’s a personal lawsuit against the owner of a boat.

There are a lot of exceptions and nuances when it comes to boating injury jurisdiction. A personal injury lawyer will be the best person to advise you about where your lawsuit should be filed.

A boat accident can be complicated when it comes to establishing negligence, jurisdiction, and other factors. It might require weather analysts and other expert witnesses to establish what the conditions were at the time of the injury, among other things.