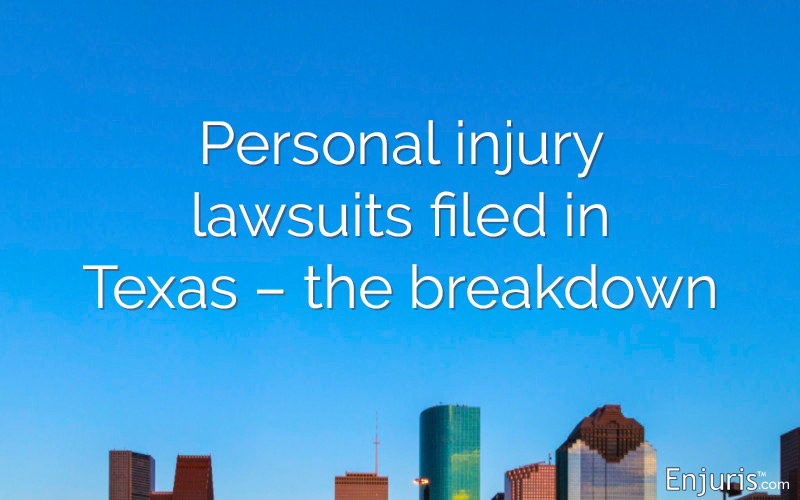 What are the most common personal injury cases in Texas? Let’s look at some examples.

It’s hot in Texas. August alone has an average high of 96 degrees F.

So many people head to one of the nearby rivers, grab their favorite flotation device, and ‘float the river’ for a few hours in the sun.

One of the most popular rivers is the Guadalupe in San Marcos. The water is warm, shallow, and the current is slow…. Perfect for a few hours of relaxation, fun, and cooling off.

Many river floaters enjoy their fun in the water with a beer or wine cooler, which is legal on rivers in Texas.

Unfortunately, some drunk river tubers then head back to their cars and, foolishly, drive home. Sometimes, terrible tragedy results.

That is what happened on Aug. 2, 2016, when a suspected drunk driver slammed into another vehicle on State Highway 21. In the other vehicle were Fabian Guerrero and Kristian Guerrero. They were both 24 and recently married.

Fabian died in the crash. And tragically, the wife also was injured and she lost her unborn son, as well.

The suspected drunk driver is Shana Lee Eliott, 21, and she was seen by witnesses rolling a bottle of alcohol under her vehicle after the crash. Eliott spent a day tubing the Guadalupe and drank alcohol. She has been charged with intoxicated manslaughter. She is awaiting trial.

Whether Guerrero will file a civil lawsuit against Eliott for wrongful death is up to her, but many would say that she should.

Tragic cases such as these are just isolated examples of the thousands of accident cases in Texas every year, of which many become civil lawsuits.

But how many exactly?

How many civil lawsuits are there in Texas?

Texas is a big state with a big population (the second most populous state in the U.S.), and the number of civil lawsuits is big as well.

There were 539,278 civil or administrative lawsuits filed in Texas in 2015. The number of new civil cases filed increased for the first time since 2011.

Also, medical malpractice cases have been increasing steadily since 2012, with 995 cases in 2015.

How does that compare to figures across the U.S.?

The NCSC reports the data below from the most recent large-scale national study of civil caseloads: the 1992 Civil Justice Survey of State Courts. 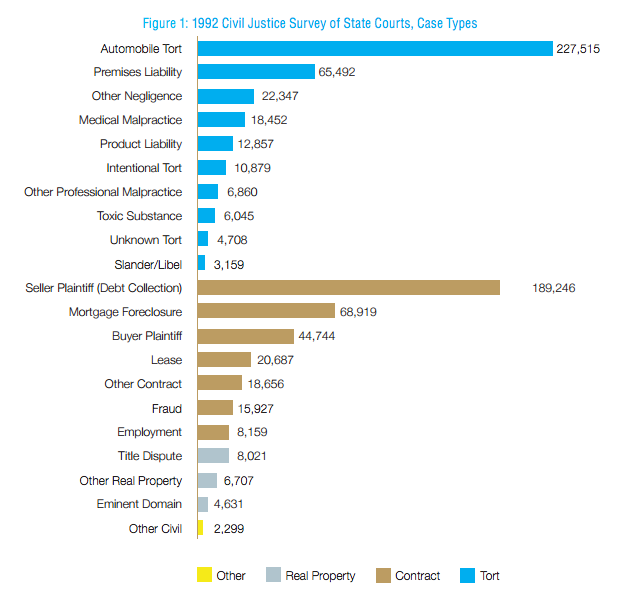 In that study, the NCSC reported:

“Of more than 750,000 civil cases disposed in the 75 most populous counties, it estimated that approximately half (49%) alleged tort claims, 48 percent alleged contract claims, and two percent were real property disputes. Automobile torts were the single largest subcategory of tort cases, accounting for nearly two-thirds (60%) of all tort cases. In contrast, product liability and medical malpractice cases, which generate some of greatest criticisms of the civil justice system, reflected only four percent of total civil cases combined.”

The most common causes of personal injury civil lawsuits in Texas

Drunk driving accidents resulting in injury and death are common in Texas.

There are also many other causes of vehicle accidents – from distracted driving with a cell phone to speeding.

At-fault drivers in Texas are liable for any of the financial losses that the accident victims suffer. Some of these will include medical bills, lost wages, and possibly pain and suffering.

Enjuris tip: The state of Texas has a ‘dram shop law.’ It states that establishments may be held liable for selling alcohol to ‘obviously intoxicated’ persons. The person suing the business must prove the person was ‘obviously intoxicated’ to the point that they were a danger to themselves and others. Learn more in our guide to DWI and Drunk Driving Accidents in Texas.

Healthcare professionals in Texas have an obligation to treat their patients with a reasonable duty of care.

However, physicians and other healthcare workers sometimes make mistakes. They might prescribe the wrong drugs, use excessive anesthetic or make an incorrect diagnosis. A serious error in medical treatment can make existing health problems worse or create new ones that threaten life.

Construction job sites are notorious for being death traps. Construction sites account for more workplace mishaps than any other US industry. Texas construction workers are always risking catastrophic injuries in their daily work. Collapsed scaffolding, exposed electrical wires, and heavy machinery accidents are just a few of the daily hazards.

These accidents happen often in Texas, as anywhere, and they are the leading cause of all spinal cord injuries related to falls. Thousands of Texans are sent to emergency rooms in slip and fall accidents each year.

All business owners are obligated to provide a safe environment for their customers. Texas state law requires them to conduct regular maintenance to avoid these types of serious accident cases. If they do not, they can be liable for damages in a civil lawsuit.

The civil litigation process in Texas

Whether you have been seriously hurt in a devastating car accident by a drunk driver, or you had a loved one die in a construction accident, fortunately, Texas has set up a straightforward civil litigation process for dealing with these types of non-criminal legal matters in court.

In Texas, there are two major options in the civil litigation process. Which way the case goes will depend upon the details of the accident and if fault is clear or not:

This means that both the plaintiff and defendant in the civil lawsuit agree on the outcome but want to use the Texas civil court system to make the agreement binding in the legal sense.

Both sides will be required to have the agreement approved by a judge. Uncontested civil cases often can be done successfully through careful legal research by both parties.

This means that the people involved in the case disagree on the outcome.

Both sides will have to argue their point of view to explain why Texas law says that the judge or jury should rule in their favor. Contested civil cases, such as personal injury cases, will nearly always require you to have an attorney for you to have a good chance of prevailing.

If you or a loved one was hurt or killed in an accident in Texas, you must know this: You have just two years from the date of the injury to file a personal injury or wrongful death lawsuit, according to Tex. Civ. Pract. & Rem. Code, Title 2 section 16.0003.

That time can go by faster than you might think.

The earlier example of tubing and drunk driving illustrates a potential wrongful death civil action. Let’s take a look at some recent examples of successful personal injury lawsuits in Texas.

These outcomes cannot predict what might happen in another case, but at least you can know what has happened in cases that may be similar to yours.

A mother and her sons were violently rear ended by a Sanderson Farms truck. One of the boys was an infant and he suffered terrible brain damage, which will leave him incapacitated for life. At the age of three today, he cannot speak, walk or crawl. The case was settled for $27.5 million.

A family of a demolition worker who fell to his death was awarded $53 million in a wrongful death lawsuit. The contractor was determined to be 25% liable and the Manhattan-Vaughn Construction Company was found to be 75% liable. (See more on Fault in Texas.)

A woman slipped and fell in a parking lot owned by RaceTrac Petroleum, Inc. She claimed that there was oil on the ground. She suffered severe injuries, and the case was settled out of court for an undisclosed amount.

If you have suffered any type of personal injury in Texas that may have been caused by another party, you usually can speak to a personal injury attorney at no cost. It is worth at least discussing the matter in a free consultation. The attorney can give you a good idea if you can possibly recover damages in a civil lawsuit.