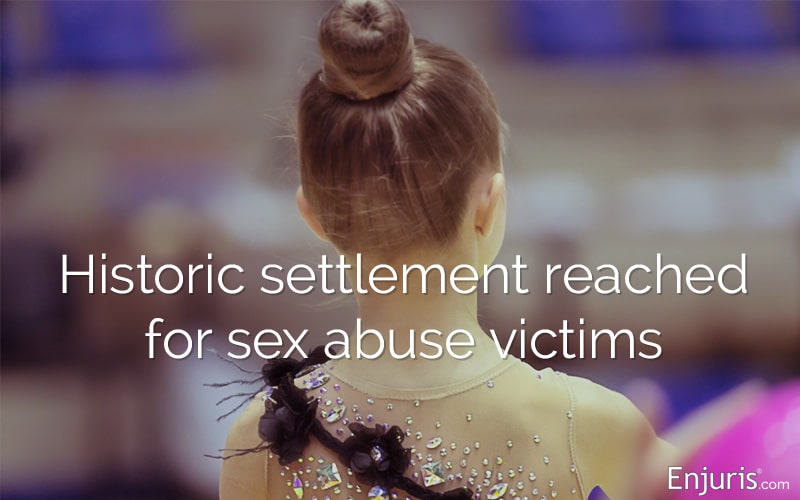 Hundreds of female gymnasts who were sexually abused by Larry Nassar, the former doctor for the United States women’s gymnastics team, reached a $380 million settlement with USA Gymnastics (USAG) and the U.S. Olympic & Paralympic Committee (USOPC) after 5 years of litigation.

Background of the Larry Nassar case

Table of Contents + show
Background of the Larry Nassar case
USAG and USOPC reach a $380 million settlement with abuse victims
Can you sue for sexual abuse?

Larry Nassar worked for decades as a doctor for USAG, Michigan State University (MSU), and several local gyms around Michigan. During his time with these organizations, he sexually abused hundreds of female athletes under the guise of administering medical treatment.

Although countless complaints were made against Larry over the years, officials largely failed to act.

A detailed timeline of Larry Nassar’s career, abuses, and the various lawsuits against him is beyond the scope of this blog post. However, in order to provide context for the $380 million settlement, it’s important to review some of the key events:

USAG and USOPC reach a $380 million settlement with abuse victims

On December 13, 2021, USAG and USOPC reached a settlement agreement with hundreds of student-athletes who joined the 2018 civil lawsuit.

As part of the settlement, USAG and USOPC will pay the survivors $380 million (details regarding how the money will be distributed among the plaintiffs are confidential).

In addition, USAG and USOPC will designate some of their board seats to survivors and implement $5 million worth of new policies aimed at protecting athletes from future abuse.

“This settlement is about the brave survivors who came forward, forced these organizations to listen, and demanded change,” said Michelle Simpson Tuegel, an attorney representing more than 2 dozen of the survivors.

Most of the money to satisfy the settlement will come from the insurers of USAG and the USOPC.

Can you sue for sexual abuse?

A civil lawsuit based on sexual abuse can be brought under a number of different legal theories. In some instances, both the perpetrator and the perpetrator’s employer (or some other entity) can be sued.

If you’ve been the victim of sexual abuse, consider contacting the Rape, Abuse & Incest National Network (RAINN) to get the support you need.