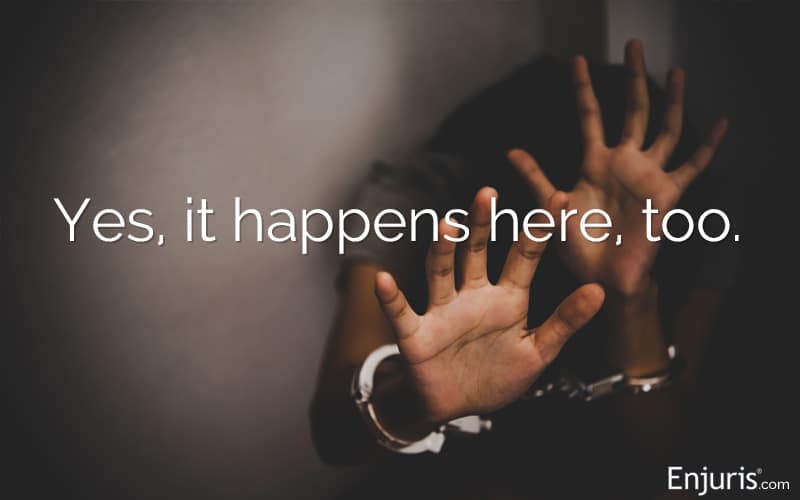 Human trafficking (also known as “modern-day slavery”) may sound like something that happens in the plot of a movie or in far-off parts of the globe, but human trafficking victims know all too well that these crimes occur every day in every region of the United States.

In this article, we’ll take a look at human trafficking, including the legal options that may allow victims to receive financial compensation.

What is human trafficking?

Human trafficking is a crime that involves the use of force, fraud, or coercion to compel a person to provide labor or to engage in commercial sex acts.

The exploitation of a minor for commercial sex constitutes human trafficking, regardless of whether any form of force, fraud, or coercion is used.

Let’s look at both types of human trafficking more closely:

How common is human trafficking?

Across the globe, there are an estimated 24.9 million victims of human trafficking at any given time. Of these, roughly 16 million (64%) were exploited for labor, 4.8 million (19%) were sexually exploited, and 4.1 million (17%) were exploited in state-imposed forced labor.

Facing facts:Although there are almost 25 million victims of human trafficking around the world at any given time, most of these victims go unaccounted for and do not receive justice. The data collected for the 2020 Global Report on Trafficking in Persons shows that in 2018 about 50,000 human trafficking victims were detected and reported by 148 countries.

Human trafficking sounds like something that only occurs in parts of the world far, far away from where you live. Unfortunately, human trafficking in the United States is much more common than you probably think. What’s more, there’s a good chance that a human trafficking crime is taking place right now in your state and community.

Consider the following human trafficking arrest from 2019, but keep in mind that most human traffic crimes go unreported and unprosecuted.

Who are the victims and perpetrators of human trafficking?

Although anyone can become a victim of human trafficking, traffickers typically prey on individuals who are poor, vulnerable, living in unsafe or unstable situations, or in search of a better life.

Victims of trafficking are typically lured into forced labor or sex acts by false promises of love or financial stability.

Just like victims of human trafficking, perpetrators of this unspeakable crime vary. Traffickers can be men or women, foreign nationals or U.S. citizens, family members or complete strangers. What’s more, while some traffickers are gang members or pimps, others have respected jobs, such as diplomats, business owners, and farmers.

What criminal and civil laws are implicated?

Both criminal and civil laws address human trafficking in the United States.

Let’s take a look at the relevant criminal laws first.

Additionally, all 50 states have passed laws that make human trafficking a felony (beginning with Washington in 2003).

Human trafficking is a felony in all 50 states.  Tweet this
Enjuris tip: You can find a chart with every state law and the corresponding penalties for human trafficking in this report on U.S. Human Trafficking Statistics & Laws by State.

But what about civil laws?

You may be able to file a civil lawsuit against an individual who facilitated or benefited from human trafficking if you:

In 2003, congress passed the Trafficking Victims Protection Reauthorization Act, which allows victims of human trafficking to file civil claims in federal court against anyone involved in the “recruitment, harboring, transportation, provision, obtaining, patronizing, or soliciting” of a person for human trafficking.

Facing facts:According to a report published by the Human Trafficking Legal Center, the number of federal civil trafficking cases has risen steadily over the last 15 years. There were more than 6 times as many cases filed in 2017 as in 2004. In the majority of cases, plaintiffs were represented by pro bono counsel at law firms.

Who can victims of human trafficking sue?

Under federal law (and most state laws), human trafficking victims can file a lawsuit against any person or business involved in the recruitment, harboring, transportation, provision, obtaining, patronizing, or soliciting of a person for forced sex or labor.

While it may seem obvious to file a civil lawsuit against traffickers themselves, most traffickers end up in prison without any money or assets. For this reason, many victims end up suing third parties, such as hotels, massage parlors, trucking companies, and taxi companies.

In most cases, human trafficking victims can receive economic, non-economic, and punitive damages in a civil lawsuit:

In addition to the financial compensation, civil lawsuits have the added benefit of discouraging would-be traffickers, empowering other victims, and uncovering other victims or perpetrators through investigation.

The lawsuit alleged that the “cult” was involved in “despicable human trafficking practices” that harmed her. More specifically, the lawsuit alleged that when Kendra was 11 years old she was forced to cook, clean, and provide child care for the United Nations of Islam. What’s more, she was pulled out of school at the age of 16 and sent to Royall’s home where she was forced to work without pay while enduring physical and emotional abuse.

What is the statute of limitations?

The term “statute of limitations” refers to the amount of time a person has to file a lawsuit before the lawsuit is forever barred.

Under the federal Trafficking Victims Protection Reauthorization Act, a victim of human trafficking has 10 years to file a lawsuit from the date of the crime, or 10 years after the victim turns 18 if the crime occurred when the victim was a minor.

Victims of human trafficking must file a civil lawsuit within 10 years from when they were last trafficked, or by age 28 if they were a minor at the time of the crime.  Tweet this

It’s a good idea to get in touch with an attorney as soon as possible to preserve all of your legal options.

Are there other types of sex crimes?

In addition to sex trafficking, there are a host of sex crimes that can give rise to civil lawsuits. These include:

All of these sex crimes have different elements that must be proven and different time limitations depending on the state.

If you or someone you know was a victim of sex trafficking or some other sex crime, you may be entitled to compensation. Contact an experienced attorney today using our free online directory.