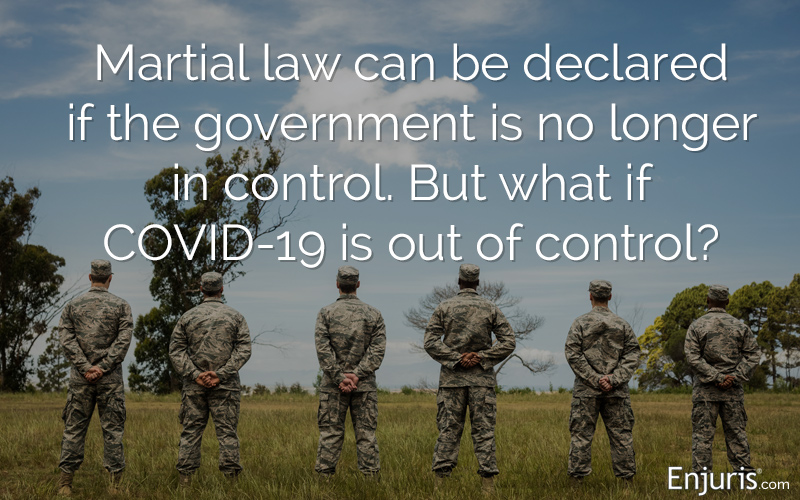 2020 has brought a lot of terms into our everyday vocabularies that most of us likely never even thought about until recently—terms like quarantine, contact tracing, lockdowns, and Zoom meetings. The COVID-19 pandemic has forced many of us to consider concepts and lifestyles that are completely unfamiliar (and that would’ve been unfathomable even this time last year).

One related concept that you might be thinking or hearing about a lot these days is martial law. If the U.S. were to impose martial law, it would mean that residents would be under military authority during a temporary time of crisis because civil rule has failed.

Historically, imposing martial law is rare in the U.S. and has only happened in times of war, natural disasters, or civil unrest. The consequence of martial law is that people can lose some civil liberties, such as freedom of movement.

Table of Contents + show
Historically, imposing martial law is rare in the U.S. and has only happened in times of war, natural disasters, or civil unrest. The consequence of martial law is that people can lose some civil liberties, such as freedom of movement.
When has martial law been declared in the U.S.?
COVID-19 and martial law
How would martial law affect your city or community?
Do emergency orders related to COVID-19 affect personal freedoms?
Stay-at-home orders vs. martial law
Injuries while under martial law
How to sue the military

You might be surprised to learn that martial law has been declared more than 68 times in U.S. history, and it can be declared by the president, Congress, or a governor or mayor as long as the declaration is constitutional.

Martial law has been declared more than 68 times in American history.  Tweet this

Although 2020 has been a contentious year politically in the U.S., the biggest concern about martial law at present is not about political civil unrest, but rather about a medical martial law declaration to slow the spread of COVID-19.

When has martial law been declared in the U.S.?

Throughout the 20th century, martial law was declared for natural disasters, labor disputes, rioting and civil unrest, war (Pearl Harbor invasion during World War II), and other types of disputes and strikes. In each of these situations, martial law was declared by a state governor or military general, and once by Mayor Walter C. Jones following the Great Galveston Hurricane in Texas in 1900.1

The purpose of martial law is to allow the military to:

There has never been a declaration of martial law because of a public health emergency... but is it possible?

Depending on where you live, you might have experienced a stay-at-home order or shutdown over the past year because of COVID-19. However, these types of orders are not the same as martial law.

An executive order can be issued by a governor or the president in order to require people to follow certain rules. In some states or regions, executive orders have been issued that include:

If a state or region were to enact martial law, you might see military installations become responsible for operating some government facilities, acting similar to police officers with respect to enforcing pandemic-related rules, and preventing people from acting recklessly or negligently.

In addition to keeping order, the military has the capacity to build and open additional hospital beds if necessary. For example, at the beginning of the pandemic, New York’s governor requested the assistance of the Army Corps of Engineers to convert existing military bases and other facilities to serve as temporary medical centers.

An emergency is a situation that requires quick action in order to prevent or help a dangerous situation. If an emergency exceeds local resources or requires the use of extraordinary powers, there can be a proclamation or declaration of emergency in order to address the public’s needs at that time.2

In other words, a state or federal government has the authority to declare martial law if the spread of COVID-19 becomes so uncontrolled that local authorities can’t maintain safety in their communities. 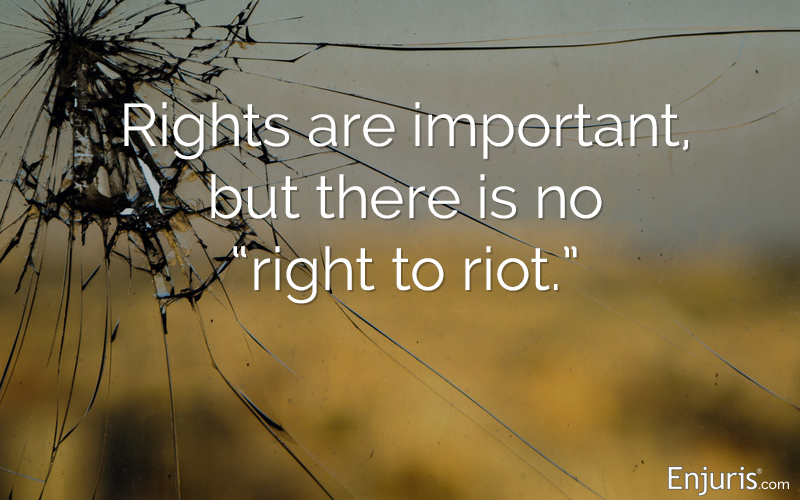 A Riot Left You With Property Damage. What Now?

Does your insurance cover damage to your home or business because of rioting? If not, how can you recover costs for repair or replacement of your property?

How would martial law affect your city or community?

Remember, the purpose of martial law is to keep people safe when the regular local government isn’t able to do so. That means a pandemic-related martial law declaration in your area could involve bringing in the military to:

Around the globe, emergency orders have been enacted that prohibit gatherings based on the number of people, enforced curfews, and established lockdowns, among other restrictions.

In Argentina, the Ministry of Security established “cyber patrols” of social media that would monitor speech and sharing on social media in order to restrict misinformation about the coronavirus. About a dozen criminal cases have been filed for public intimidation based on these social media patrols.

In the Philippines, the police are authorized to enter people’s homes to search for individuals who have COVID-19. Under this plan, the police are permitted to take a COVID-19 positive person from their home to a private quarantine facility if their home isn’t equipped with adequate protection against infecting others in their household.

In the U.S., we enjoy different types of freedom from government interference during non-emergency times and, at this time, that hasn’t changed. Some states and regions have been under stay-at-home orders or “lockdowns,” and there are executive orders that require people to wear face coverings in public places in some states, but we’ve not seen people removed from their homes or being tracked by mobile phone apps without their consent.

A stay-at-home order can be issued by a state or local government in an emergency. It’s a way to react efficiently and effectively to the pandemic, but it’s not martial law.

While the state and local governments are using the powers available to them to respond to the pandemic, they’re still able to use civil authority to do so. Martial law can only be declared where civil authority is unable to function effectively.

Enjuris tip:How is martial law defined? Well... martial law actually isn’t mentioned in the U.S. Constitution, and it has never been defined by Congress.

The U.S. Supreme Court has decided that there are certain conditions that are necessary for a declaration of martial law. Among them is that martial law should only be declared if there is no power left except the military.

In other words, martial law should be the last resort and can only happen if there is no court system... that is, if the civil and criminal courts are closed.

Injuries while under martial law

If you are living under martial law and you become injured, who’s responsible for your damages?

Even though life would look a lot different if martial law were enacted, accidents and injuries would still happen.

If you were injured because of someone’s negligence while living under martial law, you would still be entitled to recover damages for your costs for medical treatment, lost wages, property loss, and other expenses.

You would file a claim against the military similarly to how you’d file an insurance claim. The statute of limitations for federal claims such as this is usually 2 years from the date of the accident or injury—meaning you have 2 years in which to file your claim or it will be denied.

Depending on the circumstances, you could suffer any type of injury, but these are the most typical lawsuits by civilians against the military:

How to sue the military

Since the military is part of the federal government, any lawsuit needs to be filed in federal court. However, before you do that, you need to exhaust administrative remedies.

Here’s how you begin to make a claim against the military:

These are complicated lawsuits because the federal government is a complex agency. And while negligence, itself, can be straightforward, determining who is liable and for what can often be difficult.

If you’re injured while under martial law or by a member of the military, you should seek the advice of a personal injury lawyer who can advise you of your rights and help you receive compensation.