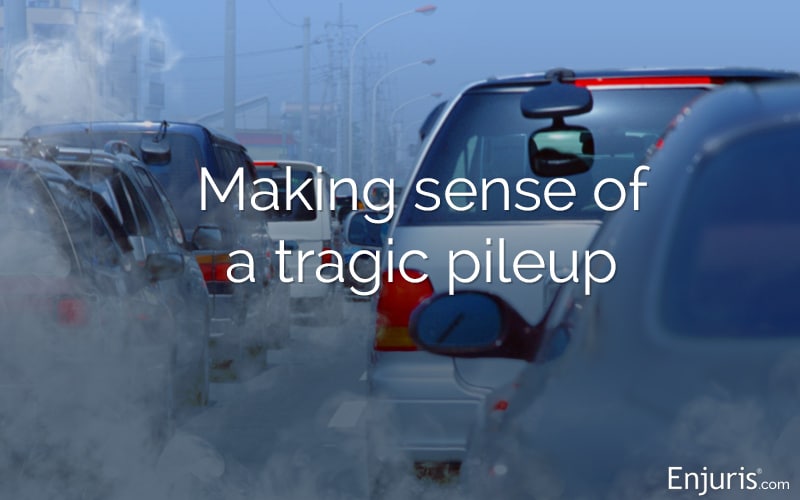 A 130-car pileup that stretched over a half-mile of ice-covered highway left 6 people dead and dozens injured in Fort Worth, Texas.

The pileup occurred as overnight freezing rain and sleet caused dangerous driving conditions on Interstate 35 during the height of the morning commute on February 11, 2021.

“The scene we saw today is really one unlike probably any of us have ever seen and we pray to God we never see again,” said Fort Worth Police Chief Neil Noakes.

One driver who barely avoided the crash reported that “it was literally like stepping on an ice rink,” when he exited his vehicle on the highway.

Though it’s unclear exactly how the accident started, videos posted to social media show semi-trailers and cars sliding into each other, some of them flying through the air and landing on top of other vehicles.

“It appears at this point in the investigation, which is still very preliminary, that ice was a factor,” Noakes said.

Who’s at fault when bad weather causes an accident?

Table of Contents + show
Who’s at fault when bad weather causes an accident?
What makes a multi-car pileup more complicated than other car accidents?
Getting help

Although it may seem unfair, the person who causes an accident in poor weather conditions is responsible for the resulting damages even if poor weather was a significant contributing factor.

For example, if you’re driving along a road and hit a patch of ice that causes you to slide into the adjacent lane and strike a vehicle, you’re responsible for the damages even though you’d probably like to blame the ice.

What makes a multi-car pileup more complicated than other car accidents?

If you’re injured in a multi-car pileup and you want to file a lawsuit or an insurance claim, first you’re going to have to prove liability using the legal theory of negligence.

There is a general rule of the road that will guide your determination of who’s at fault. Drivers are required to keep a safe distance between their car and the car in front of them. The distance should be sufficient so that the rear driver can stop safely even if the driver in front of them stops suddenly in inclement weather. For that reason, a car that rear-ends another car is almost always at fault.

Adam is injured in the accident and wants to file a lawsuit.

Who’s liable? Who should he sue?

Generally, in this scenario, Cathy would be liable because she was following too closely behind Bob and caused him to crash into Adam. Dennis may also be partially liable if hitting Cathy caused further damage to Adam. Both Cathy and Dennis might consider arguing that Adam was partially responsible for the accident for driving too fast for the icy conditions.

Notably, Cathy can also sue Dennis for damages he may have caused to her when he rear-ended her. Bob is the only party in this scenario who is not liable for any damages.

Now, you can imagine how complicated determining fault is in the case of a 130-car pileup. Lawyers have to untangle the mess by deposing all the drivers, talking to witnesses, reviewing security footage, and hiring crash reconstruction experts.

In most states, insurance claims are filed against the party responsible for the accident. Practically speaking, you probably won’t have any idea who’s responsible immediately after a multi-car pileup. For this reason, it’s usually best to file a claim with your own insurance company. Your insurance company will then conduct an investigation to determine who’s liable.

Have you been involved in a multi-car pileup? Share your story below.