Accident Help (Home) » Injury Blog » Can You File a Defamation Lawsuit After Being Accused of a Crime? 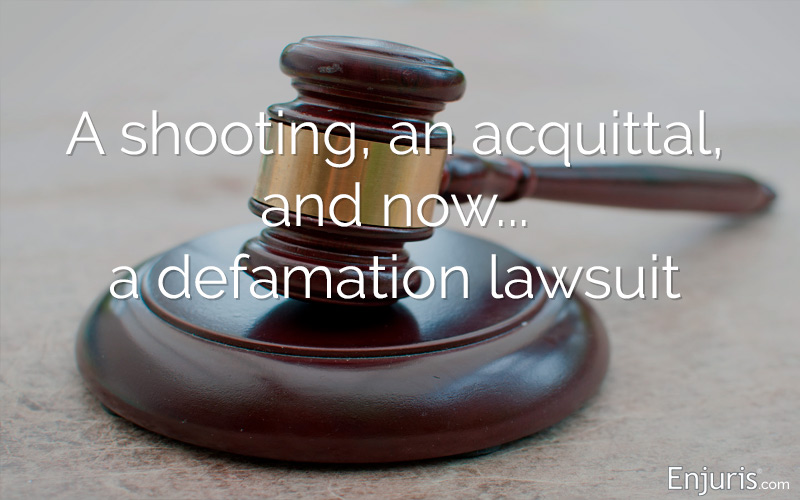 Some incidents leave an indelible mark on our consciousness because of what happened, how they happened, and the people involved.

One case that’s been widely reported and followed across the nation is the shooting of Trayvon Martin in 2012.

Recap of the Trayvon Martin case

Table of Contents + show
Recap of the Trayvon Martin case
Zimmerman files a civil lawsuit for defamation
What is defamation?
Filing a civil defamation claim resulting from a criminal charge
Defamation, malicious prosecution and the George Zimmerman case

Trayvon Martin was a 17-year-old African-American student who lived in Miami Gardens, Florida. One February evening, Trayvon was visiting relatives who lived in The Retreat at Twin Lakes, a gated residential community in the town of Sanford. He had taken a walk outside the neighborhood to a nearby convenience store. Upon his return, he encountered George Zimmerman, who was a Twin Lakes resident.

Since September of the prior year, there had been an uptick in crime in and around Twin Lakes, and Zimmerman coordinated a neighborhood watch program in an effort to curb crimes like attempted break-ins, thefts, and others.

On the night in question, Zimmerman was in his car running an errand. He saw Martin walking in the community and made a call to the Sanford police because he thought Martin appeared “suspicious.” Following that phone call, the two encountered one another and Zimmerman fatally shot Martin.

Only George Zimmerman knows what really happened that night, although there were eyewitnesses to the events immediately before and after the shooting.

There was intense media scrutiny because of allegations that the shooting was racially motivated. On April 11, 2012, Zimmerman was charged with second-degree murder of Trayvon Martin. Three months later, a jury found that Zimmerman acted in self-defense and he was acquitted (found not guilty) for Martin’s death.

In a strange turn of events, Zimmerman filed a civil lawsuit for $100 million against Trayvon Martin’s family, prosecutors, and other people involved in the case. He accuses the defendants of defamation and claims that a witness was coached to provide false statements at trial in order to incriminate him.

Is Zimmerman likely to be successful in a defamation case?

This is a difficult question to answer without knowing the details of the case. However, to better understand the laws underlying this case, let’s investigate defamation law.

Libel, slander, and defamation are causes of action in a personal injury lawsuit.

“Defamation of character” describes any statement that harms someone’s reputation. There are 5 elements to a defamation lawsuit:

Filing a civil defamation claim resulting from a criminal charge

When a person is falsely accused or wrongfully prosecuted for a crime, they could file a civil claim for defamation of character, malicious prosecution, or false imprisonment.

You have to be exonerated in order to file a claim. A civil claim is only available to you if you’ve been cleared in the criminal justice system.

A person doesn’t need to be charged with a crime in order to file a defamation lawsuit; it’s enough to have been accused of a crime if it harms their reputation.

Rolling Stone magazine published a lengthy article in 2014 that described an incident in which a female student alleged that she’d been gang raped by members of the Phi Kappa Psi fraternity at a party at the University of Virginia.

The students alleged to be involved in the incident were not criminally charged because the young woman never filed a police report and the police didn’t have evidence to support her claims.

After the article was published, it was established that the young woman’s accusations against the fraternity members were likely false. Although Rolling Stone retracted the story several months after its initial publication, the damage to the young men’s reputation had already been done.

Malicious prosecution is the cause of action when a case (civil or criminal) is filed without an adequate basis and for the purpose of harassing the defendant, ruining someone’s reputation, or blaming someone who the defendant knows didn’t commit the crime.

What is probable cause?

Probable cause exists when a law enforcement officer or prosecutor has reasonable grounds for legal action. It’s required by the Fourth Amendment of the U.S. Constitution.

In other words, there has to be a reason for an arrest, obtain a warrant, or search your property.

For example, if a police officer observes you driving a car in a reckless way (such as swerving all over the road, failing to stop at a traffic signal, or operating your vehicle in an otherwise erratic manner), they have probable cause to pull you over and administer sobriety testing.

However, there isn’t a specific set of elements or standards that define probable cause because it’s based on the facts and circumstances of each incident. The Supreme Court has determined that probable cause must be flexible, and it follows a standard based on the “factual and practical considerations of everyday life… [for a reasonable person].” (Illinois v. Gates)

Malicious prosecution is different from defamation. A person can file a malicious prosecution claim if they feel they were wrongly arrested or subject to legal action. Defamation, on the other hand, has to do with what was said or written about them (in this instance, with respect to their having being charged with a crime).

One thing to remember about the Zimmerman case is this:

George Zimmerman was acquitted because he made a successful argument that he acted in self-defense — not that he was found innocent because of insufficient proof that he killed Trayvon Martin.

Zimmerman has filed a lawsuit against multiple defendants, including Trayvon Martin’s parents, their family’s attorney, prosecutors, and a book publisher. Zimmerman alleges there was witness fraud during his trial. Specifically, the lawsuit refers to a young woman who was on the phone with Martin during the encounter. Zimmerman claims that the woman who testified at trial was not actually the person on the phone; he says the person on the call was actually her half-sister, and that the witness was “coached” on how to answer questions.

Zimmerman’s defamation claim includes allegations of a “conspiracy” against him, but the defendants have publicly said that the lawsuit is “unfounded and reckless.”

For Zimmerman to recover damages for defamation, he’ll need to prove each of the necessary elements listed above. In this complicated situation, it’s clear that statements were made and published, and there’s likely clear evidence of harm to his reputation.

However, Zimmerman will need to show that the allegedly defamatory content spoken and published in the book was untrue in order to be successful.

If you think you’ve been injured as a result of defamation, please feel free to use the Enjuris Personal Injury Lawyer directory to find an attorney who can advise of your best course of action.