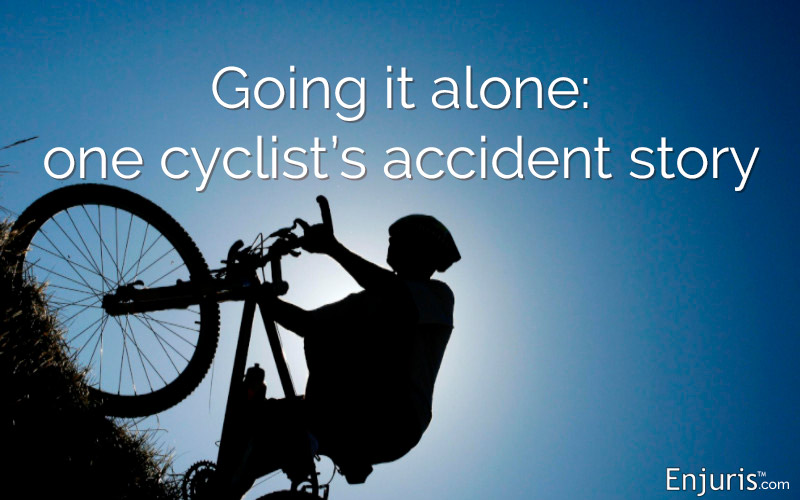 In a bike accident, it’s possible you will suffer serious injuries, like Rodrigo’s brain injury. Or it may be just a smattering of injuries and a major hassle, as it was for Ray Maker, also known as DC Rainmaker.

Regardless if you think you are ‘ok’ or not, you should get to the emergency room immediately. You could be hurt and not know it.

And sometimes, the doctor who sees you won’t catch the injury. You have to advocate for yourself. Ray tells of how went to the ER immediately, and the doctors handed him a bottle of Advil and sent him on his way.

Two weeks later, he was still having severe pain in his leg. An MRI was done, and lo behold, he had micro-fractures in his femur. He strongly advises bike accident victims to speak up if they feel their injuries are not being addressed.

It’s important to keep track of every medical visit after the bike accident, and to note the times of each. This can be super important for getting the insurance company to reimburse you for lost work time.

There are plenty of other benefits to maintaining a post-accident journal.

Many people throw all their receipts into an envelope for their attorney. Ray, who didn’t hire an attorney, kept himself organized very nicely in a spreadsheet.

See when you need an attorney and when you don’t.

Hold your ground with insurance companies

You may have to fight both to get them to cover your bills. Or, tell the medical providers to wait until they get reimbursed from the at-fault driver’s insurance policy.

Learn about other options for covering medical expenses after an accident.

Check out our complete guide to your case after a bicycle accident.