Legal options when a dog bites and injures someone

Table of Contents + show
Legal options when a dog bites and injures someone
Colorado’s dog bite law
Criminal penalties in Colorado for dog bites
Are there any defenses in a dog bite claim?
How do dog bite claims get paid?
What should I do if I have been bitten or if my dog bit someone? 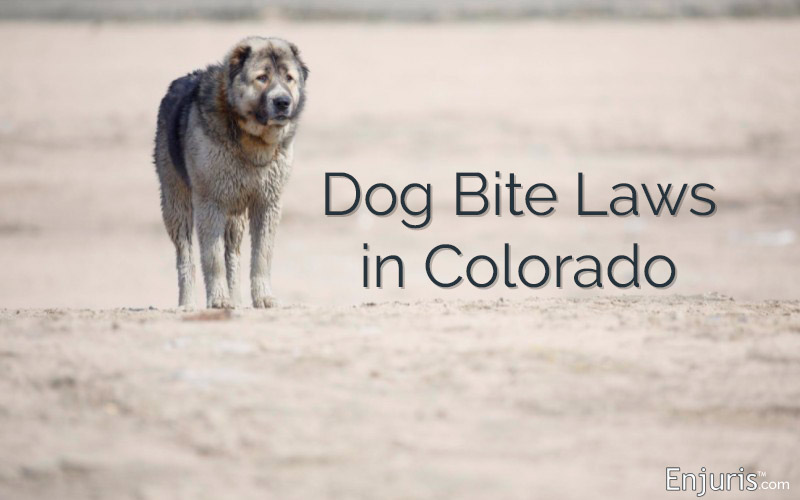 If you own a dog, you know there is always that little dance that happens when your dog meets another dog. They sniff, they bark, they try to play – sometimes they get a little scared. Something that always lurks in the back of your mind is the unfortunate reality of what might happen if your beloved pooch bites that dog – or its owner. Or you’re bit by the other dog. It’s something you never want to consider, because most people just love dogs.

Depending on where you live, state laws can affect the outcome of your case. There are various laws related to dog ownership and liability for dog bites, and there are also some defenses that a dog owner can raise in response to a lawsuit.

Since we’re in Colorado, let’s take a look at that particular statute.

Colorado Revised Statute 13-21-124 covers dog bites and states that a dog’s owner (not a walker or handler, mind you – just the owner) may be held responsible for any injuries if:

After a dog bite, the owner usually says, “My dog isn’t aggressive! He’d never hurt anyone!” Well, tell that to the letter carriers in Denver, where it ranks as one of the worst cities for dog attacks.

It also does not matter if the owner took reasonable care to restrain the dog, like keeping it leashed or behind a fence. All that matters is whether someone was bitten, and how badly. This means it is a “strict liability” statute, not a “negligence” statute – i.e., intent has nothing to do with it. You don’t need to prove that the dog had vicious tendencies or had a propensity to bite. The dog bit someone – end of story.

Note that it says “bitten,” not just “injured.” Some dogs are quite large and can cause a significant injury without even biting. Colorado’s statute specifically applies to dog bites, so if a dog attacks a person by charging her like a bull at a rodeo, but does not bite her, that person would likely not have a claim. That individual might have a claim for negligence instead, but not a claim under the dog bite statute.

Either way, these claims would both fall under the personal injury umbrella, so the plaintiff would have two years from the date of injury to file a claim.

The plaintiff could try arguing “negligence per se.” This is if someone fails to follow a law or ordinance clearly intended to prevent harm, like a speed limit or a traffic code. An example here would be a standard leash law meant to keep dogs from biting others while walking in a park. If a dog wasn’t on a leash when it attacked someone, the dog’s owner would be found negligent of violating the leash law.

Of course, there is always a “however” in these sorts of situations. In Colorado, there is the ability for the plaintiff to argue that the dog had a propensity to bite, and therefore the owner “knew or should have known” that the dog was dangerous – in which case, the plaintiff can attempt to recover full damages. This was discussed in the Colorado Supreme Court case Barger v. Jimerson, and the Court stated that:

"There is no evidence in this case that the dog in question had ever bitten anyone before, but its ferocious and violent nature as daily exhibited to many people, especially the neighbors, was such as to put prudent people on guard to prevent a possibility of attack on human beings.... Moreover, the fact that defendants kept the dog confined is persuasive in concluding that they considered it unsafe for the dog to be at large." (130 Colo. at p. 463.)

If a dog bite is bad enough, an owner might end up facing criminal charges as well as civil penalties. This is when that animal is found to be a “dangerous dog,” which has:

You, as the owner, commit a crime under C.R.S. 18-9-202.5 if you are the owner of a dangerous dog. If the animal causes injury, you might face a misdemeanor. If the dog causes death, that will be raised to a felony. You will also have to register and retrain the dog – if retraining is impossible, the animal might have to be euthanized.

Consequences for the owner can include fines, jail time, restitution and more.

Are there any defenses in a dog bite claim?

There are several defenses against a Colorado dog bite claim, such as:

How do dog bite claims get paid?

If you are a victim of a dog bite, it is incredibly important to acquire as much information about the owner of the animal as possible. This is like a car accident, so if necessary, make sure to call animal control to get a handle on the situation. At the very least take a picture of the dog owner's driver's license.

Consider that most dog bites do not happen at houses; they happen on trails or at parks. If you do not have information about the owner, you will not be able to pursue a legal case.

For those who own dogs, make sure to talk to your insurance agent about your animal. Lots of insurance companies refuse to cover certain breeds (pit bulls, unfortunately, are among those likely not to be covered, along with Dobermans, Rottweilers, and sometimes even Saint Bernards, Newfoundlands, and Huskies). You might think you are covered only to find out later that you are not. When that happens, the injured party will pursue an action against you personally.

What should I do if I have been bitten or if my dog bit someone?

Consider speaking with an experienced personal injury attorney who understands these laws. You can tell me more about your dog bite case here.