Table of Contents + show
There could be a variety of factors that affect liability and compensation for your LA bike crash injury
California bike laws
Common types of bicycle accidents
Liability for a Los Angeles bike accident injury
Need a lawyer?
There’s nothing better than a carefree bike ride on a beautiful day (and LA has plenty of those). But if you’re injured, you should know what to do and where to turn for help.

If you’re an avid or recreational bicyclist, you might view any city where you’d consider living or visiting through the lens of what it would be like to ride a bike there.

The LA Department of Transportation reports that more than 700 miles of bikeways have been added in the city since 2010, increasing bike lane miles to 6,500 throughout. Still, critics contend that LA can be difficult and dangerous for bicyclists. (source)

2013: Entertainment lawyer Milton Olin was riding his bicycle when he was hit by a Los Angeles county sheriff’s deputy, who was texting at the time of the accident. The family was awarded an  $11.75 million settlement from the county.

2017: Not all bicycle accidents are collisions with cars. A cyclist was left quadriplegic after he crashed because the pavement had buckled because of tree roots. He recovered a settlement of $7.5 million for his injuries. In that same year, a cyclist recovered $6.5 million from the city for a traumatic brain injury he suffered from hitting a large pothole and another family recovered $4.5 million after a rider was killed as a result of an accident in which he hit a 2-inch ridge in the pavement.

Despite efforts by city officials to increase the safety of LA streets for bicyclists, programs that aim to raise awareness of bicyclists and their well-being, and the popularity of bicycling trending upward in recent years, accidents continue to happen. If you intend to ride a bicycle in LA, it’s important to know your rights and responsibilities—and what to do if you become injured.

This might seem self-explanatory, but it bears mentioning anyway. When you’re riding a bicycle, you have the same obligations as a motorist. You must follow all traffic laws, be aware of pedestrians and other cyclists, and generally obey the same traffic rules you would if you were driving a car.

2. You must ride in the same direction as the traffic.

A cyclist is not required to use a protected bike lane where one is available, but you must ride in the same direction as traffic. The exceptions are if you’re making a legal left turn or if the right side of the road is closed because of construction or other obstruction.

You are permitted to take the lane if the road is too narrow to ride safely alongside vehicle traffic. Otherwise, you should stay as close to the right edge of the road as possible.

3. You may not stop on a designated bike path.

A bicyclist is not permitted to obstruct a bike path or park their bicycle in that spot.

Although a pedestrian is expected to cross only at marked crosswalks, a bicyclist has an obligation to be aware of pedestrians and be sure to take their safety into consideration.

A bicyclist may only use an ear bud, AirPod, or other device in one ear while riding, leaving the other ear “open” to hear traffic, sirens, or other important sounds.

A bicyclist is not permitted to ride on sidewalks in LA county. This is permitted in other municipalities in California.

A bicyclist is not permitted to ride while under the influence of alcohol or drugs.

A bicyclist may not carry any object that is large or unwieldy that prevents them from using at least one hand on the handlebars.

A motorized bicycle is not permitted on bike trails or in designated bike paths or lanes.

The National Highway Traffic Safety Administration (NHTSA) says that the highest percentage of reported bicycle accident injuries are riders who are hit by a car.

The next-highest percentage is people who fell off their bikes.

Accidents also happen when roads are in poor condition and when riders collide with a stationary object. There are some instances of riders being injured by collisions with dogs who run out in front of them.

When Do You NOT Need an Attorney After an Accident? 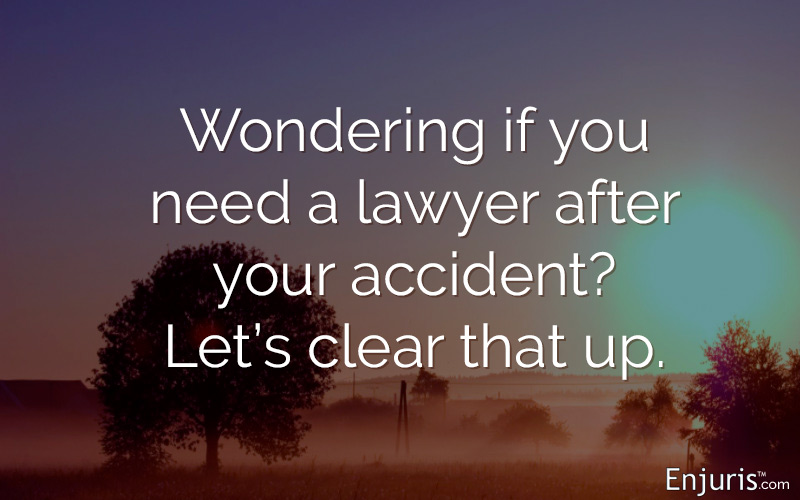 There are definitely situations where you'd want an attorney to be involved, but there are also times when obtaining counsel is simply overkill.

Let's take a look at some of the cases where you may NOT need to hire an attorney after an accident.

There are three most likely scenarios for how you could be injured as a Los Angeles bicyclist, and how the accident happened would inform whether you can recover damages.

Personal injury law hinges on the concept that a plaintiff (the injured person) can recover financially from someone whose negligence caused their injury.

Depending on the type of accident, this could produce a variety of potential defendants. For instance, if you were injured because you fell off your bike after hitting an unreasonably large pothole that should have been fixed, you might have a lawsuit against the city (or whatever municipal agency was in charge of maintaining that road). The same might be true if the injury happened because of negligent placement of traffic signals or signs, or something else that is a property- or road-related hazard.

These kinds of injuries would fall under the category of personal injury law known as premises liability. Your lawyer would determine what agency or individual is responsible for maintaining the road or property where you were injured, and if the accident was the result of faulty maintenance or similar hazard. It’s important to note that lawsuits against a government agency are procedurally different from lawsuits against private people or businesses. There could be shorter deadlines and additional paperwork and notice that needs to be filed. If your injury is related to a property hazard on a public roadway, you should consult a California lawyer immediately so they can guide you through the process.

If your injury was caused by a collision with a car, truck, bus, or other motor vehicle, you should be able to receive damages (financial compensation for your costs) if the driver was at fault for the crash.

Your first move is usually to pursue a settlement with the at-fault person’s insurance company. And, sometimes that’s a smooth process and you’re able to get the damages you need with just a few phone calls and no hassle.

But realistically, this is often easier said than done.

California is a pure comparative negligence state. A plaintiff’s compensation would be reduced by the percentage to which they are at fault, even if they didn’t cause the accident. So, for instance, if you’re a bicyclist who was injured by being hit by a speeding car, the driver’s insurance company might look for reasons why you contributed to the accident, too. Perhaps the driver clearly caused the crash because they were speeding but you were wearing AirPods in both ears at the time—the insurance company (and the courts) could reduce your damage amount if they find that if you’d only worn one AirPod, you would have been more likely to hear the speeding vehicle approach and might have been able to swerve out of the way and avoid being hit.

Your lawyer has several roles

Remember this: The insurance company (even if it’s your own) isn’t always on your side. An insurance company makes money when it pays out less in benefits than it receives in premium payments—so it’s always going to settle for the least amount of money that you’re willing to accept.

On the other hand, your lawyer only makes money if you do. If you win, they win. The insurance company’s job is to settle the claim and make it “go away.” The lawyer’s job is to help you to receive the amount of money you need to cover your losses.

You need a competent, experienced Los Angeles bicycle accident lawyer to ensure that you receive every penny you deserve to move forward from your accident and your injuries.

MVP Accident Attorneys
We are the MVP's of California personal injury
Serving Irvine and the state of California
(949) 942-1050 Free consult
Specialty: car accident and wrongful death
Browse other California Personal Injury lawyers in our national directory