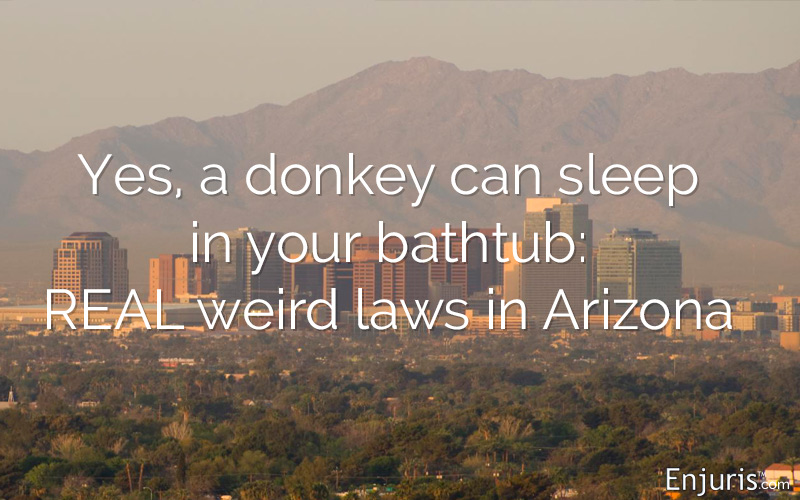 It’s the heart of the Wild West. Home to the Grand Canyon. The red rocks of Sedona. Tombstone and the O.K. Corral.

But Arizona can be... quirky... especially when it comes to its laws.

Let’s take a trip through the Arizona statutes to find some that are pretty unusual.

The following are some interesting and unusual Arizona laws cited in the Arizona Revised Statutes (except for a few that are local laws in a specific municipality):

Have you heard that it’s illegal to sing while wearing a bathing suit in Arizona? Or that women can’t wear pants in Tucson? Or (our favorite) that you’re prohibited from allowing a donkey to sleep in your bathtub?

In this situation, the myths are definitely stranger than reality. There are lots of online sites that claim to list weird Arizona laws, but it turns out that many of those are only fiction.

Here are some head-scratchers that people say are strange Arizona laws, but actually are NOT:

If you’ve learned one thing today, maybe it can be that you shouldn’t believe everything you hear or read. Every state has some unusual legislation in its code and you can find it if you’re willing to dig a little. Arizona is no different and it’s part of what makes us unique.

After all, we’re the only state that has official neckwear!

Have you heard of any other weird or unusual Arizona laws?

The team at the Law Offices of Robert E. Wisniewski is experienced in dealing with workers’ compensation claims and its lawyers are Certified Specialists in Workers’ Compensation through the Arizona State Bar. Contact us today for a free initial consultation if you believe that you’re entitled to workers’ compensation benefits for a car accident or other work-related injury. View our profile and visit our website today.