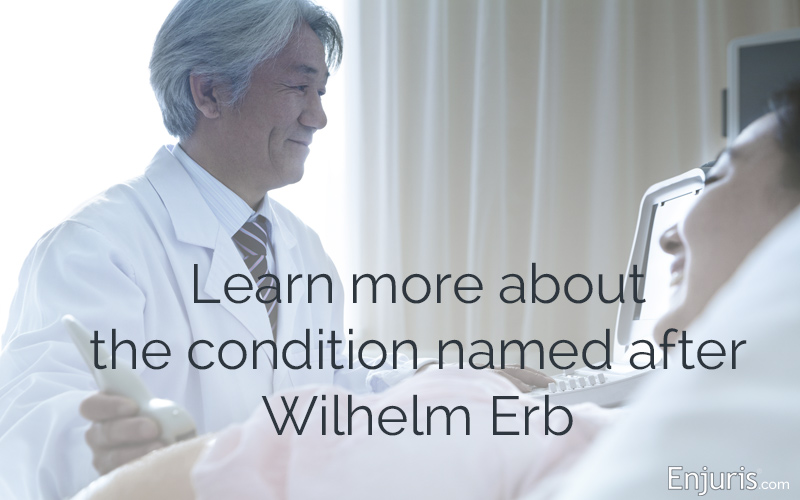 Can I file a lawsuit if my child is born with Erb’s palsy?

During labor and delivery, parents often assume (and hope) their newborn will enter the world loud and moving healthily in every direction.

Erb’s palsy can be particularly frightening because the newborn’s arm often hangs limply from their shoulder. Fortunately, most children born with Erb’s palsy fully recover.

What is Erb’s palsy?

Erb’s palsy is a type of brachial plexus injury (BPI) that causes arm weakness and lack of motion.

More specifically, Erb’s palsy occurs when certain nerves of the brachial plexus (the nerves between the neck and shoulders) are stretched, compressed, torn, or otherwise injured. The condition is named for Wilhelm Erb, the doctor who first described the condition.

Symptoms of Erb’s palsy include:

How common is Erb’s palsy?

Erb’s palsy is one of the most common neurological birth injuries, impacting roughly 2 of every 1,000 newborns.

Erb’s palsy impacts roughly 2 out of every 1,000 newborns. Tweet this

Fortunately, the vast majority of newborns (80-96%) fully recover from Erb’s palsy in the first few months. For newborns who don’t recover by 5 or 6 months, surgery can generally improve the outcome. Surgery usually takes 1 of 2 forms:

It’s very rare for a child to be left with a significant disability as a result of Erb’s palsy.

Erb’s palsy in newborns usually occurs during a difficult delivery. For example, the newborn’s shoulders may get wedged within the birth canal, requiring some force to pull the baby from the birth canal. Erb’s palsy is commonly associated with:

Can you sue for medical malpractice if your baby develops Erb’s palsy?

When a newborn has Erb’s palsy, it’s often assumed that poor obstetrical technique is to blame. However, healthcare professionals are not liable for every birth injury that occurs. Some birth injuries are necessary to avoid greater harm. For example, a doctor may have to use extra force to remove a newborn from the birth canal in order to prevent the newborn from suffocating.

What’s more, there is some evidence that Erb’s palsy can occur in utero before delivery.

In order to establish a medical malpractice claim based on Erb’s palsy, you need to prove that:

Real Life Example:In 2004, Dr. Enrique Tomeu closed his Virginia Beach obstetrics practice after being sued 7 times for inflicting similar Erb’s palsy injuries during deliveries. In each case, the baby’s shoulder became caught behind the mother’s pelvic bone during delivery, and Dr. Tomeu engaged in allegedly over aggressive and unreasonable methods to remove the baby.

How long do you have to file an Erb’s palsy lawsuit?

The statute of limitations for medical malpractice claims varies depending on the state (usually from 1-6 years). However, in most cases, the clock won’t start ticking until the newborn turns 18. Nevertheless, it’s a good idea to talk to an attorney as soon as possible, as crucial evidence can become unavailable (witnesses can forget things, move, or die, etc.) if you wait too long.

What damages can you recover in an Erb’s palsy case?

Persistent Erb’s palsy can affect a child’s quality of life and self-esteem. The child may not be able to participate in certain sports, and day-to-day activities (such as buttoning a shirt) may be impacted.

Enjuris tip:Parents and children impacted by Erb’s palsy can join the United Brachial Plexus Network, where they can find online support forums and other resources.

When a parent files an Erb’s palsy lawsuit on behalf of their injured newborn, the damages recovered belong to the newborn and are generally placed in a court-ordered trust. That way, the court can ensure the money is spent on the newborn.

A newborn in an Erb’s palsy case can generally recover the following damages:

How to find a birth injury attorney

You can use our free online directory to locate an experienced medical malpractice attorney who specializes in these types of cases. Most initial consultations with attorneys are free.