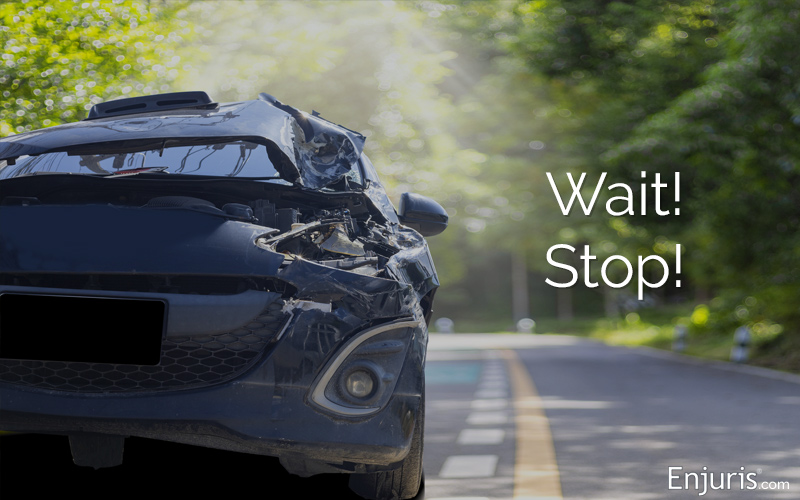 Leaving the scene of an accident in Alabama is considered a hit-and-run, and it’s illegal.

The penalties for leaving the scene of an Alabama car crash are a Class A misdemeanor for a property damage-only accident or a Class C felony for an accident that results in personal injury or death. Penalties range from one year and one day imprisonment to a maximum of 10 years, with fines up to $15,000.

A “hit and run” is an accident where the driver knowingly leaves the scene without providing contact information to the victim.

Every year there are roughly 700,000 hit-and-run crashes in the United States. Alabama consistently ranks somewhere near the 15th worst state for hit-and-run car accidents.

Whether you’re the victim or perpetrator of a hit-and-run, we’re here to help.

How do I avoid a hit-and-run charge in Alabama?

Most people understand that a hit-and-run refers to a crash in which one of the parties involved fails to stop at the scene of the accident. But, as is often the case with the law, it’s actually a bit more complicated than that.

To avoid a hit-and-run charge in Alabama, you need to do 3 things after an accident that results in injury, death, or property damage:

If the vehicle you hit is unattended, you have to take 2 steps to avoid a hit-and-run charge:

Similarly, if you hit a fixed object (such as a fence or utility pole), you must take 2 steps to avoid a hit-and-run charge:

Do I need to report a car accident?

Alabama requires the driver of any motor vehicle involved in a car accident to report the crash to the local police as soon as possible if the collision results in injury or death.

In addition to being required by law in some circumstances, it’s generally a good idea to call the police after an accident because police can help prevent any post-accident road rage incidents. What’s more, the police can collect information, investigate a crash, and draft an official report that could prove helpful if you later decide to file a personal injury lawsuit or insurance claim.

What are the penalties for fleeing the scene of a crash?

Think twice before fleeing a crash scene in Alabama because every person found guilty of a hit-and-run will be punished as follows:

What steps should I take if I fled the scene of a car accident?

There are all sorts of reasons you might drive away from a crash or collision that you were involved in:

Although the reasons for fleeing are typically selfish, there are some cases in which the trauma of being involved in a car accident causes the driver to behave in a manner they otherwise would not.

As Dr. Thomas Dalby, a professor of Psychology at the University of Calgary and forensics expert in the area of hit-and-runs, explained:

“There is a small, legitimate subsection where we see an adrenaline rush kick in, which can lead to confusion and panic.”

Regardless of the reason, fleeing the scene of an accident is always the wrong choice. If you recently failed to stop after a crash, we recommend that you take the following 2 steps to avoid making the problem worse:

What steps should I take if I’m the victim of a hit-and-run accident?

As for what you should do, try to stay calm and:

How do I recover damages if I’m the victim of a hit-and-run accident?

If the police are able to track down the person who fled the scene, you can sue them or file an insurance claim with their insurance company (assuming they caused the accident).

Real Life Example:Five-year-old Kamerynn Young was killed in Birmingham by a hit-and-run driver who was fleeing a traffic stop. Police were able to locate the damaged vehicle a short time after the accident and apprehend the perpetrator at the Flying J on Daniel Payne Drive.

The family of Kamerynn Young filed a wrongful death lawsuit against the perpetrator and his employer (the perpetrator was driving a company vehicle at the time of the crash). The lawsuit is currently pending.

Unfortunately, hit-and-run drivers are often not found. If this is the case, your insurance policy may still provide coverage.

Examples of optional coverage that might cover hit-and-run damages include: