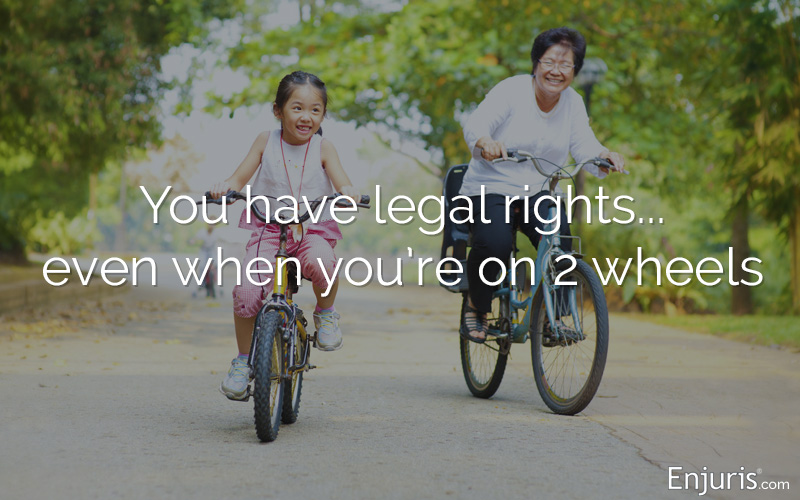 What to do after a bicycle crash or collision

When it comes to the most bike-friendly states, the League of American Bicyclists ranks Alabama 45th. The state’s poor ranking is due, in large part, to its lack of bike-friendly streets and laws favoring motorists.

Although its roads might not be the most hospitable, thousands of Alabamans choose to travel across the state on bicycles every day.

In this article, we’ll take a look at Alabama bike accidents, including the laws that impact bicyclists and how liability is determined following a bike accident.

Alabama averages about 263 bicycle crashes every year. Most bicyclists involved in crashes are between the ages of 31 and 40.

The Code of Alabama includes several statutes that address biking in the state. These statutes can largely be broken up into “rules of the road” and “bike safety laws”:

Enjuris tip:In addition to the laws listed above, municipalities may establish more comprehensive laws. It’s a good idea to check your municipal code every so often if you’re an avid biker.

Determining liability after a bike accident in Alabama

To recover damages after a bike accident, you need to prove that some other person (or entity) caused your bike accident.

Real Life Example:A 13-year-old boy from Hazel Green, Alabama was hit by a 2003 Toyota Sequoia and killed while riding his bicycle.

Neighbors disclosed that a street light was out that was supposed to illuminate the road where the child was hit. Neighbors added that cars often speed on the road.

Although a lawsuit has yet to be filed, both the driver of the vehicle and the town responsible for maintaining the street light is likely to be sued.

It’s not always clear who’s at fault for an accident. In many cases, the bicyclist bears at least some of the blame.

So what happens when a bicyclist is partially at fault for an accident?

Alabama adopted the pure contributory negligence rule. This rule says that, even if the injured party (the bicyclist) was 1% at fault for the accident, the injured party is prohibited from recovering ANY damages.

If the rule sounds harsh, it’s probably because it is. Alabama is 1 of only 5 states to adopt the pure contributory negligence rule.

Facing factsAccording to the ADOT, roughly 43% of all bicycle crashes were caused by the bicyclist in 2019.

Does insurance cover a bike accident?

If a bicyclist is hit by a car, the bicyclist can file an insurance claim against the driver’s auto insurance policy (assuming the driver was at fault).

But what happens if a bicyclist causes an auto accident?

Most auto insurance liability policies will NOT cover an accident that you caused while riding your bicycle. As a result, anyone injured in such an accident will likely sue you personally for the damages.

How long do I have to file a bike accident lawsuit (statute of limitations)?

However, there are a couple of exceptions to the above statute of limitations. The wisest thing to do is meet with a personal injury attorney as soon as possible after the accident. The attorney can ensure that you preserve your legal rights.

7 steps to take after a bike accident

The steps you take following a bike accident could have a big impact on whether you’re able to recover damages for your injuries.

Here’s what you need to do:

Ready to talk to someone about your bike accident? Contact an Alabama personal injury attorney near you using our free online directory today.