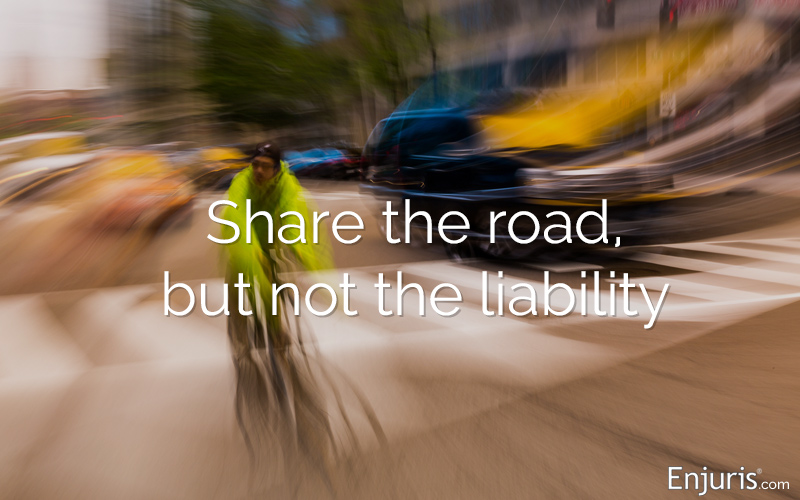 Table of Contents + show
Understand your rights and responsibilities as a bicyclist in the Evergreen State
How common are bicycle accidents?
Washington bike laws
Establishing fault in a Washington bicycle accident
Comparative fault and bicycle accident liability
Does insurance cover a bike accident?
Types of bike injuries and damages
Bicycle safety tips
What to do after a bike crash in Washington
Riding a bicycle in Seattle or elsewhere in Washington is safer than it is in most other states, but that doesn’t mean accidents don’t happen. Find out what to do after a bike accident, including how to determine who’s at fault and whether your insurance will cover your damages.

In 2019, Washington was named the nation’s most “bicycle friendly state” by the League of American Bicyclists for the 8th year in a row, but that doesn’t mean accidents don’t happen in the Evergreen State.

Whether you’re a seasoned rider or you’re thinking about purchasing your first bike, it’s important to understand your rights and responsibilities as a bicyclist in Washington state.

How common are bicycle accidents?

In the United States, bicycle deaths are at their highest number in 30 years. In 2018 (the most recent year for which data is available), 857 bicyclists were killed in traffic accidents.

Commentators point to several reasons for the rising death toll, including the fact that Americans are driving faster, logging more miles, and increasingly distracted by their phones.

The good news is that Washington is not among the most dangerous states for bicyclists (that honor belongs to California, Texas, Florida, and New York), but the state has seen its share of bike crashes.

Most of the laws impacting bicyclists in Washington can be found in Chapter 46.61 of the Revised Code of Washington.

Generally speaking, Washington bike laws can be grouped into 2 categories:

If a bicyclist is injured as a result of a dangerous condition (such as a large pothole or an obscured stop sign), the owner of the property can be held liable.

Enjuris tip:Public roads are owned by the town, city, or state. Plaintiffs must follow special procedures when suing the government. Failing to strictly follow these special procedures could result in the plaintiff’s claim being forever barred.

If you think you may have a valid lawsuit against the government, it’s a good idea to speak with an experienced personal injury attorney as soon as possible.

If your bicycle accident is caused by a defective bike component (such as a faulty brake system), the manufacturer can be held liable.

Real Life Example:Jose Pasillas, the drummer for the band Incubus, was riding his bicycle when out of nowhere the right handlebar allegedly “disintegrated,” causing the front wheel and handlebars to turn sharply.

The drummer broke his wrist as a result of the accident.

Jose filed a lawsuit against the bike manufacturer, claiming that the handlebar was defective. He is seeking reimbursement for his medical costs and lost earnings.

Bike accidents are often caused by motor vehicle drivers, poor road conditions, or defective bike components, but that doesn’t mean the bicyclist is always completely innocent. In some cases, bicyclists are partially at fault for their accidents.

Washington follows the pure comparative fault rule, meaning a plaintiff’s damages are reduced by their percentage of fault.

Chris is riding his bike south on Grand Boulevard in Spokane, Washington at 3:00 a.m. He does not have any lights or reflectors on his bike.

Chris fractures his arm and injures his back. He sues Kelly for $100,000. After a trial, the court decides that Kelly was 70% at fault for the accident (for driving while under the influence) and Chris was 30% at fault (for driving at night without a bike light).

Under Washington’s pure comparative fault rule, Chris would only be able to recover $70,000 (i.e., his court-awarded damages, minus the percentage of fault assigned to him).

Does insurance cover a bike accident?

Washington has a fault-based insurance system, which means that whoever causes an accident is responsible for paying the damages.

Most bicyclists understand that if a motor vehicle driver causes a bike accident, the injured bicyclists can file a claim against the at-fault driver’s auto insurance policy.

But what happens if a bicyclist causes an auto accident, or if the at-fault driver fled the scene and cannot be found? Who pays for damages?

Types of bike injuries and damages

As you might imagine, when a 17-pound road bike and a 4,500-pound motor vehicle collide, it’s usually the bicyclist who ends up with the more severe injuries.

A study conducted by researchers at the University of Washington School of Medicine found that most bicycle-related injuries occur to the upper or lower extremities, followed by the head, face, abdomen, and neck.

Enjuris tip:Most states allow punitive damages to be awarded for the purpose of punishing defendants for malicious, intentional, or reckless conduct. However, Washington, with few exceptions, does NOT allow plaintiffs in personal injury cases to recover punitive damages.

The Washington State Department of Transportation has gathered a number of safety tips designed to help keep you safe while riding a bicycle:

Enjuris tip:Here are some additional resources to help keep you safe:

What to do after a bike crash in Washington

The aftermath of a bike accident can be chaotic, but keeping these simple steps in mind can help improve your chances of recovering the damages you deserve:

Ready to talk to an attorney about your bike accident claim? Reach out to an experienced personal injury attorney in Washington using our free online directory.