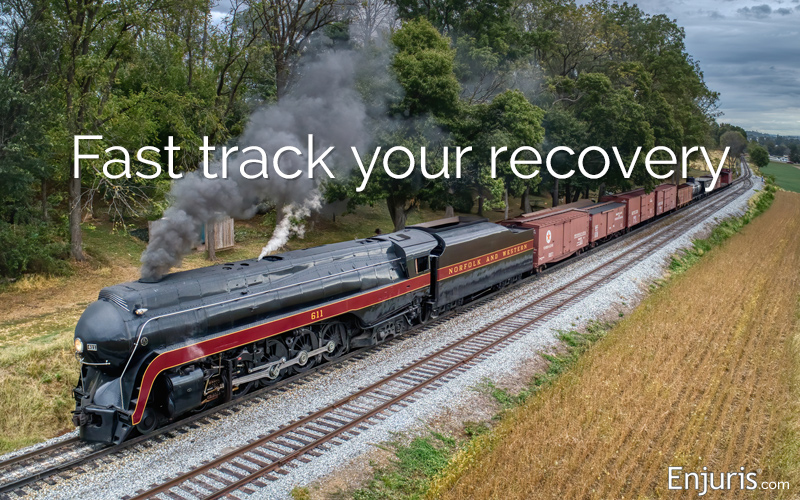 There are more than 4,700 miles of railroad track in Virginia. Though many of the trains traveling through the Old Dominion State transport freight, there are still several railroad services — including the Cardinal, the Crescent, the Virginia Railway Express, and the Tide — that transport passengers.

Facing factsIn 2019, 1,543 passengers boarded and detrained an Amtrak in Virginia.

Fortunately, train travel is extremely safe. According to the United States Department of Transportation, there are only about 5,800 train accidents every year nationwide (compared to 6 million car accidents).

Nevertheless, train accidents do happen and the results can be catastrophic.

Facing factsAccording to the Federal Railroad Administration, there were 25 train accidents and 98 train-accident fatalities in 2019.

Let’s take a look at the common causes of train accidents, who’s liable, and what steps you should take if you’re injured in a train accident in Virginia.

Most train accidents in the United States are the result of human error, such as failing to slow down when approaching a curve.

But sometimes trains crash for other reasons, including:

Real Life Example: Wreck of the Old 97
In 1903, the Southern Railway mail train (known as “Fast Mail”) derailed at the Stillhouse Trestle in Danville, Virginia. Eleven people were killed in the crash and several passengers were injured, making it the worst train crash in Virginia history.

A subsequent investigation found that the engineer had been operating the train at excessive speeds in order to maintain the train’s reputation for never being late. As a result, the engineer was unable to sufficiently slow the train as he approached the sharp curve leading into the trestle, causing the train to derail and plunge into the ravine.

The accident inspired Virginia musicians, G.B. Grayson and Henry Whitter, to record the ballad “Wreck of the Old 97,” which was later covered by Johnny Cash, Woody Guthrie, and several other famous musicians.

Who’s liable for a train accident in Virginia?

Railroad companies are considered “common carriers” in Virginia, which means railroad companies and their employees owe passengers and bystanders a duty to exercise the highest degree of care to avoid causing injury to them or their property.

But there are other parties who might have caused or contributed to the accident, including:

An investigation conducted by the National Transportation Safety Board found that Naylor was intoxicated and drove the garbage truck around lowered crossing-gate arms onto the tracks, where it was struck by the train.

The lawsuits are still pending.

What damages can be recovered in Virginia?

If you’re injured in a train accident in Virginia, you can recover the following damages:

If someone was killed in a train accident, certain members of their family can recover damages by filing a wrongful death lawsuit against the at-fault party. The damages that can be recovered in a wrongful death lawsuit are intended to compensate the family member for their loss and include things like loss of support, loss of services, lost prospect of inheritance, and funeral expenses.

Enjuris tip: To ensure that you receive the compensation you deserve, it’s important to keep track of all the losses that stem from your accident. Our medical expenses worksheet and post-accident journal form can help you keep track.

There are some significant differences between FELA claims and workers’ compensation claims:

FELA also requires railroad companies to meet certain standards. The failure to meet these standards provides a basis for recovery. These standards include:

Steps to take after a train wreck

If you’ve been injured in a train accident, the first thing you should do is seek medical attention. Keep in mind that many serious injuries don’t show symptoms until hours, days, or even weeks after an accident. Regardless, it’s important to establish a record of medical treatment so the defendant can’t claim that you weren’t really injured or that you failed to mitigate your damages.

Once you’ve called an ambulance, you should:

We hope you never experience a train crash. But if you do, we hope you’ll schedule an initial consultation with an experienced attorney so you can learn about your options.