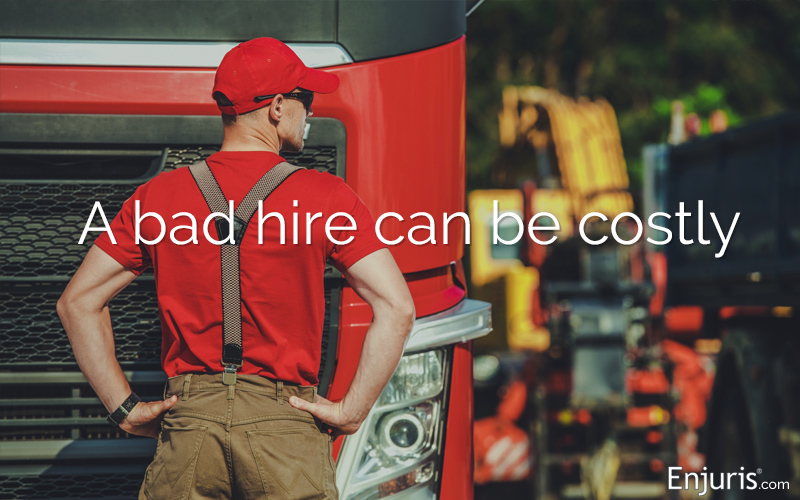 What is negligent hiring and will it affect my truck accident case?

Trucking companies may be held legally responsible for the harm caused by their truck drivers under the doctrine of respondeat superior.

Let’s take a closer look at negligent hiring as it relates to truck accidents.

What is negligent hiring?

Under the doctrine of negligent hiring, an employer can be held liable for the harm their employee inflicts on a third party if the employer knew or should have known that the employee posed a risk of inflicting the harm.

The doctrine of negligent hiring is most often used in cases where an employer hires an employee with a criminal record.

John Doe Trucking Company hired a truck driver to deliver exercise bikes and set them up in the homes of customers. The trucking company did not contact the driver’s previous employer or run a background check. The driver they hired had a sexual assault conviction on his record and was fired from his previous delivery job for stalking a woman he met while delivering exercise equipment.

A month after he was hired, the driver sexually assaulted a customer.

John Doe Trucking Company is most likely liable for the customer’s damages under the doctrine of negligent hiring because the trucking company should have known that the employee posed a risk of inflicting harm by conducting a simple background check.

What is negligent retention?

A similar legal doctrine called “negligent retention” can be asserted when an employer retains an employee after learning that the employee poses a risk of inflicting harm.

John Doe Trucking Company hired a truck driver with a clean record and good job references to deliver exercise bikes and set them up in the homes of customers. Soon after hiring him, the trucking company began getting calls from customers complaining that the driver made inappropriate sexual comments.

John Doe Trucking Company did not take any action.

A short time later, the driver sexually assaulted a customer.

John Doe Trucking Company is most likely liable for the customer’s damages under the doctrine of negligent retention because the company failed to fire the driver or take some other action after learning that the driver posed a risk of inflicting harm.

Why file a negligent hiring or retention lawsuit?

Plaintiffs often file negligent hiring claims to get around the fact that an employer can’t be held liable for the intentional acts of their employees under the doctrine of respondeat superior.

What’s more, plaintiffs often file negligent hiring claims (in addition to negligence claims under the doctrine of respondeat superior) because it improves their chances of recovering punitive damages.

Leroy’s Trucking Company interviewed a truck driver for a job transporting hazardous materials. The truck driver had numerous traffic violations and was fired from his last trucking job for causing an accident after running a red light. The trucking company didn’t bother pulling the driver’s Motor Vehicle Record (MVR) and hired him on the spot.

During his 1st week on the job, the driver ran a red light and crashed into a vehicle driven by Jane.

In the above hypothetical, Jane will probably not be able to recover punitive damages based on her negligence claim because the truck driver’s actions (running a red light) weren’t egregious enough to justify a punitive damages award.

How do you prove negligent hiring?

The specific elements a plaintiff needs to prove to establish a negligent hiring claim vary by state. But generally speaking, the plaintiff must prove that:

Real Life Example:In Guidry v. National Freight, a long-haul truck driver applied for employment with a trucking company. The driver stated in his employment application that he had no criminal record. In fact, the driver had a long history of sexual misconduct.

The trucking company never confirmed the statement, never conducted an independent investigation, and never contacted the driver’s previous employer. The driver was hired.

While driving through the city of Austin, the truck driver stopped and parked his truck at a building to stretch his legs. The driver left the truck in the parking lot and wandered through an adjacent neighborhood. He eventually reached a condominium complex parking lot where he raped a woman.

The woman filed a lawsuit against the trucking company based on the negligent hiring of the truck driver.

The court ruled in favor of the trucking company. In doing so, the court explained that the harm was not foreseeable because the employee should never have come into contact with the plaintiff in the exercise of his duties as a truck driver. The court explained that this situation was different from a situation in which an employer hires an employee to go to a customer’s home to sell or deliver its product.

Do trucking companies have a legal obligation to conduct background checks?

If a truck company fails to adequately inspect a driver’s history, they may face federal penalties. In addition, the evidence can be used to support a negligent hiring claim.

Do I need a lawyer for my negligent hiring case?

Any time you suffer physical injuries in a truck accident, you should strongly consider hiring an attorney to ensure you get the past and future damages you deserve.

Need legal advice? Consider using our free online directory to locate an attorney in your area.

Once you’ve found an attorney, take a look at the following resources to prepare for your initial consultation: