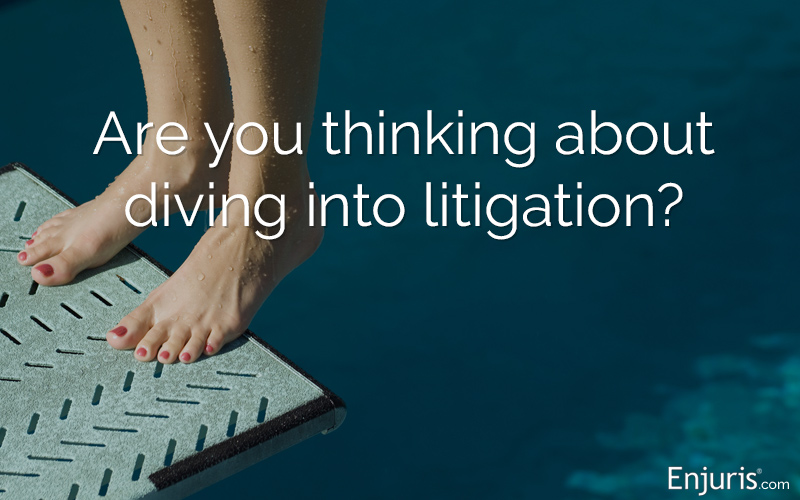 Who’s liable when someone is injured or drowns in a swimming pool accident?

The hottest temperature ever recorded in Tennessee was 113 degrees Fahrenheit. What’s more, Tennessee is the 13th hottest state when it comes to average summer temperatures.

Private and residential swimming pools, as well as lakes and rivers, are immensely popular in the Volunteer State.

Unfortunately, swimming comes with risks. In this article, we’ll take a look at swimming pool injuries, the laws intended to keep swimmers safe, and when a swimming pool owner can be held liable.

Though swimming pool injuries impact all age groups, children under the age of 15 are by far the most impacted in the United States.

Facing factsIn Tennessee, children drown at a rate slightly higher than the national average. The most drowning deaths are among boys under the age of 4.

Swimming pool injuries can be minor or severe. Some examples include:

What are the most common causes of swimming pool injuries?

The Centers for Disease Control and Prevention (CDC) warn that most swimming pool injuries are a result of inadequate supervision or lack of swimming ability. Nevertheless, there are a number of factors that may contribute to swimming pool injury:

The hotel advertised itself as a water park, but had no lifeguards on duty (in violation of state law) and lacked a working emergency telephone when Raymond’s son drowned.

When are residential swimming pool owners liable in Tennessee?

The vast majority of swimming pool accidents happen at home.

Facing factsAccording to Stanford Children’s Health, drownings are the leading cause of unintentional death in children ages 1-4 and ages 10-14. Most childhood drownings occur in the child’s home pool, and roughly ⅓ of total drownings occur in pools at the homes of friends, neighbors, or relatives.

What does a swimming pool owner have to do to exercise reasonable care?

Premises liability laws require swimming pool owners in Tennessee to either remove or warn against any dangerous conditions they actually know about or should know about.

Common dangerous conditions with respect to swimming pools include:

Notably, the owner of the daycare had previously been ordered to cease operating the daycare due to various complaints about poor supervision made to the Tennessee Department of Human Services.

The lawsuit is pending.

Additionally, there are a number of specific state and local regulations pertaining to private pool owners. Here are some of the highlights:

If a swimming pool owner violates one of the state or local regulations, they’ll likely be liable for any injuries that result.

What about injuries that occur in public pools?

Just like owners of residential pools, public pool owners (usually the town, city, or state) can be held liable if a swimmer is injured because the owner failed to exercise reasonable care.

What’s more, public pool owners must adhere to the state regulations found in Chapter 1200-23-5 of the Rules of The Tennessee Department of Health Bureau of Health Services Administration.

For example, 1200-23-5.02 requires that all public pools have at least 1 certified lifeguard (more lifeguards may be necessary depending on the size of the swimming pool).

What defenses do pool owners have?

There are 2 defenses that pool owners are likely to raise in a lawsuit stemming from a swimming pool accident:

Real Life Example: Debbie Vancleave was a guest at the home of Mathew Markowski in Madison County, Tennessee. While Debbie was walking behind Mathew on the deck area around the swimming pool, she fell into an opening that was 18 inches wide and 3 feet long. The opening normally contained a skimmer used for cleaning the pool, but it had been removed for the fall and winter months.

Debbie filed suit alleging negligence and Mathew filed a motion to dismiss the lawsuit based on the fact that the opening in the deck was an “open and obvious condition.” The trial court agreed with Mathew, finding that “the plaintiff was injured on an opening in the deck which was clearly visible and not concealed and that anyone walking on the premises should have been able to observe.”

What damages can a person injured in a pool accident recover?

Tennessee allows plaintiffs to recover both economic and non-economic damages:

In rare cases, when the defendant acted maliciously, fraudulently, or recklessly, plaintiffs may be able to recover punitive damages. Punitive damages are intended to punish defendants and deter similar actions in the future.

Enjuris tip: Learn more about the value of a personal injury claim in Tennessee.

How long do I have to file a lawsuit based on a pool injury?

In most cases, a plaintiff has 1 year from the date of the injury to file a lawsuit.

But there is an important exception:

If a child under the age of 18 is injured, the statute of limitations doesn’t start running until the child turns 18.

Enjuris tip: Learn more about the statute of limitations in Tennessee.

Think you're ready to discuss your pool injury with a lawyer? You can find one near you using our free online directory.

Enjuris now partners with Pool Safely to help prevent child drownings
Pool Safely is a national public education campaign from the U.S. Consumer Product Safety Commission (CPSC). Learn more about how Enjuris and Pool Safely help make water play and summer fun safer for families!
Downloads:
Free personal injury guides for download to print or save. View all downloads.
Tell your story:
Tell your story - What would you want others to know? Tell us what happened in your accident, and how life has changed for you.
Find an attorney:
Search our directory for personal injury law firms.
See our guide Choosing a personal injury attorney.