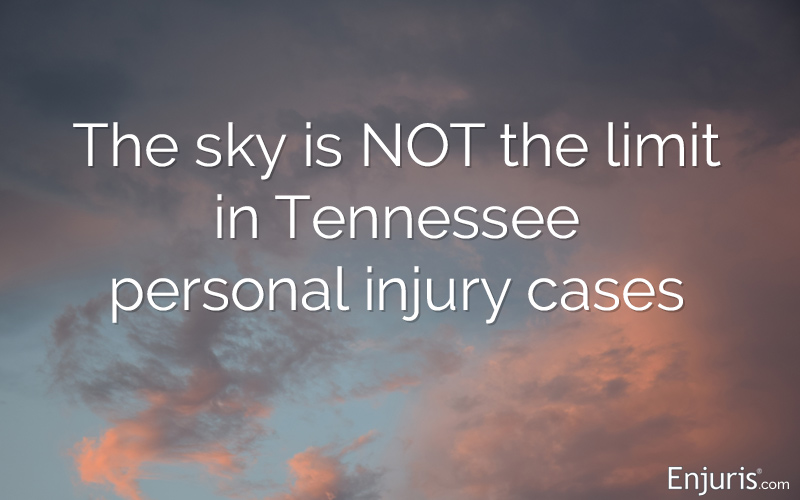 There are limits to your financial recovery in the Volunteer State

Table of Contents + show
There are limits to your financial recovery in the Volunteer State
Types of damages available in Tennessee
Tennessee damage caps
Workers’ compensation claims
Comparative fault in Tennessee
Challenges to Tennessee’s damage cap laws
In a personal injury lawsuit, you may be able to recover economic damages, non-economic damages, and punitive damages. However, Tennessee limits the amount of damages you can recover in certain cases.

The term “damage cap” refers to a law that limits the amount of compensation an injured person can recover in a lawsuit.

The purpose of a damage cap is to prevent juries from awarding excessive amounts of money and to prevent the costs of transacting business from becoming unreasonable.

Tennessee has damage caps but only on certain types of damages. Let’s take a closer look at the role of damage caps in Tennessee personal injury cases.

Types of damages available in Tennessee

In order to understand damage caps, it’s important to understand the types of damages that are available to accident victims in Tennessee.

Tennesseans can recover the following types of damages in a personal injury lawsuit:

Jodi McClay filed suit against Airport Management Services LLC seeking damages for injuries she sustained in a store in the Nashville International Airport.

A jury returned a verdict for Ms. McClay in the amount of $445,500 for economic damages. Additionally, the jury awarded $930,000 for non-economic damages (including pain and suffering and loss of enjoyment of life).

The court applied the statutory damage cap, which reduced the $930,000 non-economic damage award to $750,000. Airport Management Services LLC appealed the case to the Tennessee Supreme Court, arguing that the cap on non-economic damages was unconstitutional.

Additionally, Tennessee places a cap on punitive damages in the amount of $500,000—or twice the amount of the compensatory damages awarded, whichever is greater.

Tennessee’s statutory caps limit non-economic damages to $750,000 in most civil liability actions, and limit punitive damages to $500,000 or twice the amount of compensatory damages (whichever is greater). Tweet this

In a workers’ compensation claim, an injured employee is entitled to lifetime medical and compensation benefits, but the total compensation that can be awarded is capped by law depending on the date of the injury.

Enjuris tip: Find out the maximum amount your workers’ compensation claim is worth using the Tennessee Department of Labor and Workforce Development’s compensation table.

Tennessee follows a “modified comparative fault rule,” which reduces the amount of damages a plaintiff can recover by their degree of fault. What’s more, if the plaintiff is determined to be 50% or more at fault, the plaintiff is barred from recovery ANY damages.

Under Tennessee’s modified comparative fault rule, Matt is only allowed to recover 80% of his damages ($80,000).

While the modified comparative fault rule isn’t technically a “damage cap,” it does represent a potential limitation to the amount of damages you can recover in a personal injury lawsuit.

Tennessee, like most states, faces frequent challenges to its damage cap laws. In addition to the challenge to its non-economic damages cap discussed above, the Sixth Circuit Court of Appeals found that Tennessee’s statutory cap on punitive damages violated Tennessee’s constitution in 2018. However, Tennessee state courts are not required to abide by the federal court’s decision.

Such challenges to Tennessee’s damage cap laws underscore the fact that the law can change at any moment. Consequently, it’s important to talk to a lawyer before you file your lawsuit to see if any changes have occurred.

Want to get a better idea of how much your injury claim is worth? Use our free online directory to reach out to an experienced Tennessee attorney today.