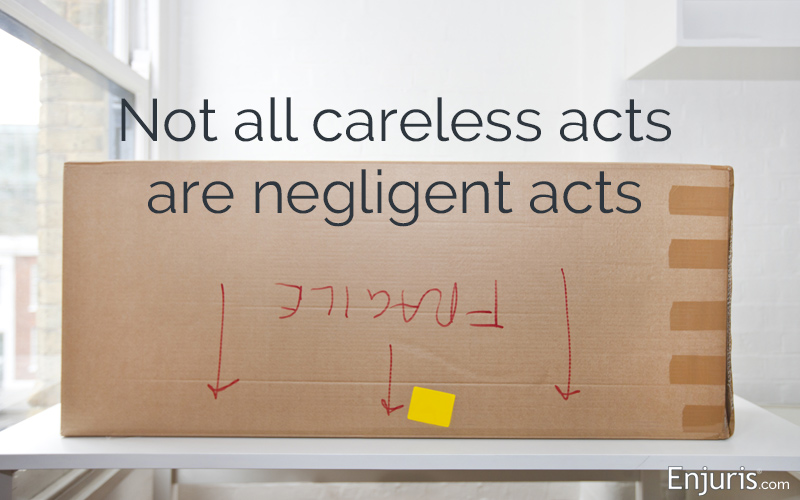 To recover damages after an accident, the accident must have been caused by someone else’s intentional actions or carelessness.

The legal term for an accident caused by someone’s carelessness is “negligence,” and the vast majority of personal injury cases in Tennessee are negligence cases.

In this article, we’ll look at negligence laws in the Volunteer State.

Negligence is the failure to exercise the appropriate level of care. To put it another way, a negligent act is an act that involves an unreasonable risk of causing harm.

Establishing the elements of negligence in Tennessee

Negligence is a legal theory. All legal theories are made up of elements. Each element must be proven in order to establish the legal theory and recover damages.

The 3 elements of negligence are:

Let’s take a closer look at each of these 3 elements.

1. The duty element of negligence

In general, people owe a duty to adhere to a standard of reasonable care while performing acts that could foreseeably harm others. For example, drivers owe all others on the road the duty to exercise reasonable care to avoid harming them.

In some cases, the standard of care owed is more specific. For example, premises liability laws in Tennessee  dictate that property owners owe certain specific duties (such as searching for dangerous conditions) depending on the classification of the person injured.

Real Life Example: Maud Schindler was late catching a bus outside of Harvey’s Store in Nashville, Tennessee. When she spotted the bus waiting at a stoplight down the road, she ran to the bus and asked the driver to open the door.

The driver opened the door and the door struck Maud and knocked her down. Maud suffered serious injuries as a result and sued the bus driver.

Other examples of different types of individuals and their respective duties of care include:

2. The breach element of negligence

There is no simple formula for determining whether a defendant breached the applicable standard of care. Often, the determination is based on whether the defendant should have foreseen the harm.

Would an ordinary person in the defendant’s position have anticipated the harm that ultimately resulted?

In the case of professionals (especially those in highly-technical fields, such as doctors and pilots), experts are typically brought in to testify as to the industry norms and whether the professional’s conduct fell within those norms.

3. The causation element of negligence

Just because someone acted carelessly, doesn’t mean they were negligent. In order to be negligent, the defendant’s carelessness must have caused the plaintiff’s injury.

James is driving his car down I-40 in Memphis when he loses control on the slick pavement and crashes into a tree.

Hank, driving home from a softball game, sees the accident and pulls over to help.

When the police arrive they administer first aid to James. The police also realize that Hank is clearly intoxicated and they arrest him for driving under the influence.

In this example, Hank clearly breached his duty to exercise reasonable care by driving while intoxicated. However, Hank’s breach didn’t cause or contribute to James’ accident and therefore Hank would not be found negligent for James’ injuries.

What is gross negligence?

In Tennessee, punitive damages are available if the defendant acted with “gross negligence.”

So what is gross negligence and how does it differ from ordinary negligence?

A person acts with gross negligence if they act with a “reckless disregard for the safety of others.”

To put it another way, a person who acts with gross negligence creates such a significant risk of serious bodily injury or death that their actions must be considered something more than careless.

Let’s look at 2 examples to illustrate the difference between ordinary negligence and gross negligence:

Brian fires his gun into the sky while standing on the sidewalk. As he’s firing the gun, he slips and accidentally shoots and injures a bystander.

The act of shooting a gun into the sky on a sidewalk is careless, but probably not reckless.

Brian fires his gun into a crowd gathered on the street.

Firing a gun into a crowd is more than just careless, it creates such a significant risk of serious bodily injury or death that it’s considered grossly negligent.

Under the doctrine of negligence per se, the defendant’s law-breaking act serves to establish the first 2 elements of negligence automatically.

In other words, if negligence per se applies, the plaintiff doesn’t need to prove that they were owed a duty or that the defendant breached the duty.

So when does negligence per se apply in Tennessee?

Negligence per se applies in situations where the defendant breaks a law that:

Tennessee follows a “modified comparative fault rule,” which reduces the amount of damages a plaintiff can recover by their degree of fault. What’s more, if the plaintiff is determined to be 50% or more at fault, the plaintiff is barred from recovery ANY damages.

Tammy is late to watch a show at the Ryman Auditorium in Nashville, Tennessee.

After an employee scans her ticket, she immediately starts running down the hall to reach the door that leads to her seat despite the clearly-posted “no running” signs. Tammy trips and falls on a broom that was left on the floor by a janitor who works for the venue.

Tammy suffers a serious hip injury and sues the Ryman Auditorium for $100,000.

Under Tennessee’s modified comparative fault rule, Tammy is only able to recover $70,000 (70% of her damages).

Do you think someone’s negligence or gross negligence caused your injury? Reach out to an experienced Tennessee personal injury attorney today.